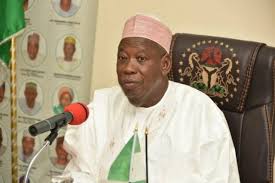 There is growing concern and apprehension among the Southerners, over growing cases of Almajiris ferried in trailers and trucks from the Northern part of the country that has been their habitat from time immemorial to the Southern part of Nigeria.

For the past three weeks even with the existing presidential directive banning interstate travels and curfew, Nigerians have been inundated with reports of trailer loads of Almajiris intercepted on the their way to the south.

One of such incidents occurred in Gakem border of Cross River  state  some two weeks ago when a truck load of 120 Almajiris was intercepted while entering the state and the Governor, Ben Ayade was  said to have ordered them back from where they came.

The same scenario took place in Ogun as a truck carrying 30 Almajiris from the North bound to the state was intercepted.

On May 5, the government of Enugu State reportedly intercepted a total of 9 buses ferrying Almajiris into the state.

Ondo has also recorded a fair share of the ongoing repatriation of these homeless street boys that eke a living by begging and stealing in some cases. As residents were thrown into panic when a contingent of Almajiris from Sokoto State were dumped in the state.

Another case was reported early last week again, in Enugu as 15 men of Northern extraction hidden on the floor of a truck loaded with cattle were fished out by eagle eye security operatives and returned back.

Last weekend Lorries loaded with Almajiris were intercepted in Oyo state and were ordered back to where they came from.

This development is currently a subject of discourse and concern among the people of the South East, South South and South West that are now witnessing the  influx of these homeless boys from the North.

For many concerned people in the Southern part of the country, there are fears that it is a jihadist plot to swell the region with the Almajiris who would then be used as street soldiers to conquer the area. Others feel it could be a subtle way of transporting Boko Haram to the south.

Beyond this, many concerned people in the region, question how these street urchins were able to be transported from the far flung North to the South when security personnel are on the road to enforce restrictions  of movement on interstate travels  due to the  lockdown which is still in existence.

National Chairman of Pan Niger Delta Forum, Rtd Commodore Idongesit Nkanga wants an explanation from President Muhammadu Buhari to give  the reason for the occurrence even with the lockdown he ordered as the Almajiris are being transported in trucks without being detected and stopped by the security agents on the road.

Governor Ifeanyi Okowa of Delta State last week also raised c alarm over the organised influx of the homeless  youths to the South and urged stakeholders in the region to watch with keen interest the development.

Beyond the legitimate fear of these boys turning into terrorists and criminal gangs in the South, another major concern is the fear that most of them having lived in the street are major carriers of Coronavirus pandemic  and thus, will further spread the virus down South especially the south East and Niger Delta that has recorded lower cases than the south west, particular, Lagos and the North.

The repatriation of the Almajiris was kick started by Kano State governor Umaru Abdullahi  Ganduje following the unprecedented deaths that occurred in the state which were later linked to Covid-19 and the Almajiris that live in the streets were fingered as the major carriers prompting the governor to repatriate them to their state of origin.

Before that, Governor El-Rufai had advocated the need to end Almajiri system in the North. He lambasted Northern elders for allowing such a system to exist for so long.

Kano, it is on record repatriated 1500, Kaduna according to Governor El-Rufai over 30,000 Lmajaris, had been deported  to their varous states, since the 19 states  governors took the decision to do so. Adamawa state was said to have repatriated 400 of them to their indigenous states, Taraba 100, Bauchi repatriated 819 but received 904 in return. Nassarawa is also among the states that had repartrated the  Almajiris in the state.

Findings by The Value News indicate that some of the Almajiris who are usually hidden in trucks carrying food items and cattle while on their way to the South do not fall among those officially repatriated by  the state governments, but were just smuggled into the trucks.

Before the wave of repatriation which has taken a new dimension with the boys sent to the South  from the north, some notable Northerners like Balarabe Musa, a former Governor of Kaduna State lad lambasted the Governors for the plan, arguing that it would have been rather worthwhile for them to rehabilitate these boys.

Northern Elders Forum, popular, NEF, equally shared the same sentiments, but what is most worrisome is why the repatriation of these boys who are from Northern extraction to the South.

Kano State Governor, Ganduje, has said the repatriation of the  Almajiris to their states of origin was a collective decision of the Northern Governors’ Forum.

The Almajiri system in Northern Nigeria started around the 11th century in Kanem-Borno and was later replicated in the Sokoto Caliphate after the triumph of the Jihad led by Sheikh Uthman Dan Fodio. Both empires not only promoted the scheme but also supported it with public finances. Asides the authorities’ recognition and promotion, the scheme also enjoyed the support of other major stakeholders, such as the community, the parents and the pupils themselves.

In 1904, when the British invaded and colonized Northern Nigeria, they manned the treasury and abolished state funding of Almajiri school system, which they saw as mere religious schools. “Boko”, meaning western education, was introduced and funded instead. This development made Islamic scholars unqualified for employment and participation in politics. This further increased the poverty situation, as Mallams (Teachers) lost their jobs because of lack of western education (the only criteria for white-collar jobs) which was only available for educated individuals. With the loss of support from the government, the helpless Emirs and increasing number of students to cater for, the care of the Almajiri became overwhelmingly burdensome for Mallams who were left with no choice but to send these young pupils out to beg for alms.

An Almajiri, usually, is expected to be educationally oriented in the tenets of Islam in his early childhood to groom him for a decent Muslim adulthood. But the common norm in Northern Nigeria today has deviated from this practice, giving way to a mob of bowl-carrying children wandering the streets in search of one thing or the other. Begging is the most discomforting aspect of the Almajiri system as it brings the pupils out of the supervision of the Mallams and gives them away to negative habits as they come in contact with morally deficient people such as prostitutes, cultists, terrorists.

The present day Almajiri, who are victims of neglect and exploitation are seen everywhere singing and begging for food and money, being vulnerable to abuse, drugs, trafficking and various forms of exploitation. Their condition of living is generally below average as shown in their torn, dirty looking cloth, hungry stomach, and unkempt body.

These Almajiri are mostly found far away from their places of abode in search of Islamic knowledge, which means they do not reside with their biological parents, who for religious permissiveness, marry as many wives as possible and produce scores of children without any sense of responsibility. These children are dumped in Almajiri schools because Islamic education is free; and in most cases, some of the parents never show up again, let alone cater for their children.

But many Nigerians have continued to lay blame on Northern elders and public office holders for not doing much for the youths in the area that constitute the Almajiris inspite holding long to political offices years.

Like Mr Stephen Edem, a business man put it “ They ruled this country for so many years yet the level of poverty in the North as shown by Almajiris is more than the South. They should keep them there and not transport to us, we have our own vulnerable children to take care of”.