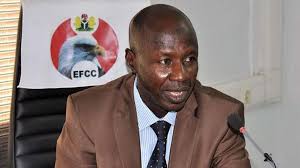 Between the last the two years and now , the Ibrahim Magu, led Economic and Financial crimes Commission, EFCC, and Patience Jonathan,a former Nigeria First Lady and wife of former President Goodluck Jonathan have been in the Court over alleged Corruption  case against the later.

The anti-graft agency  was said to have filed an exparte motion seeking  for an interim  forfeiture  of the sum of an alleged N1, 494,0000.00    fund hidden away  in the bank account of   Magel Resort Limited, a Company which was also linked to her.

The anti-graft agency claimed that it got to know about the secret account through credible intelligence report alleging  that a ”bank  domiciled in Fidelity was said to stored  huge amount of money that is not being used for anybody.

The agency may have become suspicious about the account when it was found that nobody was actually operating it the secret account. Acting on the intelligence report ,it was said to have conducted a  preliminary investigation ,  which was said to have exposed the former first lady and some blood relations of Jonathan, the erstwhile President were  Directors of the Company.

Given an insider information, the Commission  disclosed that the first  N500million was deposited on the account on May 20, 2015 in the bank, nine days to the  handover of power to President Muhammadu Buhari, who won the 2015  Presidential election on the ticket of the All progressive Congress, APC by one Esther Fyface, who was alleged to be in-charge of the Company

The that the additional one billion allegedly transferred in two May 25, 2015 Pagmat OIL and Gas Nig lt, a company it made Nigerians not the Corporate Affairs Commission, CAC. The EFCC legal team may not have rested on their oars as they have pursued the with all the evidence to show that the amount was not legitimately earned by the then first lady. The anti-graft had secured an interim order to freeze the erstwhile first lady’s alleged Company,  Magel Resort  Limited account number 0401101954 maintained with Fidelity The trial Judge Lewis Alagoa, was said to have given the interim order for the forfeiture of the amount linked to Dame Jonathan, the wife of  the then  President.  The trial Judge, the Commission in a had ruled that the the Treasury Single Account of the government with the Central Bank of Nigeria, CBN.  first lady found in the defunct Skye Bank now bank. In giving the interim forfeiture order,  for the forfeiture of the money found in also ordered forfeited amount be Single Treasury Account of the government with the Central Bank of Nigeria, CBN.   The Value news was jubilation in government circles over the Court ruling that Dame Jonathan must forfeit the secret money lodged in Skye now to the government. This may have swollen the money recovered for the government over the last three years to over N800 billion.

This may not be the only case between the Commission and the former first lady. Recall that she had Commission to Court demanding N200 million as damages for infringing on her rights.  She had also requested the issue an order discharging  the freezing restraining the further placing a freezing order on her accounts. The former first lady may have won one of her cases against the anti-graft agency unblocking her domiciliary account containing  $5,842,316,.66  at defunct Skye Bank, now Polaris, which is under a different management team.  Also, affected by the same Court accounts of five companies, linked to holding  N7.4 billion. The affected to Dame Jonathan, which the Court had the EFCC, must not freeze its account in the   Finchley Top Homes ,  Aribawa Ariera Reachout Foundation, Magel Resort , AM-PM Global Network Oil and Gas the account of Esther Oba holding $ The said to have been located into six different banks  President Muhammadu Buhari did not find it funny EFCC losing the case to Mrs. Jonathan. His anger was well expressed when he told Walter Kanu Onnoghen , the suspended Chief  Justice of Nigeria, CJN, last April, in the Presidential Villa, that the anti-corruption war was losing steam which  the embattled CJN, clearly told him, that the anti-graft agency have opportunity to appeal against any Judgment  they may have lost in Court.  This is not what the Katsina state born Nigeria President want to to see the former first lady losing the billions of naira allegedly found in the companies linked to her Bank accounts.

The EFCC may have queued into Onnoghen’s position in Law that if you lose a case and you know you have enough to get Justice from the Court, the best to do is to appeal against the subsisting Judgment.

The Commission, which lost million corruption case against  Sani a former governor of Taraba, was said hint of going to appeal against the Court ruling. The erstwhile governor, along with two others, Joel Ikenya and  MARK Useni,  were said to have dragged by the anti-graft agency over and financial regulations which was an outcome of their investigation.  The agency may be optimistic of jailing Danladi, the former Taraba governor as two former Independent National Electoral Commission, were said to have been on January 25, 2019, for similar . The Commission which did not find the Court ruling on the former governor described it as ”worrisome and tragic’