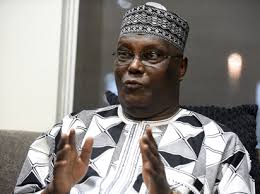 The last may not have been heard about the February 23, 2019, Presidential  election, which produced Muhammadu Buhari, a retired Army General  and the incumbent President who contested the election on  the platform of the All Progressive Congress, APC, as the President elect. This is because . This is because Atiku Abubakar,  a former Vice President and Presidential Candidate of the People’s Democratic Party, PDP, has formally petitioned the three man election Petition Tribunal to order the Independent National Electoral Commission, INEC, to declare him the winner of the last Presidential election.

Recall, that  Abubakar, a retired Deputy Director of the Nigerian Customs Service, NCS, a Paramilitary  Organistaion who believes  he was robbed of victory by the president Muhammadu Buhari, of the All Progressive Congresss, APC, with the  alleged active connivance of officials of INEC and security agencies operative, has cried out that the Commission was frustrating his efforts to access the electoral materials  used during the conduct of the Presidential and National Assembly election as earlier granted by the Tribunal which was set up by Ibrahim Tanko Mohammed, acting Chief Justice of Nigeria, CJN.

Note that Atiku had dragged INEC and the APC, including Buhari, the President elect to the Tribunal, in readiness to head to the Appeal Court and the Supreme Court if the Judgment of the Tribunal did not favour him.  But the PDP Candidate had raised alarm  that the electoral umpire has refused to allow him access to inspect the electoral materials used during the conduct of the Presidential and National Assembly election on February 23, 2019, as granted by the Tribunal, an indication that the election was rigged.

The PDP Candidate had said that the purported  refusal to allow him inspect the electoral materials  by the Commission  was a deliberate ploy to ambush his case at the Presidential election Tribunal. The aggrieved Adamawa state born politician and the Turaki of Adamawa state, said ”it is imperative  to inform Nigerians  that upon  obtaining  the lawful  order  of the Court, directing INEC, to avail me  and my party the copies  of all the documents  and other materials used for the election the Commission has refused to do so”.

Kola Ologbondiyan, the National Publicity Secretary of the PDP, disclosed that the PDP legal team had written the INEC  Chairman  on the 11th and 12th March, 2019 , respectively, causing the Tribunal order to be served  the  Commission and requesting access to the election materials.

He noted  that despite  being served with the Tribunal order and several follows, INEC , has bluntly refused  to all the PDP and its Presidential Candidate in the last election have access to the electoral materials and documents, let alone inspecting them.

The PDP Spokesperson maintained that  there was no basis for the Commission to have denied them access to inspect the electoral materials  having been served  with the order  by the Tribunal to do so. It is worthy of note that Buhari, the  APC Candidate and President , has also been given the nod by the Tribunal to Inspect the materials when he approached the Tribunal through his Lawyers.

But Rotimi Onyekanmi, Spokesman of Mahmood Yakubu, a Professor and Chairman , INEC,  dismissed the allegation as untrue. Onyekanmi  may have told those that care to listen that ”if and when the Commission  receives the Tribunal order”, the Commission will comply.

The question on the lips of most people is: who is telling the truth , Atiku or INEC?. Despite Atiku’s intend  in going ahead to inspect the materials used during the conduct of the Presidential and National Assembly election, Robert Clarke, a Senior Advocate of Nigeria, SAN, believes that it would be a wasted effort because the  vote which the APC Candidate garnered in the north cannot be challenged  in Court. He has his reason.

According to him, the APC candidate enjoys  the ”goodwill of the people of the north because of his impressive track records in his first term in office. He noted that in 2003, the Katsina born Nigerian President beat  the President Olusegun Obasanjo of the ruling PDP, in the region. He was said to have repeated the feat in 2007, when he beat late Musa Yar’adua, the PDP Candidate and who incidentally was  also from Katsina state. He repeated it in 2015 and 2019, to beat other Presidential Candidates from other parties, which clearly shows that nobody can contest his votes in the north.

The legal luminary said he would have advised Atiku, the PDP  Candidate to desist from going to the Tribunal or plan to go to Court if he was his lawyer.  Giving his legal background,  an ”aggrieved  loser  at an election  should show  that the election was riddled  with malpractice  before  succeeding at the tribunal”. He maintained that it would not be easy  for Atiku to have his way at the Tribunal or any superior Court   to challenge   an election that  gave the APC Candidate  four million  votes higher than Atiku, his closest rival in the election. Look  at the five states of the north east, he said the totality of all the votes from the region  was not up to two million votes that the PDP Candidate got, not to talk of four million”. This have given Buhari, the confidence to support Atiku to go to Court if aggrieved over his victory in the 2019 Presidential election instead of mobilising party supporters to go to the streets to protest against the election.

Meanwhile, INEC,  has given his words  to continue collation  of the governorship and states Assembly results in the oil rich Rivers state on the ground that it was not declared inconclusive.  It has also given the go ahead for the continuation of collation of results in Bauchi state, in the north east geo-political region. In going ahead with the collation of results in the north eastern state of Bauchi, the Commission was said to have made provision for another Returning officer to take over the position of the former Professor who did the work .

Recall that the state had been penciled down by the Commission as one of the six states  the Supplementary  elections scheduled for Saturday, March 23, 2019 will nold. The others were Adamawa, Sokoto, Plateau, Kano and Benue. Oluwole Osaze-Uzzi, the Commission Director of voters education and Publicity, who spoke on Channels Television recently had said that the former Returning officer in the state could not continue  with the collation of the results  because  of the threats  to her life  and that of her family members by hoodlums. He disclosed that the Commission   will on Tuesday, March 19, 2019, appoint a new Collation officer  who will go back and conclude  the votes of the local government Areas affected in the state.  He explained that  that if there is sufficient  votes  and any of the governorship Candidates in any of the parties certifies  the legal requirement,  he will be declared the winner and certificate of return given to him. As at the time the election was declared inclusive, Bala Mohammed, a former minister of the Federal Capital Territory, FCT, and PDP  governorship Candidate in the state was leading Mohammed Abubakar, the incumbent governor and the APC Candidate   in the polls.

The insinuations in both official and unofficial circles was that the collation of results in the state  may have been technically suspended based on the lead margin principle to manipulate result to favour the APC Candidate who was on the losing side because of poor track records.

Indeed, the INEC Director had said” there may be need for a supplementary election in the state  if it is found out that there are no sufficient votes cast compared to cancelled votes. But Abubakar, the incumbent governor of the state who fears losing the  election to his arch rival, Mohammed of the PDP, had visited Buhari, at the Presidential , to seek his support to head to Court to suspend the collation of result in the disputed Tafawa Balewa Constituency of the state by INEC.

He was said to have been given the express permission to go ahead with his plan to seek redress in Court instead of embarking on illegitimate action. Based on the Presidential approval , the governor was said to have headed to an Abuja High Court where he obtained a Court order which was served the  resident Electoral Commissioner, REC, in the state  restraining it from further collation of result in Tafawa Balewa Constituency.

Ibrahim Abdullahi, the REC, in state who  confirmed that the electoral body already was  in receipt  of the Court order restraining it  from proceeding  with the collation and announcement  of result in respect Tafawa Balewa  Constituency only posits that they would abide by it.

Acting on the Court order, the Commission was said to have suspended the exercise in the Constituency till further notice. The good news was that the collation of result could still go ahead in other Constituencies for the state Assembly election. Abdullahi, the state REC, however, may have given  hope that  the Commission are still making” arrangement  to continue with the state Constituency collation which would facilitate the announcement of the state governorship election result .