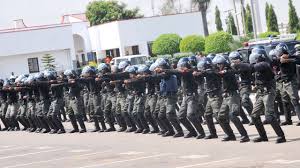 The initial pessimisms  over the Presidential and National Assembly election on Saturday, February 23, 2019, may have died down with the total security provided by Mohammed Abubakar  Adamu , the  acting Inspector General of Police, IGP, in the 36 states of the Federation and the Federal Capital Territory, FCT, Abuja.  .Political thugs who may have wanted to cause trouble or snatch ballot boxes during the election could not have the opportunity to carry out their plan because of the watertight security at the pooling centers.

Political watchers believe that Adamu may have taken advantage of the one week postponement of the general elections by the Independent National Electoral Commission, INEC, to perfect its security arrangement for the election that the electorate could vote without  being intimidated from any quarter.  Nathaniel Nduka, an Aba based trader gave it to Adamu to have adequate security arrangement for the general elections that did give room for rigging.  for Atiku Abubakar, the Presidential Candidate of the People’s Democratic Party , PDP, to have said that if the election did not favour him and as a ”democrat” speaks volume.  President Muhammadu Buhari, who is seeking re-election , on the ticket of  the All Progressive, who voted with Aisha, the First Lady in Daura, his home town, in Katsina state, was said to have made a similar statement to accept the outcome of the result .

As a prelude to the election, was said to have deployed  the Force six Deputy Inspector Generals, DIGs, to the six geo-polical regions: south south East, south-south, south west, north centra, north east and north west including the Federal Capital Territory, FCT.. They were given a mandate to ”ensure adequate  presence, coordination, supervision  and implementation of security strategies for the elections in all polling Units across the country, Registration Area centers,  RACs, Super RACs,  Collation Centers, INEC offices , government  and critical national infrastructure, flash and vulnerable points across the states of the Federation.

The Assistant Inspector Generals and the Commissioners of Police in their respective Zones  and state Commands were also given a matching order to tighten security  in their areas and endeavour to work closely  with the senior officers  deployed to the three Senatorial districts in their  respective states on election duties .

The acting IGP ,may have left no one in doubt that he knows what he is doing  going by his participation in previous elections in the country as he was said to have directed  the Election Intelligence and Monitoring  of security personnel deployed to the states  and FCT to intensify  surveillance , intelligence gathering and monitoring of security personnel deployed nationwide ” for election duties.

He also had had a word of advice Special Election  Investigation Team, SEIT,  to ”ensure concrete investigation electoral offenders”.  Perhaps, to ensure that there is no undue influence of VIP s on voters during  the general elections, Adamu was said to have sounded a note of warning to the CPs, that on ”no account  should  any policeman  or woman  be attached  to VIPs  be seen escorting their  principal to a polling booth  or moving around  with them on the day of the election”. The DIGs, AIGs and CPs may have taken the acting IG order serious that they had in some states. Take the interception of unregistered along Ughelli and loaded with suspected. explosives on Thursday, February 21, 2019, in Delta state by a police team.  Adeyinka Adeleke, the state CP, who could not his joy, because of the damage the explosives could have caused if it had entered the society during the election may have been forced to tightened up security along the busy road. The Nigeria Customs Service, NCS, Federal Operations Unit, FOU Zone A and Zone  C including the Abdullahi Kira, a Deputy Comptroller and Coordinator of the Headquarters’ Strike Force patrol teams on the road were said to have  beefed up security at their checkpoints to ensure proper check on suspected  Commercial and private vehicles passing through the Lagos  -Benin- Patani road to track Concealed weapons, electoral materials  and Contrabands.

Inspite of the tight security  in Rivers state, there was  no voting in Okirika  , home town, of Dame Patience Jonathan, Nigerian’s former First Lady. This is because the electoral materials for the election were said to said to have been hijacked by party thugs, forcing INEC, to suspend voting in  the area.  The  people may have realised there is not room for rigging and thus resorted to use force to snatch the ballot boxes.  There  were also reported cases of snatching   of ballot boxes in Port Harcourt,  result sheets in Ahoada East and Etche ,  The Value News had it on reliable Authority  that electoral materials were aslso snatched by party thugs in  Khana local government.

Many believe that the situation would have been worse in Rivers state both not for the heavy presence of security operatives in the state on the orders of the IGP.  The situation is the same in several other parts of the country but  not as pronounced as it was in the 2015 general elections.

The Army may have listed complaints by politicians that they have no business in the conduct of election as it it was purely a civil matter to have its distance away from it.  Tukur Buratai a Lt .General and Chief of Army  Staff , was said to have created a situation room to be manned by soldiers  in pursuance of its mandate to help create  a secure environment  for the conduct  of the 2019 general elections. The Army  had urged Nigerians to take advantage of the situation room to  ”forward  genuine  information  on security matters as may arise  during the period of the elections.  The people of Borno state appears to have taken the Army situation room  to invite the army over attempts by the BokoHaram Insurgents to disrupt he elections in some areas in the state. The quick intervention of the soldiers may have saved the situation  as the people were made to vote even in the Internally Displaced People, IDP, Camps, were bombs were said to have  been detonated disrupt voting.