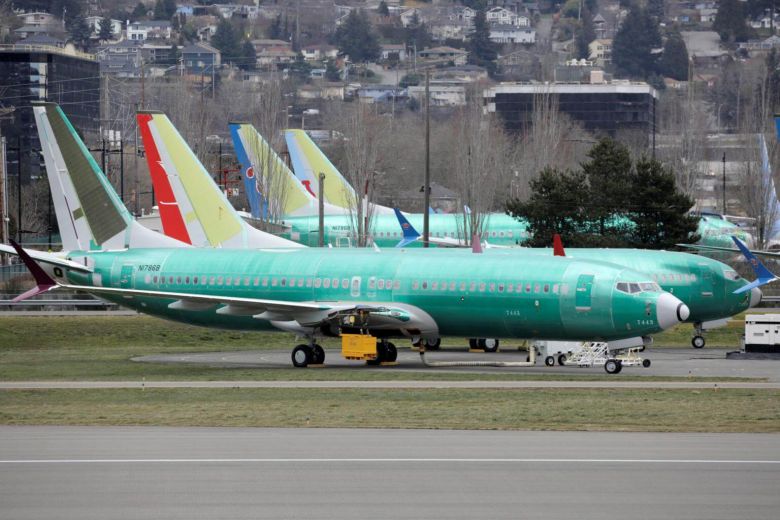 Boeing , a United States, US, based Company and Manufacturers of model aircrafts used by many domestic and International airlines have finally bowed to pressure to ground all Boeing  737 Max 8 . In taking the decision,  the Company noted that after due consultations  with the country’s Federal Aviation Administration, FAA, and the National Transportation Safety Board, NTSB, it had decided to ”ground  the flights out of  an abundance of caution and in order to reassure the flying public  of the aircrafts safety”.

In a Statement issued by the Company, it had recommended to the FAA and the National Transportation Safety Board for the temporary  global suspension  of the entire 737 Max fleet. Dennis Muilenburg, President and Chairman of  Boeing reportedly said that they would do everything within their powers  to” understand the cause of the  Indonesian and Ethiopian airlines accident  in partnership  with the investigators and  deploy  safety enhancements to ensure that this would not happen again”.

Aviation experts said more than 350  Boeing 737 Max jets in global fleets were affected in the decision. It was learnt that 74 are flown  in USA alone. The major users are  United Airlines, American Airlines and Southwest Airlines among others.  It was reported that  shares  in Boeing  ticked higher  to $377 each  following the announcement to ground all the Boeing Max aircrafts . Capital market watchers on the floor of the New York Stock Exchange Market said  the Company  market value also dropped by about $26 billion since the crash  in Ethiopian  on Sunday, March 10, 2019.

Investigation by The Value News shows that over 50 countries  have grounded or banned the Boeing Max jet  inside their airspace.  They are China, India, European Union, Brazil, a South American country, Asian and other  African countries.

Initially, the US and Nigeria , a major aviation transport hub in Africa were hesitant in joining other countries in grounding the Boeing Max jet inside their own countries airspace, insisting that there was ”no cause for alarm”.

But Donald Trump, the US, President ,  on Wednesday, March 13, 2019, announced  that Boeing Max planes 8 and 9 would be grounded across the country.  Trump had justified the action  amid concerns  over two major  crashes between October 2018 and March ,2019. The accidents had occurred in Indonesian and Ethiopian killing all the passengers onboard  the fight totaling about 350.

Note that pilots  in the US, had complained last year  about problems controlling  the Boeing 737 Max jet during take-off. They had expected Boeing to correct the technical problem but that was how far they could go. The  reported difficulties  were said  to  have contributed to the accidents  in Indonesia in October last year and March, 6, this year. For instance, the Ethiopian Airline Boeing Max jet  which crashed after take-off according a  flight radar 24 air traffic monitor  reportedly said that  the plane’s vertical speed was ”unstable after take-off”. New  satellite data, according to an aviation source shows that  that the Ethiopian’s plane’s  movement  was similar  to the Indonesia Lion Air movement that crash last October.

The sudden U-turn  by the American government to ground the 74 Boeing Marx jets fleet in their country came as a surprise to many. This is because Trump, the US President, had never seen anything wrong in the Boeing Max jet but only said that” it was very complex to fly”.  Many believe that the US government coming into agreement with the Being company to ground the Max jets planes till further notice in the country was an indication that something was wrong with it .

Nigeria which had been dilly dallying in taking a decision on the matter could not wait for a better time to do so than now. The government has banned the Boeing Max plane  from the country’s air space. At the instance of President Muhammadu Buhari, Serika Hadi, minister of state, Aviation, explained that regardless  of the enormous safety records  of the Boeing 737 Max jet, it has caused  great concern  in the world Aviation industry. Hadi noted  that in a universal business ”whatever affects  one country affects the other because aircrafts would be flying in and out”.  it was not surprising why the government, according to sources why the government  had issued a directive  that no Airline operator   should have on its fleet the Boeing Max 8 or 9 models in its fleet as they may no longer  be allowed to operate within or outside the country’s airports. This is bad news for Air peace, one of the outstanding private Airlines in the country which had placed order for 10 Max 8 jets , which would take the next four years to be delivered to the company in Nigeria.

Already Boeing had confirmed that” it was  working on a software  fix as well as  updates  to pilot manuals  and training”. The US FAA were said to have promised  to ensure that those changes expected to be made in the Boeing planes were effected before the end of April this year, an indication that it would still be put on Air to fly passengers across continent.

Analysts believe that the earlier Boeing technical personnel sort out the take-off problems identified in  the Max 8 plane, the better, to avoid prolonging the ripple effect on the world economy because of the revenue loss to the government of the respective countries of the world . This in addition to the  a job loss that may be experienced in these countries using the Boeing planes.

Sequel to the grounding of the Boeing Max 8and 9 series, the back box of the crashed Ethiopian Boeing Max 8 plane was said to have arrived France on Thursday, March14, 2019, for proper analysis and evaluation. The device which contain  the flight data and cockpit voice recordings  is expected to shed more light on what brought down the Ethiopian Airline plane. Given the importance attached  to black box by aviation operators, the US NTSB, an Aviation agency in the country , according to sources has sent a three-man member team to help the France investigators download and analyze the data from the black box from the crashed Ethiopian Boeing Commercial flight. The world is waiting for the outcome of the technical team investigation analysis of the black box of the Ethiopian plane crash black  box to know  who is to blame for the crash: Being or the Pilot.