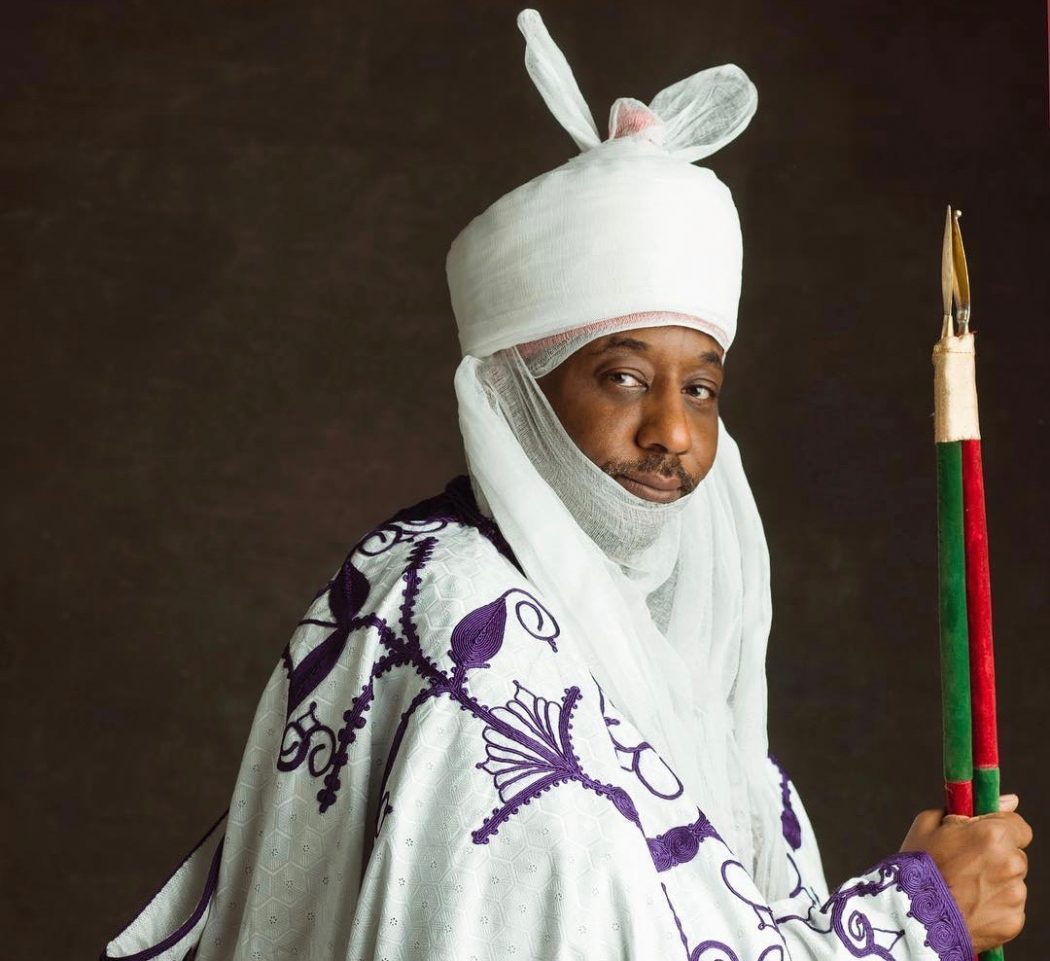 Not many were surprised when Abdullahi Gandunje, the All  Progressive Congress, APC, governor of Kano state Sanusi Lamido Sanusi  II, the former governor of Central  Bank of Nigeria, CBN, and now the Emir of Kano,  met at the Kano Central Mosque on May 4, 2019, and exchanged pleasantries.

Appearing full depicting his office as the Emir of Kano at the Mosque, has no option than to bow before Sanusi  II, while shaking him. The Worshippers watched with disbelief how Ganduje, the state has suddenly developed a dislike for the revered  Emir could before the Emir with total respect.

Political watchers believes that the  governors obeisance to the Emir was  an indication that there must have  been an  external influence  in the governor’s recent  decentralisation of the Kano Emirate into five, including the Kano Emirate controlled by Sanusi  II.

Many of the Worshippers had expected the governor to ignore the embattled Emir, at the Mosque, going by the plot to dethrone him by supporting the state Public Complaints and Anti-Corruption Commission  to robe the spending of the financial allocations to the Council between 2013 and 2017, by the state government.

Note that Gandunje  had accused  Sanusi , of using his powers to  obstruct  the robe, which the Emir did not find funny.  The investigations on the embattled Emir of Kano may have started during the  first term in office of Gandunje as governor of the state going by the statement by the Chairman of the probe Commission. According  to him, ”the Committee  has been investigating  the Emir  over allegations  of what ”concerned friends  of Kano Emirate had ” considered ” unnecessary spending of the Emirates funds to the tune of   over four billion naira”.

Appearing on Channels Television recently, the Kano state Public Complaints and Anti-Corruption Commission,  Chairman, Muhuyi  Magaji, disclosed that  the Commission  received the petition  on allegations of  financial misappropriation  against the Emir from concerned friends of the Emirate on March 28, 2017.

Given an insider information to the contents of the petition, he  said  the petitioners  had accused Sanusi of spending the funds of the Emirate  without ”due regards to due process and the Rule of Law”. The question on the lips of most people is : who are those concerned friends of the Kano Emirate? .

Many believe that the alleged concerned friends of the  Kano Emirate were  Kano state government  officials who were involved in releasing  the financial allocations to the Emirate  and their collaborators in the Emirate  who were  getting worried over the rising influence of the  Monarch in the state.

Magaji,  the Chairman of  the state Public Complaints and Anti-Corruption Commission , had confirmed that the probe of the Emir  started in 2017 through ”inviting  the officers  who were directly  connected with  the maintenance of the treasury of the Emirate for questioning. The  officials, he said , had tendered  elevant documents of the financial records of the Emirate   covering  between 2013 and 2017, showing that the Emir never complied with the due process of spending  the Emirate funds.

The Commission did not only need information from the moles in the Emirate, including the  financial controller, Mahe Bashir  Wali and Sarki Waziri , the Deputy Secretary of the Emirate,  who had  pretended  to be loyal to the Emir, to nail him.

The Commission was also said to have   received reports from the state ministry of  Planning and the Budget office  as well as the Auditor General of the state governments’ office   on the approved  budgets to the Emirate between 2013 and 2017 and its Audited Accounts  within the same period which finally exposed the revered Monarch as a spendthrift.

The findings of the Magaji led Commission speaks volume.   The Commission had reported that   Sanusi II,  who is under probe   had fraudulently spent over N4 billion on projects believed to be questionable.

It was not surprising why the Commission  recommended that  the state government should revoke  the contract  awarded to  Tri-C Nigeria Limited for the renovation of  Babba Daki Kofa Kudu and Gidan Sarki Dorayi, which belong to one  Muniar Sanusi, the Chief of Staff of the Emirate. The Chief  of Staff had been accused of failing to settle the sub-Contractor, Cardinal Architecture Limited after being duly paid by the Emirate Council.

Political watchers believe that there is more to the strained relationship between  Gandunje and Sanusi that informed the plot to remove him as  Emirof Kano. The last general election  may have  perfected the plot of the governor and his clique to remove him.  The governor, according to sources felt that   the Emir’s call for a free and fair election in the state was targeted at him not to be re-elected into office.

Moreso, believes  first class traditional ruler and Chairman of the Council of Chiefs, former governor Rabiu Kwankwaso’s Candidate in election, Abba Kakir He became convinced that the revered Candidate the election was electoral to have been sponsored Emir. The Kano have condemned the earned him the hatred of the governor.

Recall that  the governor had also pointed accusing finger  on the Emir  over the release  of the video clip showing where he was receiving  a kickback from Contractors in the state.  The fallout of the video clip was that  he revoked the contracts   awarded to Tiamin Multi-services Limited, a Company  allegedly belonging  to one Aminu Mohammed . He has  his reason: Mohammed ,was behind the video clips which may have  gotten into the hand of the Emir, believed to be his perceived Enemy.

It is not surprising why the governor happy over the report of the Magaji led  Public Complaints and Anti-Corruption Commission which had recommended the the Emir form office. that the report of the Commission was what the have been waiting for to finally set the stage for the dethronement of  Sanusi  II, the Emir of Kano and also banish As a prelude his he had alleged allegations of about N4 against him by Concerned friends of the Emirate. He was given 24 hours to respond to the query political watchers believe may not have been possible.

The governor had earlier  restricted the Emir’s Sallah activities to the Palace.  The restriction which was a shock to to the Kano Monarch  may have brought to a halt  the 105-old  Hauwa Nassarawa, the Emir’s line of activities that  include  traditional homage to the  governor in Government House, royal sightseeing around the Metrpolis and other important places before returning to the Palace.

Political analysts fear that the former CBN , governor, may not  escape the landmine that had been laid for  him this time by Gandunje who is determined to dethrone him  to prove to him that he is powerless. They averred that the governor’s attitude towards the Averred Emir of Kano was an insult to the traditional institution in African and should be condemned by well meaning Nigerians before  other state governors take cue to dethrone  Monarchs  that are seen  not to be  supporting their  Administration.

Residents of the ancient city  of Kano believe that what Gandunje , has  planned to do the  Emir, was not different from  what  late Sani Abacha, a General and  former Head of State , did to   Ibrahim Dasuki, the Sultan of Sokoto  as he dethronined and banished him in 1996 to Zing in Taraba state, north central Nigeria .

The Sultan had died in exile in 2016, but his corpse was never seen by Sambo Dauki, his son, who incidentally was  a retired Army Colonel and  a former National Security Adviser, NSA, former National Security Adviser, NSA,  to former President Goodluck Jonathan, who has been  in detention since 2015 and now, over alleged Corrupt enrichment, at the instance of president Muhammadu Buhari. It is not surprising why  people  believe that his incase ration was political.