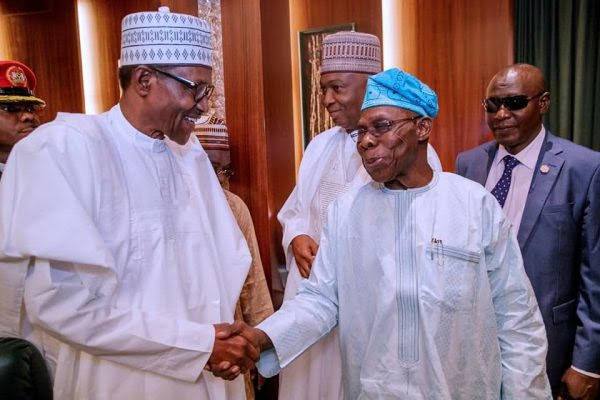 Those who think that Former President Olusegun Obasanjo would not attend the Council of State  meeting  at the Presidential Villa were disappointed. This is because of the recent emotional outburst of the former President against Buhari and Yemi Osinbajo, the Vice President.

Indeed, Obasanjo , had picked on the Katsina born Nigerian President in the last one year describing his government as a failure . Dissecting the Administration,Obasanjo said  Buhari lacks  the capacity  to offer the country what it deserves at this point of the nation political development.

He further Katsina state born Nigerian President of turning the country to General Sani urging Nigerians to elect a president that would serve their purpose in the February  16, 2019 election. The President also took a closer look at the government TraderMoni, championed by Yemi Osinbajo Vice describing it as a fraud.

True to the plan, on  the said date, the Council of State members gathered at the Villa which has  Bukola Saraki , Senate President ,Abdulsallami Abubakar, a former head of state, including former Presidents Olusegun Obasanjo and Goodluck Jonathan in attendance among others.

Buhari, who was beaming with smiles was said to have shook hand with the Council of State members in the Villa including  Obasanjo, his former boss, . Those who watched the scene of the encounter on Channel Television said  Buhari paid much attention to Obasanjo who had released  a bombshell on him last Sunday, forcing the presidency to say Obasanjo needed a medical attention. .

Many had expected the President to lose his temper on citing the Ogun state born former Nigeria  President at the Villa but remain calm. Presiding over the meeting, he was said to have given Obasanjo the opportunity to give the opening prayer of the meeting while  Muhammed Uwais, a former CJN, said the closing prayer. Obasanjo was never short of words for  Buhari said,” he is sick in mind, spirit and soul”.

The President ,according to sources, may have called the all important meeting to seek the advice of the past leaders  on burning national issues such as the national minimum wage, forth coming general election, security and Confirmation of Mohammed Abubakar Adamu, acting Inspector General of Police, IGP. It could not be ascertained whether the President complained about the recent open letter of  former President Obasanjo to him to the Council  for discussion and intervention to force  him to put a stop to his criticisms of the government. It was the third Council of State meeting organised by Buhari since he assumed office in 2015. The Council may have saved the country  from a major crisis as they looked at the state of the economy and found out that it cannot accommodate a N30,000.00 minimum wage. They were said to have approved N27,000.00 minimum wage  for the country.

Following the approval, Buhari is expected to transmit a minimum wage bill to the National Assembly on Wednesday, January 23, 2019, to beat the labour threat of dragging its members on Strike until the government accede to their demand.

Note that prior to the Council of State meeting, Yemi Osinbajo, the Vice President had hit back  at Obasanjo  over his criticism of Trader Moni Scheme to help petty traders.

According to Laolu Akande, the Media Aide to Osinbajo, he goes to the markets to” assess the progress  of the implementation  and to create awareness  for a programme designed to meet the financing  need of N2.2 million  petty traders  across the country in the first instance” and not to distribute N10,000.00 each to traders as  alleged by Obasanjo.

Akande maintained that the TraderMoni Scheme  is being actively implemented across all the states of the Federation including the FCT , noting that it is only Lagos and Abuja as being speculated. He disclosed that the beneficiaries of the TraderMoni Scheme are traders  at the bottom  of the economic ladder with an inventory  often less than N5,000.00, stressing that the Scheme provides  N10,000.00 Collateral/free interest loans to them, an empowerment  that had gone a long way to improve their small businesses.

An aggrieve Osinbajo noted that to describe such a people oriented Scheme as idiotic  is ”not only an absurdity but it is an affront  to the sensibilities  of these hard working Nigerians”. Osibanjo  appears to have sent a signal to Obasanjo that he has gotten a match in him  as his pen would never run dry to respond to his attacks any time. The attack on Obasanjo by the former President may have drawn out close allies of the Vice  President both in the Redeem Christian Church of God, RCCG and political circles to give it back to Obasanjo.

Many believe that the calling of the Council of State by Buhari at this point in time was very timely to douse the tension in the country. They believe that Buhari may have used the opportunity to plead with Obasajo to spare his government. The former President who is used to speaking to Journalists was said to have avoided them after the meeting  despite the ambush laid for him in the Villa.