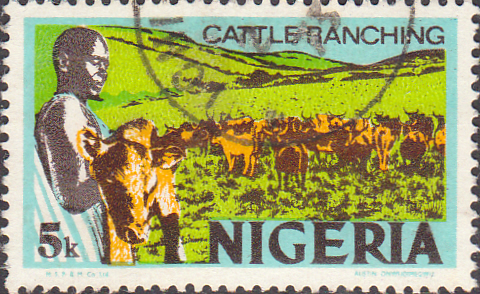 More facts have emerged  how the British government ,laid the foundation for the implementation of the  Ruga settlement which is almost tearing the country apart. Aware that most of the people  from the north, particular, the  fulanis,  major occupation are animal husbandry and the only  way to keep them together to  avoid open grazing  that may cause trouble in the future, the British g had conceived  the Ruga settlement plan  for the country .

It was learnt that then British government  in collaboration with the Nigerian government had begun a gradual  implementation of the  project as the pastoralists  began to  settle in different parts of the country, particular, the north central geo-political region . It was a matter of time for the project to be conceived for nationwide  execution.

It was therefore not very surprising when President Muhammed  Buhari used Audu Ogbe , a former minister of Agriculture and Rural Development and an indigene of Benue state, to test the waters  whether it would accept as  a way of ending  the frequent clashes between herdsmen and farmers in different  parts of the country.

The situation was worse in Benue, Plateau, Nasarawa, Adamawa  and Taraba states , forcing the government  policy makers to go back to the drawing board to implement the long awaited Ruga settlemeent project. The reaction of people and different socio-cultural Organisations in the regions may have sent a signal to President Buhari   and Miyetti Allah, the arrow head of the patoralists, who many believe was spearheading the programme that the coast was not clear for it.

The President  may have read the handwriting on the wall that it may not be an easy project to impose on the states as he tried to wriggle out of the problem by handing it over  Yemi Osinbajo, the Vice President  to  sort out with the governors, promising to abide by their decision.

Osinbajo did not hesitate in doing so as he met with the governors from the six geo-political regions on Tuesday, July 2, 2019, under the auspices of the National Economic Council, NEC, at the Presidential villa , to deliberate on the matter.

The Katsina born Nigerian President may have gotten a signal that the NEC , members are not favourably disposed to the project . He was said to reached out to osme stakeholders to seek their advice on the way forward. Bashir Ahmad, Special Adviser to the President on New Media, tweeted on Tuesday that after” due consultations with stakeholders, the president  suspended the project”, an indication that it may still come up on a later date.

Indigenes  of Benue state particular ,the farmers,, who had been bearing the heat of the herdsmen attacks over the years were said to jumped into celebration when information filtered out that  the Presidency has suspended the Ruga project.  Samuel Ortom, the state governor may  have spoken the mind of the people when he said on Wednesday, July 3, 2019, that the suspension  was a fallout of a ”struggle by the people of the country  against impunity and injustice”. He urged the President and officials  of the ministry of Agriculture and Rural Development  to use the opportunity provided by the suspension of the project  to” encourage pastoralists and livestock owners to embrace ranching  as the  model of animal husbandry” .

Note that Ortom, the Benue governor, the Ohanaeze Ndigbo, Afenifere, the Middle Belt  Forum  and other socio cultural groups  across the country  had clashed  with the Presidency on Tuesday, July 2, 2019, over the project. Wole Soyinka, the Nobel Laureate,may have been  forced to advice the government to have a have a rethink  over the  the Ruga settlement project when he saw the direction things were going   which may explode at any moment.  It, he had said could ”spark  an explosion ” noting th that the ” project  was not the best  approach  to solving  the herders and farmers frequent clashes”.

Dave Umahi, governor of Eboyi state, may have given an insight into why the project was suspended by the presidency  attributing it to the National  Livestock Transformation plan , NLTP’ policy’. According to him, ” it is inconsistent with  the NLTP,  policy, which was  approved by NEC and the  FG, which had made it   a voluntary  programme to all the 36 states  of the Federation  which wish  to participate.  GThe governor  disclosed that it was not a compulsory programme   but optional  for any state that is willing  to key into it.

Political watchers believe that the  Presidency may have known that it has lost the battle to force Nigerians to accept the RUGA project  as it came out  with clarifications  last Sunday    that the Ruga settlement  only  seek to settle  animal farmers, not just cattle herders in an organised place  with provision  of necessary  and adequate basic   amenities such as schools,hospitals, road networks, clinics, markets and manufacturing entities that will process and add value to the  meats and animal products  The Presidency may have come up with these enticing projects to be established at the Ruga settlement areas to  force the states to  accept it to benefit from the basic infrastructural facilities  at the various locations.

Note that the government  had allocated  the sum of  N26 billion in this year’s budgetary provision  for the development of the national grazing reserves which budget  was signed into law by the President on May 28, 2019. The allocation  was said to have been built into to the budget of the  ministry of Agriculture and Rural Development.

Between last year and now, there had been rmour making the rounds that  the ministry had awarded  contracst  in the pilot phase of the programme   for the construction of ruga infrastructure  complete with sanitary facilities in Taraba, Benue, Adamawa, Plateau, Zamfara, Kano, Kaduna , Kogi , Sokoto, Katsina, Kebbi and Niger.

Recall that officials of the Federal ministry of Agriculture and Rural Development who are acting  out a script of the Presidency  and Miyeti Allah,   has made it clear  that it is going ahead  with the execution of the project  to those that cares to listen  , notwithstanding the opposition , particular, from the southern part of the country.

One of the contracts for the construction  of the basic Ruga infrastructure and sanitary facilities in eight locations was said to have been in Taraba state alone, to an Abuja based Company , MAS  Prudent ltd.  The Company , according to sources had already gotten the letter of award,  reference number FMA/ROC/RD/SIP/5499/1,  dated  May 21, 2019. The contract sum  of over N166 million, the Magazine was informed was  inclusive of VAT, going by the letter of award  an indication that the programme has gotten off the ground.  The Company and others which got a similar contract in other states  have four weeks each  with effect from the date receiving  the letter of award to complete the project in the  states contracted to  them.`

Many believe that the  presidency may have bowed to pressure to suspend the Ruga project but would never forgive Ortom, the governor of  Benue state dragging the along with him to pose a a strong resistance against it. against it.

Garba Shehu, senior Special Assistant  to the President  on Media and Publicity may have spoken the mind of the President when he said he could not understand why Ortom, t  should be the one  leading the opposition against the project when he has declared that his  state will not participate in it. He has his reason to worry. This is because of the amount of money that had been spent on the project so far in engaging services of  Consultants and the budgetary allocations for the projects  this year which may be diverted  to other unplanned  projects in the country.

He had described  the Benue governor  as  using  the Ruga settlement project  to” divert attention from his failure”.  He may have had at the back of the  his mind that but for the sensitisation campaign mounted by the Benue  governor against the project , it would have been accepted by the states without any grudge.

the Presidential media aide  disclosed that” 13 states  are already in the process of  implementation of the plan to transform the livestock production  system in the country along market oriented values  while ensuring atmospheric space and justice” in the country irrespective of the public outcry.

In spite of the bold face put up by the Media aide, analysts see the suspension of the Ruga project as a welcome development that should be supported by all well meaning Nigerians  for peace to reign.