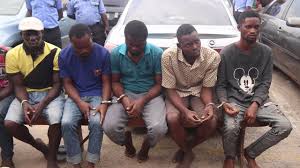 This is not the best of times for  Cultists, gangsters, Kidnappers and Armed Robbers  who have made Lagos  their  operational  base to carry out their nefarious activities in recent times. This is because Zubairu  Mu’azu, the state Commissioner of Police , and his tactical  Operations Team appear prepared to go to any length to smoke them  out from their hideout .

On assumption of duties in Lagos state, he was said to have visited the Oworoshoki Shanties  which had been dreaded by former Police Commissioners in the state because of the notoriety of people of the area, regarded as a breeding  ground for criminals and cultists in the state. His findings  in the area may have strengthened his resolve  to tackle the menace  of ”kidnapping, armed robbery, cultism and gangsterism” , particular traffic robbery, in the state.

A s a prelude to ensuring  that the Command’s efforts in combating violent crimes in the state are not sabotaged,  Mua’azu , the  Police Commissioner,  dedicated a number, 09090003792 for those who have complaints of  unwholesome activities of police personnel  to easily  reach out to the Command. Appealing to the people to support the police so that their efforts at  combating crimes in the state would not be in vain, he averred that  it is the only way the security operatives would serve the state better.

The no nonsense CP who could be regarded as a child of circumstances having assumed duty in Lagos to be confronted by  extrajudicial killings by officers of Lagos State Police Command, was said to have also equipped the  Command Rapid Response Squad, RRS, with  the state of the Art  modern working tools  to assist them in responding to distress calls and emergency situations in any part of the state without delay to achieve result.

”My dream is to present to Lagosians a state  where everyone is safe  to carry out his or her legitimate duties at all time without harassment or intimidation by anyone”, he had said.   In the light of this objective, he was said to have embarked ”  on the re-training of officers in the state  as a way of turning them  to true Professionals , Courageous and peoples friendly police officers”.

The Value News learnt that the Commissioner has also entered into talks  with some Consulting firms to Organise  training programmes  for the officers on ”Emotional Intelligence” to restore their confidence in combating crime in the state.  The efforts seems to  have paid off. This is evident  by the recent  rescue of the abducted  Rasaki Musibau, Director , of the Lagos state Fire Service and six others. The police effort was capped with  the arrest of two suspects in connection  with the kidnap case. The Commissioner disclosed  that ”sustained  and well-Coordinated  operations by the Command’s Anti-Kidnapping   Unit led to the arrest of the two suspects ”.

The suspects,  one  Blessing Bayo, a 29 year -old and  his partner in crime , one 32 year -year old Smart Alfred , who were  arrested last week Wednesday  at Ibafun, along the  Ikorodu – Ijebu Ode Expressway were said to have been detained in a secluded facility outside the Command normal detention room to avoid mingling with other hardened criminals who are still in the police detention  pending when they would be charged to Court. The good news was that the duo had confessed  to ”committing the crime ”.  Bayo, one  of the  Arogbo, Ondo state born  suspects  disclosed that they did not collect any ransom from the family of the victims as they  were still negotiating before they fell into the waiting hands of Mu’azu’s men on the road. The suspect who looked unruffled  never showed any sign of regret  as he sat on the ground   at the police expansive premises , guarded by heavily armed  Special Anti Robbery Squad, SARS, personnel.

The most recent case handled by the Command  was said to have been based on a Complaint letter,  given by  one Adeniyi  Adegeye,  popularly known as, King Sunny Ade, that  some   unknown persons  opened  a fake Instagram Account  and Bank  Accounts in his name  ostensibly to defraud unsuspecting members of the public.

Acting on the report,  Mu’azu, was said to have  deployed  members of the Command  Criminal Intelligence  Bureau, CIB, who were said to have  carried  out a thorough  and painstaking Investigation on the matter leading to the arrest of four suspects. They are Ayoola Zainab,  Oyewunmi Abiodun Ridwan, Oyedokun Lawrence Femi and Oyebode Rebeca.  The police Investigators were said to have recovered  an ATM card of the account from the gang which they had successfully used in defrauding 28 victims of N1.387,000.00 . Rebecca, one of the female suspects was said to have owned an  account which she used in defrauding  33 victims of N1,454,200.00

Femi, who is the leader of the syndicate, who opened the fake  Instagram and email accounts, which were the platforms   he was said to have  placed the information about  a ”non existing  King Sunny Ade  United States  , US, musical tour was said to have  duped  33 people of the sum  N2,841,200.00. The import of this according to the Lagos CP  is a warning to Nigerians to be careful who they chart up  in the social media as most of the names are non existing  merely used to trap and dupe victims. The suspects, the police boss confirmed have been charged to Court as a lesson to others who engage in such fraudulent activities.

What may have gladenned the heart of the Police Commissioner in the state was a notorious armed robber and Cult leader  who has been terrorising  people. The suspect , One Kehinde Olamide, popularly known in criminal circles as Obeke, according to sources has been on the wanted list of the  police for years. He was said to have masterminded  the attack on Yoruba  leaders  in Afolabi Ege  market.

Given his privileged  information, the Lagos state Police Commissioner disclosed  that  the gang  , ” operate mostly  along  Pako Bust stop and Mile Ten area of Ojo”, where there is an existing military Barrack, Ojo Cantonment.

More worrisome about the crime in the society  was the arrest of one Emmanuel Ede, 22 years,  and an  indigene of  Enugu state and four others  who disguise themselves   as vehicle loaders along the road at Mazaza  but were actually  Indian Hemp  sellers for the dealer in the area.  Ede, who claimed to have entered Lagos  had ended up at the motor park where he mixed up with  area boys  in the  area who  introduced him to the business as a means o f survival. The suspect who told The Value News that he has been in the business for the past two years while narrating his ordeal said ”I sleep and wake up in the morning at the Maza Maza motor park. The police patrol team who raided were said to have caught them with the exhibits which were displayed at the state Police Command  where the criminals were brought out for parade to the public.

The   Lagos state police Command tactical units on the orders of the Commissioner  may have beamed their  searchlight at Mazamaza  and Ojo axis of the state  to stop the crime wave in the area.

However what baffles many onlookers is why the activities of these criminals thrive in an area like Ojo which not only has a large military base but a Department of State Security, DSS facility, the training base and shooting range.