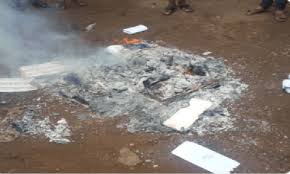 In spite of the adequate security arrangement made Ibrahim Abubakar Adamu, acting Inspector General of Police , IGP, for the smooth conduct of the Supplementary election in seventeen states of the Federation including Abuja, the Federal Capital Territory, on Saturday, March 23, 2019, party thugs and hoodlums still have their way to cause mayhem  during the election in Benue and Kano states.

Note that Adamu, the IGP, had deployed more officers and  trigger hungry junior officers  to Benue and Sokoto , regarded as flash point states . Security sources disclosed that fifteen Commissioners of police were deployed to the state.  It was learnt that three additional CPs each were deployed to Benue and Sokoto states each and two each to  Adamawa, Bauchi, Kano and Plateau states to compliment the effort of the substantive CPs in the states. It was gathered that only one additional CP was sent to Imo state.

The Deputy Inspector General was deployed to oversee the elections include  Usman Abubakar- Adamawa, Yakubu Jibrin- Benue,  Taiwo Lakanu- Plateau. Anthony Michael- Kano and Godwin Nwobodo- Bauch state. Adamu was optimistic that with the high ranking officers on in the flashpoint there would never be any problem.  He has a  word of caution for the officers deployed on the election remain ” , apolitical; steadfast,  professional, and civil in their relationship with the politicians”  during the conduct of the elections. That was how far he could go.

In Benue state where the rerun is between Samuel Ortom, the governor of the state, who is seeking re-election on the platform of the Peoples Democratic party, PDP, and Emmanuel  Jime, his counterpart in the All Progressive Congress. APC,   suspected thugs  were said to have  snatched electoral materials and attacked party agents accompanying the electoral materials  The policemen were said to have watched effortless without doing anything  to save the situation, fueling speculation that this may have been planned as part of the efforts to f\frustrate  Ortom from winning the election in the state.

.  Nentawe Yilwatda, the Resident Electoral Commission, REC, in the state  who confirmed the attack  said the hoodlums  laid ambush on the INEC officials   heading to Chito Adzendechi Council Ward , Headquarters of  of Ukum local government Area , where the Supplementary election was supposed to home.  The Ward , according to source has high voting strength and regarded as  stronghold of PDP in the local government. The policemen on ground were said to have watched as the hoodlums   burnt the electoral materials in the process. Given the action of the hoodlums, Yilwatda, the RC, in the state explained that  over 13,000 voters in the Ward were cancelled.

The situation was the same in Kano, where the battle was slugged out by Abdullahi Ganduje, the incumbent governor of the state who is seeking re- the platform of APC and Abba Yusuf of the PDP are slugging it out.  Party thugs were said to have electoral in a stronghold at  Gama town. They were said to have attacked six polling units in Nasarawa local government Area of the state. Residents a target of hoodlums since when the ban on politics was lifted and the conduct of election 1999 because of the of voters in the area and their support for the PDP. The suspected party thugs were have snatched ballot the disrupted the electoral process in the area, calling to question the deployment of security operatives to oversee the supplementary election in the state. Eyewitness account said the carnage was much, an indication Mahmood Yakubu, a Professor and Chairman, INEC, and his National Commissioners and the affected states where the Supplementary were held were not ready. In apparent reaction to the attacks on party Agents and PDP the state,  Kola the Party the attack was by the hoodlums with the active connivance of security operatives. He lamented that the security operatives deployed to Kano state were ” agents”.  the fear in political circles is that the election may still be declared inconclusive with the disruption of the election in some of the were held in the affected states because of the number of votes.