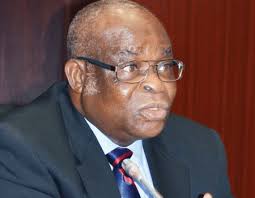 Onnoghen, the CJN, who is facing trial over  alleged  non declaration of Assets and Operation of seven different bank Accounts  including domiciliary Accounts with millions of naira and thousands of dollars, Pounds and Euros, cash balance appears to be facing more hurdles which makes his case worse.

He may have played  into Buhari’s hand because of the number of high profile cases bordering on Corruption, which the government had lost, since  he became the CJN, between 2017 and now. Buhari, according to sources, did not find it funny and thus may have started shopping for another CJN, to replace him ahead of the 2019 general elections.

Indeed, the unfreezing of the $5.3 billion dollar Account belonging to Patience Jonathan, a former First Lady  and the  trial and acquittal of Godsday Orubebe, former minister of Niger Delta over alleged  contract scam of N 1.97 billion and Patrick Apobolokemi, former Director General, Nigerian Maritime Administration and Safety Agency, NIMASA, who was said to have diverted N2.6 billion  from the Agency’s Account  between November 2013 and May, 2015 may not have helped his case.

Buhari may have also been convinced that Onnoghen, the Cross river state born CJN, may not work with his government with the Court Acquittal of Mike Ozekhomme, a Senior Advocate of Nigeria, SAN, in a case brought against him by the EFCC and Bukola Saraki,a former governor of Kwara state and Senate President over alleged false declaration of Assets. He may have  had the believe that the Supreme Court would uphold the Court of Appeal Judgement freezing Mrs. Jonathan’s dollar bank Account  and convicting Orubebe, Apobolokemi, Ozekhome  and Saraki. He may have wanted to use the conviction by the CCB to mobilise the APC Senators to remove him as Senate President but lost out.

His reaction  to the acquittal of Saraki, the Senate President by the Supreme Court in the case in the case instituted against him by the CCB,  may have exposed the anger of the President against Onnoghen for presiding over the Supreme Court  that acquitted  him .  ”The country’s judicial system, ”no matter the challenges it faces, is truly working, and no one should be allowed to undermine or break it”, Buhari, had said in a’ mockery’ Statement released by Garba Shehu, Senior Special Assistant , Media and Publicity.

He had further said,  ” I have seen Saraki take the tortuous path  of using the judicial process. He persevered, and in the end, the highest Court of the land, the Supreme Court, says he is not guilty as charged” by the CCB. He stopped short at telling the CJN, your  days are numbered in the Supreme Court.

The acquittal of the Senate President, may have given Buhari and his security agencies time to plot for Onnoghen’s fall from the Olympia height.  They got him  over non declaration of his Assets and operating domiciliary bank Accounts . He may have given the President   and his antigraft agencies the ammunition to trail him and ensure he resigns when he admitted before his CCB , interrogators that he made a mistake for not declaring his Assets when he ought to have done it in 2005 and 2009.

Timi Frank, a former Deputy National Publicity Secretary  of APC, tink differently. He  said the arraignment of the CJN in the CCB  Court was part of the grand  plot to remove him from office and appoint a new CJN, who would” help legitimise Buhari’s second term  at the Supreme Court”  if he fails to win on the first ballot.

But  Yemi Osinbajo, the Vice President, who was said to have  nominated Onnoghen for the position of CJN, in 2016, may have exonerated the President from any blame  in the CJN case with CCB.”The President did not know about any financial misdemeanor against the CJN, until Saturday, January 12, 2019, evening”, he had said.

Osinbajo  , however,may have shot himself on the leg  when he confirmed that Buhari had ”issued specific  instructions  that anti-graft Institutions  should be allowed  to do their jobs without any interference”. The Vice President disclosed  that, his ”whole approach  is that Institutions  just to  do their work”. He was said to have opened up at the Online Publishers Conference in Abuja.

Given Buhari’s mind set, according to sources, he would have preferred the EFCC, to take over the investigation of  the allegation of the sources of funds of the seven different bank Accounts of the CJN including the dormiciliary Accounts in Standard Chartered Bank, Wuse, Zone,2,Branch, Abuja.

The sources of  funds, of the local Accounts which has millions of Naira cash balance as at November 14, 2016, and the domiciliary Accounts which have thousands of pounds, dollars and Euro cash balance, as at November 14, 2014,  according to the embattled  CJN were proceeds from his ”salaries, allowances and estacodes.  But Buhari may not have believed him.

Given the information available to him, he believes Onnoghen has been Compromised in the discharge of his duties and therefore should be made to face the law without minding his position in government as a deterrence to others that the Law is no respecter of persons.

There are indications he had wanted the Ibrahim Magu led EFCC, to take over the investigation of the bank Accounts belonging to the CJN,  but the criticism it may attract may have forced him to change his mind and to give the responsibility to the Nigerian Intelligence Financial Unit, NFIU, to handle.  The reaction of Nigerians when information filtered out that the CJN’s official residences was raided by the anti-graft agency clearly shows  what would happened if the President had given the assignment to the agency. The Anti-graft agency, who believes that the source of the news was Fani Kayode, a Chieftain of the People’s Democratic Party, PDP, and former minister of Aviation, under former President Obasanjo,  and Yinka Odumakin, Spokesman of Afenifere, was forced to deny it  with a threat to drag the duo to Court.

Acting on the Executive Order  No.6. which was enacted on July 5, 2018,  Malami, the Attorney General and minister f Justice was said to have given a nod to  NFIU to freeze the CJN  bank accounts . The letter giving the approval to  theNFIU,  to freeze his Accounts   was said to have been signed by  one Abiodun  Aikomo.

The essence of restricting  the embattled CJN from normal banking operations, according to political watchers , was basically to clip his wings and force him to resign.The Presidency may have known that he will not resign going by his statement: I have done  no wrong”.   Osinbajo, the vice president may not have unbarred his mind over the trial of the CJN, but it is obvious , he was not happy going by his comments. He has every reason to be unhappy because he had nominated him in 2016 as the acting CJN, before his  Confirmation in 2017.

Onnoghen’s  trial by CCB may have  sharply divided the country .  But many still believe that there is need for Nigeria to take a cue from, where the  Gopal Parajuli, the Chief Justice  was said to have been fired  by the country’s Juducial Council ,over alleged accusation of  faking his date of birth in order  to stay in office  past the mandary retirement age of 60.

In the case of Onnoghen, the CJN, he has been accused by Aghaya, regarded in political circles  as government of crony of non declaration of Assets and operation  domiciliary Accounts against Civil Service regulation. The international Community are waiting to see what the Buhari government will do to Onnoghen, the CJN, : Fire him as Nepal did to their Chief Justice.

While the CJN troubles continue to dominate the talks in the country, Atiku Abubakar, the Presidential Candidate of the PDP, who the government had repeatedly said cannot travel to the United states over his alleged involvement in Halliburton scandal  in which Dick Cheney, a former US Vice President was imprisoned  travelled to President Donald Trump own country on Thursday.

Against all expectations, he is expected  to engage  in bilateral meetings with high powered  bipartisan  delegation of US Congressmen , who were said to be deeply concerned about the future of democracy in Nigeria. Atiku is also expected to hold talks with top US government official  and Nigerians in the Diaspora before returning to Nigeria to continue his Campaigns.

There is no gain saying the fact that Buhari, the APC, Presidential Candidate, may have lost many followers because of the poor handling of Onnoghen, the  CJN’s trial. The trial, which had united Nigerians from all works of life may have swollen the rank of Atiku, the PDP, Presidential Candidate supporters, an indication that he may get sympathy votes to beat Buhari, the APC Candidate in the election.