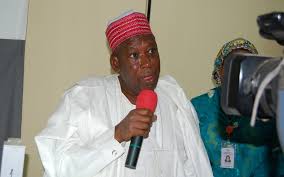 Not many people were surprised that Abdullahi Gandunje, incumbent governor of Kano state and a former political ally of Rabiu Kwankwaso, who incidentally was a former governor of the state and Senator of Federal Republic of Nigeria was  declared winner of the Governorship supplementary election held last Saturday by Bello Shehu, the Returning officer of the Independent National Electoral Commission, INEC.

Signs that the All Progressive Congress, APC, had perfected plans to win the biggest North Western state of Kano, emerged  last February when alleged 17 sacks of thumb printed  ballot papers  for the postponed  February 16, 2019, Presidential election , was nabbed  by the police in the state.

Many had expected Ibrahim Abubakar Adamu acting Inspector General of Police, IGP, and Heads of other security Agencies including Mahmood Yakubu, the INEC , boss , to mobilise their officers to beam their searchlight on the state. But the matter was glossed over by the security as Ganduje, the incumbent governor and APC Candidate repeatedly boasted that he will deliver the state to President Muhammadu Buhari, the APC , Candidate , in the February 23, 2019, Presidential and National Assembly election and still go ahead to win the governorship election  of the state.

Political watchers in the state saw it as an empty talk because of the baggage he was carrying which bothers on alleged Corrupt enrichment  but Gandunje , the man at the centre of the controversy, knew that he is a Candidate to beat in the state governorship election.

As a prelude to winning the election, INEC had declared the election inconclusive on the premise that the lead votes was lower than the cancelled votes and a supplementary election ordered in the state on Saturday, March 23, 2019, along -side five other states-Adamawa, Plateau, Benue, Bauchi, and Sokoto. The results of Sokoto, Bauchi and Benue states were not delayed but quickly declared after the Supplementary election but that of Adamawa, home state of Atiku  Abubakar, Presidential Candidate of the PDP and Kano were kept in abeyance, fueling speculation that it may be manipulated to favour the APC.

Note that the on the day of election,  suspected hoodlums and party thugs, allegedly linked to the APC, were said  to have shave invaded six polling booths in Gama Council Ward, Nasarawa local government Area of the state, regarded as a PDP stronghold , with a high voting strength. The hoodlums were said to have snatched ballots  boxes and unleashed mayhem on party Agents and supporters of the opposition party candidate Abba Yusuf with  many of the injured ending up in the Hospital for treatment.

Atiku , the  Presidential Candidate of  the PDP, who is not happy at the violence that characterised the supplementary election in parts of the country had tweeted : We would have expected  better  management  of the polls  on account of much reduced  coverage areas. He stopped short of calling INEC , a failed Agency.

INEC , may have tinkered with the option of cancelling the votes from the Gama area  which would have further prolonged the election in the area but were said to have been cautioned against it by the Civil Society Situation room Observers who disclosed that the election has been concluded and votes counted before the hoodlums attacked.

Political Observers believe that APC officials in the state may have used the one week postponement of  the governorship election in the state to perfect plans to win the election.  It may have worked out as the governor, who was trailing behind, Abba Yusuf, the PDP, Candidate, with a deficit of over26,000 votes, when elections  at more than 200 polling centres were cancelled came from nowhere to top the table  and proceed to beat Yusuf, his closest rival and the PDP Candidate in the election with over 36,000 votes.

Senator Shehu Sani, a Senator of Federal Republic of Nigeria, whose re-election bid was scuttled by El-Rufai, the APC , governor of Kaduna state, said  the silence of President Muhammadu Buhari and the party leadership   on the issue of violence which marred the Kano supplementary election last Saturday  was an indication  that they supported what happened in the state. He tweeted, ”not to condemn  the violence in Kano  is to condone  or to concur”.

In declaring Gandunje, the APC Candidate, the winner of the election, on Sunday, March24, 2019,  Shehu, the Returning officer , said the APC Candidate polled  a total of 1,033,695 votes as against his closest rival, Yusuf, the PDP,  governorship Candidate  who scored  1, 024,713 votes after their Supplementary election votes  were added to the March 9 election., translating to a difference of about 9000 votes.

An elated Ganduje, the APC, Cadidate, has asked those aggrieved over his victory in the election   to ”accept the outcome of the exercise  in good faith” instead of crying wolf. Appealing to party supporters who are jubilating over his defeat of Kwakwanso, the alleged godfather of PDP in the state  and his godson, Yusuf, the party governorship Candidate, to avoid intimidation  of party opponents, he described his victory as ”democracy in action”.

Perhaps to win the heart of the people, he has promised to use the next four years of his Administration  to ”consolidate  on the programmes  already being implemented in his first term. Residents said that prior to the Supplementary election, in the state the governor used the  one week extension to sink boreholes and started road construction in most of the Council Areas where supplementary election were billed to take place to win back the heart of the people which may have served the purpose.

Yusuf, the PDP, Candidate is not ready to concede victory to Ganduje of the APC, insisting that he won the election. Reacting to the Supplementary election in the state , the PDP described it as a ”National disgrace  and a mere figure allocating exercise  by compromised INEC officials  who had collaborated  with power drunk politicians  in APC to award results to the APC Candidate.

Kola Ologbondiya, the party Spokesperson, said there was no basis for the Supplementary election in the state,  as its  Candidate, Yusuf  had already won the election since March 9, 2019, having fulfilled the ”Constitutional requirement of  securing  the highest number  of votes  and the statutory  25 percent in two-third local government Areas of the state”.

Critics averred that the PDP may have shot itself on the leg when it described the ”Supplementary poll as a National disgrace and mere allocation of figures to APC Candidates as the same election has produced Bala Mohammed, Samuel Ortom and Aminu Tambuwal, s who contested the election on the platform of PDP  as governors of Bauchi, Benue and Sokoto states  respectively. They argued that that if the party was right in its claim, as they have made the public to believe, the APC  would have cleared  the six states where INEC , had organised the Supplementary election. The party appear set to head to the Election Petition Tribunal in readiness to head to Court to challenge Gandunje and APC  victory in the governorship election of the state.

However, the outcome of the election has elicited droves of reactions from the PDP, election observers, journalists, political analysts and onlookers all who painted the supplementary election in the state as a show of shame.

Accounts of journalists and election observers gave accounts of how political thugs suspected to be working for the APC invaded many polling stations beating up party agents and electorates and carted away ballot boxes. Infact a journalist even revealed how the thugs and the security agents chased them away from some polling booths which later return 100 percent votes to the APC. Also reported is how an AIT Camera man who filmed the rigging of election in a particular voting point had his camera seized by the police who ordered him to delete the film.

What also surprised many people is the role of the police in the supplementary election. They wonder how come a place that one DIG and two AIGS of police were sent to Kano to complement the state Commissioner of Police to monitor the election could not check the large scale violence carried out by the political thugs that were beamed and send to many dumb founded Nigerians. This non-challant attitude of the police fuelled the suspicion that the police were compromised to work for the ruling party in the state.

Notwithstanding the victory of Governor Ganduje, the PDP are ready and optimistic that like Osun state, the party Candidate will reclaim his mandate at the court..