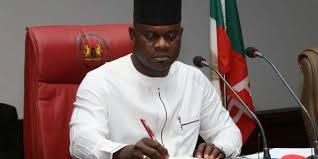 Not many people  were surprised at the frosty relationship  between  Yahaya Bello, governor of Kogi state , on the platform of the Al Progressive Congress, APC,  and  Simon Achuba, , regarded as the most powerless deputy governor the country has ever produced   over the last  three and half years.  The disagreement between the duo became noticeable baerly one year after  the latter’s assumption of office in 2016.

The over  three-year- old conflict between the two political gladiators in the state appear to have taken a new dimension as the governor  was said to have  mobilised the  leadership of the state House of Assembly to commence an impeachment proceedings  against  Achuba , the deputy governor,   without  further delay in order.

Party sources believe that   the continuous presence of the deputy governor in APC  circles would  rob the party  of the chances of winning the November 16, 2019, governorship election  in the state.  There are indications that the  state Lawmakers may have  concluded arrangement  to commence the impeachment proceedings  against  the Kogi deputy governor going by feelers from the House.

They had accused the  deputy governor  of plotting to dump the party  at the last minute to work for the People’s Democratic  Party, PDP, governorship Candidate in the state. The alleged visit to Bukola Saraki, a former Senate President and Coordinator, of Atiku Abubakar, the PDP, Presidential  Candidate in the last general election may not have helped his case.  This is because  Bello and his cohorts saw it as an opportunity to work against him and to ensure that he is in the bad bok of the Presidency and the party National Working Committee Executive  Headed by Adms Oshiomhole, a former governor of Edo state.

The Value News findings shows that the disagreement between  the two  major  political gladiators in the state  have heated up the polity  . This is because  wherever  two or three people are gathered in the state, particular, Lokoja, the Capital, the crisis of Confidence between  Bello , and Achuba, the deputy governor and the planned impeachment of the later , on the orders of the governor by the state House of Assembly dominated their talks.

The embattled  deputy  governor believes  that  the resort To plan B by the governor to  force the state House of Assembly  to initiate  impeachment moves against  him was not unexpected   because of the frequent meetings  between him and  the principal officers of the House at the  Government House to fine-tune the arrangement.

Note that he had  turned the heart  of  President, and Oshiomhole, the National Chairman of the party against Achuba,  that his Complaints to the President and the Party leader about the treatment  he was  getting from Bello  was brushed aside.  This is evident going by their lackadaisical attitude towards the conflict between the duo over the last  three  and half years. It  was  not surprising why the duo were not ready to call the governor to order to change his style of leadership  in order to  carry Achuba , his deputy governor, along in the   running of the Affairs of the state.

The recent  purchase of  the party nomination  and expression of interest  forms   with N22.5 million ahead of the state governorship election speaks volume.  The question on the lips of most people was: where did he raise the money?.

Going by the Revenue Mobilisation and Fiscal Commission, RMFC, records,  a governor’s monthly  basic  salary is  N185, 308.75 and a stewardship allowance of   N92, 654.37. This is in addition to a monthly  Constituency allowance of   N370,617.50, thus bringing  the  monthly total package of a governor to  N648,580.62 or N7.7 million per annum. This is a  clear  indication that  the total salary package  and allowances of the governor in the last   three years of N23.3 million could not have foot the  bill and other extra expenses.  He may  have dropped  Achuba, his estranged deputy,  for a new deputy  governorship  Candidate, described in party circles  as the’’ unofficial deputy governor of the state’’, from Igala land.

Recall, that Bello never  wanted to work with Achuba, regardeded as  an over ambitious Igala born politician   by his  loyalists  but had reluctantly bowed to pressure  from the party leadership who   imposed  him.   James Faleke, who ought to have  replaced  the late  Abubakar Audu, who contest  the , governorship election in the state was denied the opportunity and asked  to still play  the second –in Command to bello, the new anointed  Candidate by the party but he he turned it down .

Note that Achuba , who may have bowed to pressure from the state power brokers and individuals from  several other quarters including prominent Monarchs ,   to dump the  PDP, and join the APC had done so barely four months after the 2016 governorship election had been contested and won by Bello, the APC flg bearer.

It  was not surprising why he was Compensated with the  position of the deputy governor of the state which was  reserved for the  Igala ethnic  group, in the spirit of party  Zoning of political offices  in the state.   The fallout was that  Bello, who was selected by the party leadership to replace the Late Audu,  and his cohorts, from the onset of the Administration  in 2016 saw  him  as a stranger  and had done  everything within their powers to frustrate him to him to  resign voluntarily .

Giving  an insider information   about the genesis  of the disagreement between  him and Bello, he disclosed that his problems started ‘’ when  he  gave   his advice to the governor  as a second  in-  Command  on some of the burning issues   that had reared up its ugly head   in the running of the affairs of the state  including the Administration’s Obligation to workers’’.

According to him, the  governor  rather than focusing  on delivering the dividends of democracy to the people of the state,, he chose to vent his  frustration  on his perceived enemies, including him.  An aggrieved  Achuba , who could not hide his feelings   said  Bello and his cohorts  believes he has  ulterior motive to take over from him as the next governor of the state as they  started   working  against him and kept him at a distance.

Note that the  governor  had  stooped the payment of the deputy governors   salaries and allowances. On ground that he was not working. An aggrieved Kogi East Senatorial district politician  confirmed  that for the past two years Bello, the  governor had stopped payment  of  his salaries and allowances. The governor was said to have also stopped giving his office  the usual   monthly  impress  to  further frustrate him.

A The governor’s action was giving  Achuba  cause for concern.  This is because he people who depend on him  for  their monthly up keep  attached to his office. ‘’As  a deputy governor, I have staff, whose salaries come under my office , including mine and other allowances  and impress  to run the office’’. He  confirmed that since 2017,  the governor has refused to pay.

The Kogi deputy who could no longer take it had threatened to drag  Bello to Court to force him to pay all his  entitlement , amounting to N81.71 million which remained unpaid   to enable him settle the salaries and allowances of his office  staff including the labourers in his official residence.

He made do his threat as he was said to have engaged the services of  Femi Falana, a Senior Advocate of Nigeria, SAN,  for the legal battle.  The legal luminary, on the instructions of  the Kogi  deputy governor  on July 17, 2019, was said to have  sent a letter to the  Bello, requesting him   to give approval for the  release  all the statutory  allocation  due to the  deputy governor’s office   as  signed by Law and  approved by the state House of Assembly.

The governor, according to sources  may have  turned a deaf ear to  the   request  to release  the funds for  chuba’s office, an indication that he was not ready for  peace.  He was said to prepared the mind of his legal   team  in readiness to meet  Achuba  in Court. There are fears that if he fails to settle the  deputy governor’s entitlement and allowance and he wins the forth coming governorship election in the state,  Achuba may find it difficult to get the  money out from the state government as Bello is determined to deal with him.

An angry  Kogi deputy governor  may have shocked Nigerians, when he  said his life was  under threat by the  killer gunmen  in  the payroll of the governor. He was said to have appealed to Mohammed Adamu,  the Inspector General of Police, IGP, to step in to  save his life.

Many believe that the over three year-old disagreement  between  Bello and Achuba, could only be settled by Kogi voters who are anxiously waiting for the November 16, governorship election in the state exercise their franchise  to vote the governor of their choice who would deliver the dividends of democracy to the state.   Bello is riding on the back of Buhari and his unalloyed support for his Ruga  pet project  to win the November governorship  election in the state.