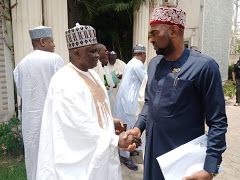 When the 199 Constitutional ,  as amended, was promulgated  into Law  by Abdulsalami Abubakar, a retired Army General and former Head of State, there was a section which gave the Lawmakers an additional responsibility: oversight functions .

Given the oversight legislative duties, which gave the Lawmakers  power  to look into the books of government Agencies and Pastorals  to ensure  that  appointees    comply with the extant Rules and  Regulations  in its Financial Management and recruitment of Staff in accordance with the Federal Character Commission, FCC, the Lawmakers had kept to it.

Past and Present National Assembly Lawmakers were said to have taken advantage of the oversight functions to tactically probe the agencies placed under the  close  watch of their various  Committee.

This is evident going by the visit  of  Ysuf Buba Yakub, Chairman, House of Representaives Committee and  members  to the  Technical Aid Corps , TAC, Directorate,  an Agency under the ministry of Foreign Affairs on Wednesday, March 18, 20202. at Abuja,  the Federal Capital Territory, FCT.

The visit, according to Legislative sources was the first to be undertaken by the Yusuf  led Committee to the agency since its inauguration in 1919.The House Committee Chairman  disclosed  that they were in the TAC Directorate  to familiarise members with the Management Team and the  programmes of the agency ,on one hand, and   to carry out its oversight Functions on the other hand.

The Value News learnt that during the visit ,the  lawmakers took time out  to engage the TAC Directorate  Management team  in all areas relating to its core mandate  and on how it had  used its various programmes to further the realisation of the objectives of the Directorate.

It was gathered that issues relating to funding relevance and the continuous existence of the Directorate in the face of dwindling resources and overlapping of functions with other sister Agencies, including the need for adherence to the  FCC, in the recruitment of Staff and volunteers, were also discussed.

” We are here  to consummate the function of carrying out our  oversight function  and supervision on the entire machinery of Government and those who drive it, a power bestowed on the Lawmakers  by the Constitution,.  He explained  that the framers of the Constitution,, may have seen the importance of the  power of oversight function  as a means of ‘ensuring that things are properly done so that the people, who we truly represent, would  receive the greatest utility from whatever is set up to meet their needs’.

He lamented  that oftentimes, the Lawmakers oversight functions had been  misunderstood as a witch- hunt on other Arms of government, to force them to fall in line. He opined that the oversight function had been  religiously being pursued  to ensure  that personal or group interests do not conflict with that of  the government and, more importantly, to ensure that their  services are driven to the required end to meet the yearnings of the repositories of power: the people.

Going by the discussion  with the Management Team of the TAC, Directorate, the Committee members were said to have learnt one thing:   that since its establishment in 1987, as a platform to deepen co- operation and friendship with some countries in the African Continent, the Caribbean and the Pacific Region, the agency had achieved  remarkable feats  by bringing  knowledge, technical expertise and skills in various  fields of  endeavour  to the  countries ,which  had benefited from the Scheme .

A appreciative  Pius Osunyikunmi, the TAC Directorate  boss had ,expressed gratitude to the lawmakers for their passion to re- energise and re- engineer its vision, stressing  that he has scored a whole lot of unsung  goals for the country in the past. He used the opportunity of the Lawmakers visit to alert them   of the reforms, which he had  initiated since assumption  of office in the Directorate ,but which the challenges ,arising from paucity of funds, would not allow to yield the desired  results.

He  claimed that  the difficulty posed by the inability of the Corps to meet its statutory functions and other  various  commitments, including the new assignments  that had been brought about by  President Muhammadu Buhari Diplomatic Shuttles across the world .

, He noted  that the Katsina state born Nigerian president  had continued to widen the scope of the activities of the Directorate  through commitments made to all the countries he had visited over the last four years ,particular those within  the African continent ,with regards to the objectives and vision of the agency.

He was said to have  implored the Committee members to assist the Directorate to restore the slashed  amount from  its 2020 budget, which had earlier  been approved by the National Assembly ,but not truly reflected as the complete  the need of the agency  at the moment.

The House Committee members visit to the TAC Directorate may have achieved its purpose as the parties agreed on a number of issues. The  Parties  were said to have  agreed that the vision and ideals of the Directorate  were quite noble, which as an initiative of the past , even possesses  better relevance today; especially, in the light of the kind of support Nigeria requires to maintain in  its visibility in the affairs of the world.

They were said to have also agreed to use all available legitimate means to ensure that the Corps receive the maximum support to carry out their programmes  and objectives and to  meet its commitments to the International Community.