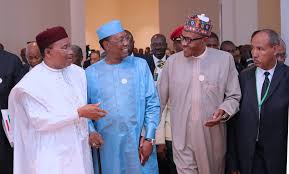 Worried by the activities of smugglers, President Muhammadu Buhari and Patrick Talon, his counterpart in Republic of Benin, were said to have signed a landmark  trade agreement,  the first to be signed by any two African countries in the recent time.

The  agreement was said to have been signed during  the 12th Extra ordinary meeting of the African Union, AU, Heads of States and Government in Niamey, Republic of Niger, on Sunday  July 7, 2019, on  African Continental  Free Trade Area, AfCFTA and the first mid-year  Coordination meeting  of the Union and the Regional  Economic Communities which includes the Economic Community of West African States, ECOWAS .

Attahiru Dahiru, Nigerian Ambassador to Niger, believes that  the AfCFTA, Summit , may have facilitated the signing of the trade pact between the two West African neighbours. The Ambassador is optimistic that more of such pacts would be signed between African countries with the successful of launching of the Trade zone  between Nigeria and  Benin , which had already been signed.

many believe that the launching of the nNigerian-Benin Trade Zone, would be a huge success with the opening f the Sem-Krake Joint Border  developed by the Economic Community of West African States, ECOWAS, in Collation with the European Union, EU .  The Benioise government may have laid the foundation for the of the trade pact with the approval by Talon, the country’s President  that all transit cargoes and exports into Nigeria must pass through the Joint Border for proper documentation and record keeping.

As a prelude to the successful  hosting of the  SU, Economic  Summit, in Niger, Buhari was said to have   donated 47 exotic vehicles  for use of the  visisting Heads of States  and Government  and military equipment worth millions of dollars  to the land locked African country to forestall any attack by BokoHaram Insurgents  operating in the Lake Chad Basin region to disrupt the meeting.

Many believe that   Buhari may have donated the vehicles to Isooufou Mahammadou, the Chairman of ECOWAS and President of Nigeria,   for the AU, Summit, to curry his favour in the fight against the Boko Haram Insurgents in Nigeria. Moreso, to encourage the Niger President to mobilise his troops to block access routes used by the Insurgents operating in their country to enter into  Yobe the state that has a boundary with Niger.

Many believe that with the support of Buhari to his government host the AU, he would do everything  within his powers to support the fight against the Insurgents .  He was said to have assured Buhari to count on his support to flush out the Insurgents from  the north east and the Lake Chad Basin.