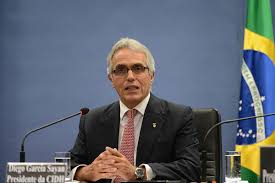 Aware that any further action on Walter Kanu Onnoghen, the suspended Chief Justice of Nigeria , CJN, may incure the wrath of the United Nations, UN, Human Rights Commission, President Muhammadu Buhari, may have hands off from further probing into the matter because of the bad image it is giving to his government internationally.

At present, the government has enough evidence of alleged misconduct against the suspended CJN, going by the reports of the Nigerian Financial Intelligence Unit, NFIU ,and the Economic and Financial Crimes Commission, EFCC, that should warrant the removal of the Cross river state born suspended CJN, from office but Buhari appear to have shifted  the matter to the National Judicial Council, NJC, to decide on.

Diego Garcia Sayan, the UN Special Raapporteur on the Independence of Judges and Lawyers may have given an insight of what would happen to Nigeria if the government did not retrace its step on the Onnoghen matter when he criticised the decision to suspend the former CJN, describing it as ”threats, pressures and interferences” made against the lawyers defending him.

Given an in sighton what should facilitate the suspension or removal of a Juge ,Sayan cited the UN Human Rights  Standard  which provide that Judges  could only be dismissed  from office  on ”serious grounds of misconduct  or incompetence”, an indication that the Nigerian government had not exhausted any of  these considerations before applying the sledge hammer on the suspended CJN.

The  Katsina born Nigerian President and the cabal in the Presidency who are all out to see the back of Onnoghen as the CJN,  may have read the hand writing on the wall  that there is trouble ahead when he said ”any decision to suspend or remove a Judge from office  should be fair  and should be taken  by an independent  Authority , such as Judicial Council  or Court.

He alluded to the President’s claim  that he had acted  in Compliance ” with  an Order  issued by a Tribunal to decide on alleged breaches  of the Code of Conduct of  public officials. He noted that if the President had justified his action based on the recommendation of a Tribunal, but there have  four other Courts  with higher jurisdiction  which had ordered  that proceedings  on the matter be halted but was ignored .  This is an indication that the action may have been pre-meditated to remove him ahead of the Presidential election due to  be held next Saturday.

His suspension may have provided an opportunity for Ibrahim Tanko Mohammed , acting CJN, to oversee the petitions that arise from the conduct of the general elections. Many believe that Buhari and the cabal in the Presidency may have feared that with Onnoghen at the Head of the nation’s Judiciary, it would be difficult for aggrieved APC Candidates to have their way in Court. The last Wednesday arrest of one the alleged Senior Advocates of Nigeria, SAN,  defending him in Court speaks volume. According to him the continued ”threats, pressures  and interference on the work of Judges  constitute ”grave attacks  to the Independence of the Judiciary  and free exercise of the legl profession”.

According to him, ” lawyers should be threatened  or sanctioned  for action taken  in accordance  with  recognised  professional duties , standards and ethics”, insisting  they  play  an essential role in securing  access to Justice and should never suffer.

The intervention of the UNHRC, on the matter may have forced the NJC to  set up a preliminary complaints assessment committee to probe  the responses tendered by Onnoghen and Mohammed , the acting CJN, to the petions against the duo. Soji Oye, Director of Information, NJC,  confirmed that that the members met last Monday to consider the petitions against the duo.

Note that the duo  had earlier been given seven days to respond to the allegations against them.  Oye  also disclosed  that the Council had received another petition   from theIbrahim Magu led Economic and Financial Crimes Commission, EFCC, against Onnoghen, which was said to have been forwarded to him for response within seven working days.

Recall that the EFCC  had initiated on the suspended CJN, prior to his appointment as acting CJN in 2016 and subsequent confirmation on of Yemi Osinbajo, the Vice President in 2017. The Commission may have the NJC  as it became obvious that Buhari may not act on their report which was submitted to him on January 30, 2019, on their secret findings on the suspended CJN.

Tanti-graft agency was said to have claimed in its petition to  the NJC,  that suspended CJN  USD account  in Standard Chartered Bank Plc  had  turnover of $922,657. 00 between October  and September 2016., through several structured deposits by different individuals. The GBP  account of the erstwhile CJN, in the bank ,  according to the Commission had a turnover  of N138,439.00 between  2012 and 2016, made up  of  mostly transfers  and deposits  to the account  by him.

Also, the agency was said to have claimed in the petition that the embattled CJN,  has investments in  Life  Friend Plc , Agricole , Lloyds TSB and Pur Noble. His investments in Life Friends Plc and relation with Agric Cole  Redemption Pro and other identified  Companies  was said to resulted into the payment of $121,116 and $482,966 respectively into his  domiciliary account in Standard Chartered Bank.The agency was said to have further claimed in the petition that the suspended CJN has a Current account turnover of  N44,462,000.00 between 2012 and 2016  made up of mostly transfers and deposits from 2011 and 2013.   The EFCC , in their petition to the NJC, further revealed that he paid  N41 million  to adhoc committee on sales of government houses Abuja to acquire of one the properties ear marked for sale .

The suspended CJN  had reportedly told those that care to listen that all the monies found in his account are his legitimate earnings and oversea medical allowances in the last 50 years on the bench.  It could not be ascertained whether he had submitted his response to the EFCC petition but  Oye the NJC Image maker said the Council would meet on Wednesday, February 13, 2019, under the interim Chairmanship of Umaru Abdullahi, a former President of the Appeal Court to look into the petitions and decide on the mater. There is no gain saying the fact that neither Onnoghen nor the acting CJN, may scale through the NJC and may be relieved of their appointments by the President on the recommendation of the Council. If the Council could conclude their meeting on the vexed issue by tomorrow, it means, that the next most senior Justice to Muhammed, acting CJN, may step in as the country’s CJN  who would oversee the petitions arising from the general elections.