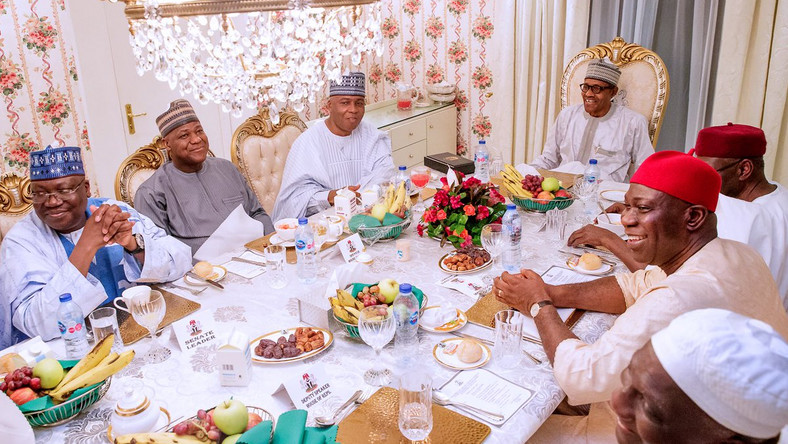 Not many people were surprised  when President Muhammadu Buhari invited Bukola Saraki, the Senate President and Yakubu Dogara, Speaker of   House  of Representatives , who were his arch-rivals in his first term in office and other close Aides, including Abba Kyari, the Chief of Staff,   to join him in  breaking  the Ramadan Fast at the Presidential villa on Tuesday, May 14, 2019.

The Presidency may have included Saraki , Dogara and Lawan Ahmed , the Majority Leader, who is the likely successor to Saraki , to show his appreciation to the duo for their Cooperation  in the recent  to ensure the easy passage of his executive bills.

There was the initial fear that Saraki may not honour the invitation because of the on-going  renewed investigation on him by  the  Ibrahim Magu led Economic and Financial Crimes Commission, EFCC. The Senate President   had  earlier  raised earlier  alarm that the EFCC investigation on him was at the instance of the  President  to stop him from taking up the Ambassadorial appointment of the International Human Rights Commission, IHRC, and had thus kept his distance from the government for much of  March and now. But he kept to his promise to honour the Presidential invitation  to join the President in breaking the Tuesday Ramadan Fast at the Presidential Villa.

The way and manner   the invited guests including Saraki  sat round the dinner table making rib cracking jokes as shown on Channels Television speaks volume.  The president appears to have sent a message to Nigerians: I have no problem with  Saraki or Dogara.

Many believe that  the President may have quickly settled with the duo to ensure that they will attend his inauguration  on May 29, 2019, to void giving  the impression to the world leaders who have been invited for the occasion that there is a crack between the Executive and the leadership of the 8th National Assembly.

Political watchers believe that  the President may have learnt from the mistakes of the past  and ready to provide effective leadership to the country instead of running the country as a dictator without taking into consideration the Constitutional responsibility of each arm of government: Executive,  Legislature and the Judiciary.

Note that in his first term in office,  the President had severally undermined  the National Assembly , particular the Senate, under Saraki  watch. Take for instance the confirmation of the appointment of Magu, a Commissioner of Police, CP, as the Chairman of the EFCC.  The Senate had turned it down but the President still retained  him as acting Chairman of the Commission through Executive fiat till date. There are several such other cases  which had strained the relationship between the two arms of government .

Signs  that the President  was not ready to allow the frosty relationship between him and the  leadership of the 8th National Assembly to follow him into his second term in office  emerged when he sought approval of the Senate in the appointment of Godwin Emefiele, the Central Bank  of Nigeria, CBN, governor, for another five years tenure. he had used the Emefiele case to test the ground but met a different Senate  leadership who were very Cooperative and no longer hostile.  He had sent a letter to the approval for the re-appointment of the Delta state born governor for another five years, despite the strong opposition against him in the Bank.

By carrying the leadership of the National Assembly along,  Saraki , who did not want to delay the approval of the appointment of the CBN, governor, was said to have quickly   read the President’s  letter ”seeking the Lawmakers Confirmation during plenary last Thursday, amidst cheers.

Given the allegations making the rounds that the CBN governor  was embroiled  in Corruption  to the tune of about  N5oo million at the apex Bank which was  not supported by any documentary evidence , Saraki, the Senate President was said to have  handed over the screening exercise   to the Senate Committee on Banking and Finance to handle and report back to the red Chamber .

He was said to have given the Committee one week to complete the assignment  to facilitate the Confirmation of his  appointment  by the President for continuity and stability of the economy, an indication the Senate and the Presidency have resolved their differences and ready to collaborate for the betterment of Nigerians.

The Committee was said to have started sitting  in Earnest  to consider the President’s letter requesting the approval of Emefiele, the CBN, governor for another five years.  The CBN governor was said to have appeared before the Committee, where he was asked questions about the economy and about his plans to ensure that it did not slip back to another recession  with the current US and China trade war.

He was said  to have told the Committee members  that there was no cause for alarm. The Committee is expected to submit its report to the Senate President and subsequent  transmitting of its approval to the President for Confirmation.   Political watchers are optimistic that the Senate under Saraki  watch will conclude discussion on the Emefiele re-appointment as CBN, governor before May 29, 2019, as Saraki may not want to pass the responsibility to the leadership of the 9th Senate to handle.

The Committee had completed its work within the one week schedule   as the Senators adopted  the report of the Committee  on Banking , Insurance and other  Financial Institutions  to approve Emefiele’s appointment as requested by the President. In confirming his  appointment the Senators  had appealed  to further improve on the nation’s economy. The approval is good news to  operators of the Capital market as the naira is bound to appreciate in the official and Parallel market.

It would also gladen the heart of the President who is currently in Saudi on the invitation of the King  on a lesser Hajj.

The  arrest of Zainab Aliyu and Ibrahim Abubakar,   in Saudi Arabia over  alleged drug trafficking was said to have  forced the duo to put aside their difference to work together to save  the two Nigerians  from the Saudi Arabian hang men and  facilitate their eventual safe return to the country.

This may have forced  the President to reached out to Salman Bin Abdulaziz, the King of Saudi  Arabia, to to put in a word to save the lives of the two Nigerians who were at the risk of being killed according to the Islamic Law in the Holy land  for going against the country’s Law.

The intervention of the Nigerian government to save the duo may have informed why Salman Abdulaziz, the Saudi Arabia King invited Buhari to join him in performing  the Umrah, lesser Pilgrimage  in the Kingdom as a way of improving the relationship between the two countries. The Nigeria  President, according to ministry of Foreign Affairs sources  did not hesitate in accepting the invitation as it would him the opportunity to hold  bilateral talks with  the Saudi Arabia King.

Garba  Shehu, a senior Special Assistant  to the President  on Media and Publicity  said  the President would be accompanied by  close personal aides to the oil rich Arab country on Thursday May 16, 2019. Shehu  disclosed that the President  will return back to the country  on Tuesday, May May21, 2019. One of such close aides to the President who would accompany  him on the Saudi Lesser Hajj  , according to Presidency sources, is Abba Kyari, the Chief of Staff.  Kayari  is regarded in political circles as the Head of the Cabal in the Presidency who are holding the President Hostage in taking major decisions on his own, no thanks to Aisha Buhari, the First Lady.

Although, the President and the leadership of the 8th National Assembly has finally resolved their differences,   Ahmed Bola Tinubu, a former governor of Lagos state, and the All Progressive Congress, APC, National Leader and Adams Oshomhole, the party National Chairman, have a different impression of the People’s Democratic Chieftains, who call the shot in the 8th National Assembly. They are enemies to the APC ruling government, the duo would  always  make  people to believe.

There are those who believe that Saraki, the outgoing Senate President may have Cooperate with the President to avoid playing into his hand while out