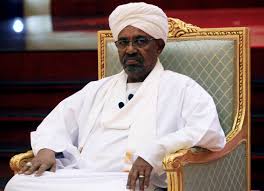 With the downturn in the economy of many African countries, there are fears of a contagious  effect  of Coup de’tat that occured in Sudan  which facilitated  the overthrow of  the government of Omar Al-Barshir,  by the Army in Sudan , today (Thursday, April 11, 2019) in other African countries.

In announcing the overthrow of the former President,  Awad Ibnouf, the minister of  Defense , who has been having a running battle with President Bashir, over h his policies   said a ”transitional military council, TMC,  would replace  Bashir for two years.  As usual with all military coups, the cupists had  suspended the country’s Constitution, dissolved the Cabinet  , declared a state of emergency in the country  in the country for  the bextthree months , an indication of the return of the military back to power in the country.

. It was quickly followed  with the closure of the country;s  land Borders with other  neighbouring countries . This is in addition to the closure of the airspace  until further notice to forestall Commercial flights from coming in  or going outside the country . Airline  operators whose flights were caught up in the wake of the Coup were forced to land in neighbouring  Southern Sudan or other neighbouring countries as they were not allowed to land in Khartoun.

Given out further information   about the coup, Ibnouf,  the minister of Defence  said  the former President has been detained  in  a ”secure place”.  Perhaps to win the support of the political class, the Coupists  had announced the  freeing of all political prisoners  under the regime of the former President. It was welcome relief to them as they threw their weight behind the country new leaders.

Trouble was said to have started for then  President Bashir,  last December,   when he gave Presidential approval for  the price of bread ,a amajor   staple food in the country , to be tripled beyond the reach of ordinary Sudanese.  The situation was so bad that the people mobbilised to protest against the increase to force the government to reverse the  decision. But  the government had responded with a crackdown on the protesters. .

Perhaps to force the protessters into sublic and abandon their sit-in protest, the government banned public gathering, thus making  it an offence to protest. It also granted sweeping powers to the police to deal with protesters. Armed with such sweeping powers, the trigger-hungry  security operatives moved against the people using tear gas  and shooting into the crowd.    Note that  Sudanese protesters had  paralysed economic and social activities in the country for the past four months  by months .

Ibnouf and his his cohorts,  may have taken advantage of the  nation -wide protest and  unpopularity of the  government of Bashir to strike. He may have taken all the precautionary measures to avoid a counter coup by the former President’s loyalists in the Army  by deploying  Army vehicles  carrying troops  across the centre  of Khartoun and other major cities in the country to protect the protesters.  The Sudanese military loyalists were said to have raided the offices of the Islamic Movement , the Ideological   wing  of the former President’s  ruling National Congress Party, NCP.  The coupists may have  feared  that  the Islamic  Movement could mobilise  their followers to work against the new regime which might lead to a counter coup as a religious body.

The popularity of the coup is evident going by the way the  Army watched    scores of protesters ,  climbed  on top of   landcruisers and Armoured vehicles  that had been  posted   to protect  them from  intervenist  forces  and other  security agencies personnel  who were loyal to Bashir

Prior to the military intervention,  Tens of thousands  of the Sudanese had converged  throughout  the day  at the protest  movement’s    main sit -in  outside the military’s  General  Command Headquarters , cheering an, singing and dancing , until information  filtered out   this morning  that the dictator, called Bashir,  has finally been removed from office.

The  people could not hide their  feeling  over  the military take over as they shouted with joy:  the  ”oppressive regime has fallen”.  But the protest leaders  appear not take take chances as they were said to have sent a signal to the military leaders that they would not accept   a full blown military regime  , or they would  continue  their sit -in   and rallies . The leader of the protesters were said to have made it clear   to the Cupists that what  they want is a” Civilian body controlled transition”.   This may be difficult for Ibnouf,  the former Defense minister to accept as he would want to test power in Sudan also.

Recall,that  the Opposition  political leaders in the country   had invited the military to  step in to save the situation from degenerating by forming  a ”transitional government.

Bashir came to power in 1989 and had ruled the country over an uninterupted thirty years. He is described in  political circles one of the oldest  Presidents still  attending the  African Union, AU, Heads of  State and Government  meetings in Addis Ababa, Ethiopia.

It was not surprising why the people were very happy at his fall. This is a lesson to other sit- tight African leaders who pursue unpopular policies to have at the back of their mind there is a limit to suffering   as  people’s power could force them out of office through mass protest.

He becomes the second African leader to be swept out of office through people’s protes in the last one montht.  The first was  Addelaziz  Bouuteflika, the President of Algeria who bowed out  of office   due to mass protest   as the Army stepped in forcing him to resign to avoid throwing the country into Country into Constititsutiional crisis after 20 years rule.