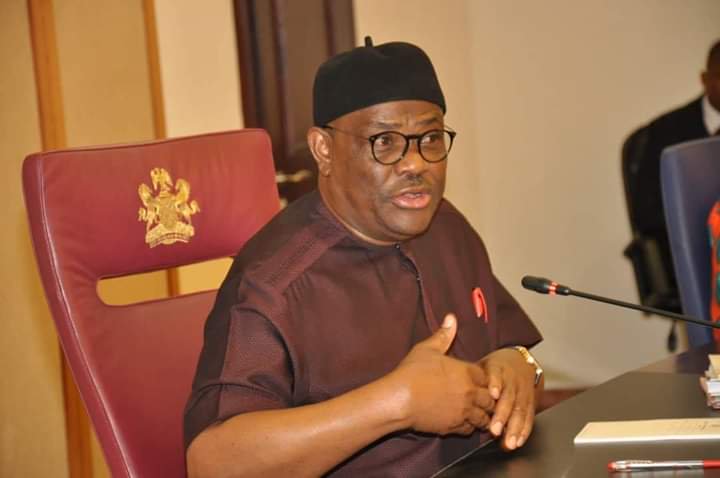 For years there have been rumour making the rounds  that  top military personnel  have been involved in bunkering activities in the Niger Delta ,thus making it difficult  for the  Nigerian Naval personnel in the Eastern Naval Command and the various military Task Force that had been set up by past and present government  to contain the activities of the Blunderers in the region.

Nyesom Wike, governor of Rivers state may have taken advantage of his frosty relationship  between him and   Jamil Sarham, a Major General  and the  General Officer Commanding  the 6 Division of the Nigerian Army  in Port Harcourt, Rivers state to open up on as a Bunkerer, which should give President Muhammadu Buhari  a cause for concern.

An aggrieved Wike, the People’s Democratic Party, PDP, governor of Rivers state,  had told Akinjide Akirinade, a Rear Admiral, the Commander of  the Joint Task Force Operation Delta Safe that the Army GOC   is ”doing illegal bunkering  to raise money to finance  his quest  to emerge as the country’s  next Chief of Army Staff, CAS, if the President  finally drops Tukur Buratai, a Lt. General and  Chief of Army Staff and other Service Chiefs.

According to him, he has his own team  that is making  good money  for him through bunkering. The governor described him as a mole , noting  that after every security meeting  in the state ”he  will release  the decisions taken at the meeting  to the criminal elements to know how to evade security operatives on patrol of Nigerian water Ways under the control of the Eastern Naval Command.

He fears that that if Sarham  eventually emerges as the  country’s CAS, for the good job  he did for the All Progressive Congress, APC, leadership in the state, with the active  support of the Presidency to rig him out in the last governorship  election and install an unpopular Candidate in the state he will compromise the security of the nation.  The Army Chief  came to plot Coup  to impose an unpopular Candidate in the state  allegedly supported by Rotimi Amaechi, a former governor of the state and minister of Transportation but was resisted by   the people, he had said.

The Rivers governor may have gotten wind from his security sources that the  Army GOC, has been tipped by the Katsina born Nigerian born Nigerian President  and had to use use every available  incrimination about  him to stop it before the President ahead to announce his  name as his next CAS. Amaechi may have alluded to this when he said that his major problem with Wike, the Rivers state governor, was his declaration to run for a second term in office in the 2019 , general election.  The former governor had sponsored Tonye Cole, an Oil magnate, as the governor Candidate of the APC, but internal crisis within the party , forced the Supreme Court  to nullify the party list of Candidates for the election including Cole , the governorship Candidate.

This may have  informed the reason why the minister threw his weight behind  Awara Biokpamabo, , the African Action Congress, AAC, governorship Candidate  in the state using Federal might to impose him on the state. The governor had considered the action of the former Rivers state  governor and his military Collaborators laughable   as the party he was promoting  has no elected Candidate   from the state in the National Assembly  and the state House of Assembly  and wondered how the  party will  win the state governorship election without protest from the people of the state.

Wike was said to have told the Naval Chief Task Force Commander that if Army GOC had done the right thing in the state he will support succeed.  He may have sent a signal to the Naval Chief to keep away ways of life of Sarham, the 6th Division Army GOC.  ” help fight I will support ” he had said.  He had and security vehicles including splashing the Task Force with here undisclosed amount of Rear Akirinade led Joint Force to people describe as bribe to win the support of the Task Force.

Sarham, the Army Major may not have benefited from the Rivers state government because of the frosty relation between over alleged owning of illegal refineries in the state.

Note that The Task Joint  Force Commander may have won the heart of of the successes that had been the oil and gas the region as well as the internal the state. He was said to have assured the governor that team will not relent in their effort in fighting crime in the state.

This may not be the first time that the Rivers governor had come into attack on the Army  Major General. Recall the last general election,  had accused the  6th Division of plotting to kill him which was vehemently denied by the Army.  They had accused the compromise  Sarham,  the GOC of the 6th Division but could not have his way. There are insinuations in both official and unofficial circles that  Buhari may not listen to the allegations of the Rivers governor against the Army the 6th Division in Rivers state if he is really in the good books of the President to be appointed the country’s next CAS.