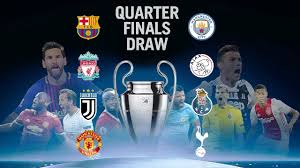 The battle for the 2019 coveted UEFA Champions League Trophy billed for Madrid, Spain in June has now reach the quarter final stage with the draws held on Friday. According to the draws which for the first time in recent years have four teams from the English Premier League, bookmakers favourite Barcelona of Spain which is cruising to the Spanish Laliga title with almost 10 matches remaining has been drawn against Manchester United of England.

Another favourite for the UEFA trophy, Juventus of Italy known as the ‘The Old Ladies’ that parades the mecurial Christiano Ronaldo has been pitched against the youthful Ajax of Netherland that caused an upset by edging out Real Madrid in the Round of 16.

Incidentally, the draws as expected has pitched two English sides together which means one of them will drop on the road to the Semi-Final. Manchester City, current leaders in the English Premiership League will be tackling the London based Tottenham Hotspurs.

Another English team Liverpool which is in contest for the English Premiership title will be tackling FC Porto of Portugal in the Quarter Final of the UEFA Champions Cup.

To reach this stage, Barcelona defeated Lyon, Manchester United prove sport analysts wrong with a superlative come back against PSG of France whom they defeated by 3 goals to one away. Similarly, Ajax defeated the title holders Real Madrid in another eye catching upset while Liverpool beat the German Bundelisiga Champions Bayern Munich while Tottenham had a mince meat of the current leaders in the German football league, Borrusia Dortmund beating them both home and away.

Also, the Portuguese Champions FC Porto send out Roma of Italy in the Round of 16 so as Manchester City thrashed Shalke 04 of Germany.

As the quarter final draws has been unveiled, sports analysts are already predicting Barcelona, Liverpool, Manchester City and Juventus to go through to the Semi- Final.

Ahead of the quarter final, players to look for to make a statement for their clubs include, Lionel Messi of Barcelona, Christiano Ronaldo of Juventus, Harry Kane of Tottenham, Segio Aguero of Manchester City and Mohammed Salah of Liverpool.