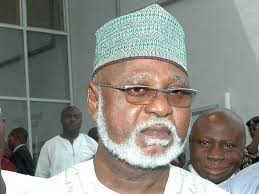 Ahead of the 2019 Presidential elections , Abdulasami Abubakar and Yakubu Gowon,  retired Army Generals and two former military Head of states with the support of the European Union, EU, appears to have embarked on a peace initiative , to ensure a free, fair and credible elections.

Abubakar, Gowon and Ketil Karlsen, the Head of the EU  delegation , in Nigeria, to oversee the 2019 , general elections were said to have invited the 91 political parties allegedly registered by Professor  Mahmood Yakubu  led Independent National Electoral Commission, INEC. The EU may have  sent the high powered delegation  ahead of the 2019 general elections to ensure a smooth conduct of the elections.

Given the length of time allowed the parties to prepare for the meeting by the Abubakar led National Peace Committee, NPC,  many had expected that all the parties registered Presidential Candidates, to honour the invitation.  At the last count , about 73 Presidential Candidates  were said to have attended the Peace meeting. President Muhammadu Buhari, who the Committee member had feared may not be able to attend the meeting because of his busy schedules was said to be present. he was said to have sat down like the  69 other Candidates who were at the meeting to listen to the discussion on the dos and don’ts during the elections, to avoid anything that may mar it and thus a laughing matter in the Comity of nations.

Atiku Abubakar, a former Vice President and Presidential Candidate of the People’s Democratic Party, PDP, who had been endorsed by the ex-Generals who had ruled the country in the past led by  former President Olusegun Obasanjo, Donald Duke, former governor of Cross River state, Oby Ezekwesili, a former minister of Education under the Obasanjo Administration, Kingsley Moghalu, of the Young Progressive Party, YPP, and Omoyele Sowore, the Presidential Candidate of Action Alliance, AA and an Online Publisher based in New York, United States, US, were said to have absented themselves from the high powered meeting.

Professor Yakubu, the Chairman of INEC; Abdulrahman Dambazau, the minister of Interior; Sa’ad  Abubakar III, a retired Brigadier General and Sultan of Sokoto; Adeyeye Adewusi, Oni of Ife, Ebitu Ukiwe, Mohammed Uwais, a  former Chief Justice of the Federation; Matthew Kuukah, a priest and Aliko Dangote, a multi-billionare business mogul and President of Dangote Group of Companies as well as Karslem, who led the EU delegation to the meeting should have encouraged Atiku and the other Absentee Presidential Candidates to show up at the meeting but this is not to be.

Gowon, who may have been co-opted into the Committee to give the Candidates hope, that there is no no preferred Presidential Candidate in the 2019 election was said to have told them that the peace accord that had been signed is binding  on all and should be seen as the ongoing process of the ”development of democracy in the country”.

According to him, the” beauty of democracy  is that it avails  citizens  the right to have a say, on how they are governed” .The former military Head of State regretted that military incursion into politics has contribute to defective democracy in the country.

He has a word of Advice to the party Presidential Candidates:  All those  who aspire to lead the people should be acceptable to the people. This is what is happening in good societies , he said.

Political analysts who spoke to the Value News said the absence of Atiku, the PDP , Presidential Candidate , was a big blow to the party as it would have given the opportunity to speak out his mind given what happened the last Ekiti and Osun states governorship elections where INEC had been accused of rigging the elections in favour of the ruling APC.  Buhari, the party Presidential Candidate may have taken the shine off him as Abubakar, NPC, Chairman, showered praises on him for his ”commitment  towards a conduct of a credible polls in 2019, an indication that no complaints of rigging would be accepted by the Committee.

2 thoughts on “2019: Buhari And Other Presidential Candidates Sign Peace Accord”