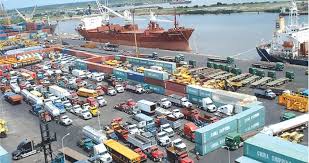 Not many people are surprised at the N404.02 billion generated by the Apapa Command last year . The Command , according to Bashir Abubakar, the Area Comptroller , was given a target of N426.19 billion, to pay into the  Federation  account, an indication that the Command , surpassed the yearly target , despite the drop in the volume of cargo through into the port, particular, bulk cargoes like foreign parboiled rice and wheat.

Between June and December , 2018, the Central Bank of Nigeria , never issued any letter of Credit to any rice importer through the nation’s seaports , as most the foreign rice importers diverted their cargoes to Republic of Benin and other ports in the West African sub-region which were smuggled into the country through unapproved routes and waterways.  The large quantities of rice seizures in various Customs warehouses in the Lagos, Abeokuta, Idiroko, Ibadan, Akure, Seme  in the south -west geo-political Zone speaks volume.

Gaya, a Deputy Comptroller in-charge of Revenue collection may have  known about the Spectacular  collection of the Command for the year that he placed a standing Order early this year with his Aides not to allow any Journalist see him until the end of January when the Area may have broken the  cheery news to them. He fears that Journalist coming to visit him in his office may want to find out from him how much the Command had made in 2018.

Not many people are surprised that the Command could surpass the target for it by the Management.  This is because Gaya, was the Deputy Comptroller, overseeing revenue collection at Onne seaport, Rivers state, when Abubakar was the Area Comptroller.   They had a good working relationship that reflected on the revenue generation of the Command as all areas of revenue leakages were blocked at the port.

Gaya, who has the support of his then boss  at the port was said to have put a close tab on the importers with their agents to ensure that appropriate duties were paid.  it was not surprising that Abubakar saw his deployment from Onne to Apapa Command last year as a home coming to meet his reliable former Deputy Comptroller , Revenue , at Onne, to re-enact the same feat.

The Value News learnt that from the first day , he resumed on duty at the Command, he solicited the Cooperation of all the Deputy Comptrollers, the terminal officials and releasing officers including those at the exit gate to make his job easy.  The officers were said to have assured him of their loyalty. That much was reflected in the 2018 revenue generation of the Command.

Importers and agents who may have thought that Comptroller Abubakar  at Apapa Command , was the same Comptroller they knew were disappointed  as he has become a turn , insisting that the right thing must be done.  The 41 ”40” of Tramadol importer who were optimistic of taken delivery of the drug imports by giving a bribe of N100 million to the Command N50 million to FOU, Zone A, were disappointed. Abubakar  and Riks Lura, a Chief Superintendent of Customs in-charge of the Federal Operations Unit, FOU, Zone A, Operations and Lagos Roving Team, had rejected the bribe which was in bundles of USD. The 41 ”40” Tramodol Containers were sorted out at the port and kept away from other Containers for easy identification. The importer’s agent may have succeeded in exiting one of the ”40” Containers loaded with different brand cartons of the drug but was intercepted by Riks’ who laid ambush for it on the road and took it back to the Command premises.

In spite of the fact that N50 million, part of the bribe was rejected b the FOU, team, Hamid Ali, a retired Colonel and Comptroller General, Nigerian Customs Service, NCS, may have given the credit of rejecting the  bundles USD , worth N150 million  bribe, to Abubakar alone, which earned him a World Customs Organisation, WCO, Award.

The Customs Comptroller ,who could not hide his joy over the recognition by the management that could earn him a WCO  Award and the impressive revenue collection of the Command  attributed  it to the ”selfless  stance  of officers and men of  the Command  and the support of the Comptroller General.  He also attributed to the Command advanced system of monitoring  and collaboration  with other government agencies, particular the Department of State Service, DSS. Much of the credit would also go to the Customs Intelligence Unit, CIU, which did most of the under-ground work that save the government billion naira that could have entered into private pockets by bursting fraudulent  racketeers at the port.