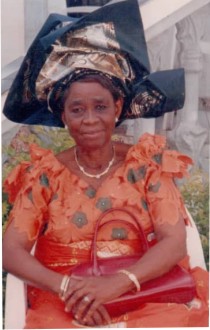 When Anon said that ”Life is the Illusion Death is the Ultimate truth”, not many people understood him. The reality began to dawn on the people all over the world when they began to lose their loved ones.

Hon. Chuma Nzeribe, a maverick politician and former  member of  the House of Representatives, from Anambra state, appears to have joined the list of other prominent Nigerians who have lost either their mothers or fathers, as  death claims his mother,  Ma Ezinne Christiana Nzeribe, popular, in Uzoakwa Ihiala Community as  Ikuneche.

Politicians from the political divides in the state, see the death Ikuneche, as a big loss to the Anambra state born politician, because of their closeness. She was said to have died at the age of 97, which many believe calls for celebration.

The Value News learnt  that since the Mama died last November, the family House of Nzeribe, has been turned to a ‘’Mecca’’ of  a sort for politicians  seeking for relevance in the state. The former member of the House of Representatives and  Chairman of the Committee for Works, according to political sources could not have made much appreciable impact in the House without the support of the  late aged mother, who was said  to have always been a source of inspiration and guidance to him.

Going by the burial arrangement released by the family she will be interred on  January 8, 2020 at Late Chief John Nzeribe’s compound, Umudike, Uzoakwa Ihiala . As a prelude to the final burial, a mass vigil has been slated for January 7, 2020  by 5 PM prompt at the Late Chief Nzeribe’s compound.

Late Ma Nzeribe was a highly respected and   committed  Catholic who was said to have participated in all the Diocesean activities and very generous. It is expected that all Catholic faithfuls in  Anambra state, who knows her worth   while  alive would be at Uzoakwa Ihiala, to pay  their last respect to the deceased.

Among the children of the late Ikuneche  are  Dr. Mrs. Ijeoma Umolu,  Mrs. Priscila Nnabuife,  Hon. Chuma Nzeribe, Mrs. Amaka Ubajekwe, Ntomchukwu Nzeribe, who is an Assistant General Manager, AGM, Fidelity bank, regarded as one of the fastest  growing new generation Banks in the country and  Okechukwu Nzeribe who lives in London, United Kingdom, UK .

She was said to have  lived a fulfilled life having great grand  children who were always around her in the village.