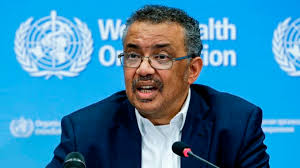 Barely one month that Madagascar, a counry in East Africa,  announced  to the world  that it had  found the herbal drugs for the cure of the Wuhan Town, in the  Hebei province of the Asian country of  China emerged Corona virus pandemic, popular, COVID  19, the  World Health Organisation, WHO, a health agency of the United Nations, has begun a solidarity trial  for a Treatment  of the disease.

Umaro Emalo, President of Guineas Bisau has presented the native remdy to President Muhammadu Buari, who had promised him that it would go through the normal scientific process before been admistered on Nigerian COVID 19 patients. That much was confirmed by Garba Shehu, senior Special Assistant to the President on Media and Publicity.

Recall, since the  Chinese Authorities reported to the agency about the outbreak of the   disease in the Hebei Province of the country on December 31, 2019, it had stepped up the search to find the drug for th  Treatment by  working with scientists, researchers and  prominent Pharmaceutical Companies across the world .

Many had lost hope that  the  agency may never make a headway  in finding the drugs for the cure of the  COVID 19, when the United States, which had been funding  the agency in its operations withdrew in protest that it was using its money to support China which had exported the disease toall parts of the world.

This may have informed why  China had  to step in to support the Organisation by giving an initial financial support of $20 billion and an additional $30 billion, thus, bringing  the total amount to $50 billion  to  boost its scientific and research works in order facilitate  the design and development of the  drugs and vaccines for the Treatment of the disease, now  ravaging the world.

In spite of the fact  that China had  taken  over the funding of the WHO scientific and research works to fill the vacuum left by the North American country of  the US, it never stopped  making efforts  to ensure that there is a cure for the disease. On May 29, 2020, the country was said to have announced an experimental drug which had proven effective  in Treating COVID 19 PA 19 but which  needed the approval of the WHO for Commercial production and distribution to other countries.

Recall that the US President, Donald Trump, had said that with or without a  vaccine ‘’the virus  is going to be gone’’.  The fallout was the launching of the  ‘’Solidarity’,   which is an International clinical  trial to help find  an effective Treatment  for COVID 19 which  the UN health agency  and its partners, particular, the US, European Union, United Kingdom, UK , china and other developed economies had developed.

According to a WHO source, the  solidarity  is expected to compare  four Treatment options  against standard care in order to assess their relative effectiveness against the disease. As a prelude to the use of the drugs, the agency was said to have masterminded the enrolling  of COVID19,  patients in multiple countries  as the trial  aims to rapidly discover  whether any of the drugs  could  slow the disease progression  or improve survival. The agency was said to have made it known  to Physicians that ‘’ other drugs could  be added in the Treatment of the disease  based   on emerging evidence’’.

Based  on evidence  from laboratory , animal and clinical studies , the following  Treatment options  were said to have been selected: Remdesivir, Lopinavir/Ritonavir,Lopinavir/Ritonavir with  Interferon beta-la and Chloroquine or Hydroxycholoroquine.

Remdesivir was an Ebola Treatment drug , which medical experts believe  may have some effect in COVID 19 patients. Lopnavir/Ritonavir, according to medical sources  were licensed   for Tratment of HIV while Interferon  beta-la  was used for the Treatment of  multiple  sclerosis.  Other drugs on the list of the Solidarity clinical trial are Choloquine and  Hydroxycholoroquine   which are closely related and used in the Treatment of  malaria and rheumatology  conditions respectively.

Recent Studies in China and France had proved  that there possible benefit of Choloroquine  Phosphate  against  pneumonia  which is caused by COVID 19 bu, however, needed confirmation  through the randomized trials.

Note that while  randomized clinical trials  could take  years to design  and conduct,  the pressure  the COVID 119,   on health systems , across the world, may have forced the WHO , to consider the need for speed and scale  in the trial. There are indications that the Solidarity trial   will reduce the time  by  80 percent.

It was reliable that Lagos and four other states are currently participating  in the ongoing  WHO  Solidarity  International Clinical trial  for the Treatment  for the pandemic  in the US.  This brings to five states which Boss Mustapha, Chairman, Presidential task Force , PTF, on COVID 19, had said are participating in the clinical trial. This is good good news for Nigeria because of the rising cases of patients in the recent time.

There are indications that the drugs had already been administered on some COVID 19 patients in Lagos  and they had recovered  but had be warned by officials of the Nigerian center for Disease Control, NCDC,  not to give out the deails of the Treatment process to avoid  to self medication.

The Solidarity Trial, according to a medical expert provides a simplified procedure  that could  enable even  overloaded  hospitals  to participate  with no paper work required. The Magazine learnt that  as at  April 21, 2020,  over 100 countries  were already  working together  to find effective  therapeutics  as soon as possible via trial.

The UN  health agency  was said to have  facilitated  access to thousands  of Treatment courses  for the clinical trial through  donations from a number of Pharmaceutical manufacturing Companies.  This may have informed why the agency  is  inviting  developers  and companies  to collaborate  on ensuring  affordability  and availability  of the treatment  options   if they prove effective.

At present, no fewer than  5,445  persons were said to have contacted the disease  with the discovery of  additional 288 cases  by the NCDC , ON Saturday, May 16, 2020. Lagos, which had remained the epicenter of the  disease  in the country , according  to the ministry of Health agency had produced  much of the COVID 19 patients, which  was put at 179.