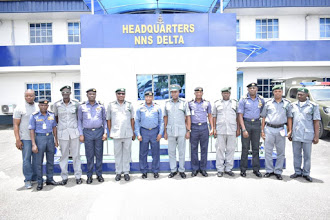 Aware of the strategies adopted by their former boss in giving a decisive blow to the smugglers operating At the seme axisis, between August 2018 and December, 2019, the duo  were  said to have  embarked on a familisation Tour of the areas under their  respective Commands to acquaint themselves  with the stakeholders and other security agencies personnel, particular Naval and Marine police personnel including the Traditional rulers of the Border Communities.

Note that Ndani, has every reason  to take the working  tour of the areas under the Eastern Marine Command  very serious because of the activities of the water ways smugglers who had been molesting ocean going vessels and their Crew members over the years  at the Niger Delta region.

He was said to have made it clear to those that cares to listen that he will do everything within his powers to  protect  the Oil and Gas facilities in the  region. It was a clear-cut message  a to the Oil thieves , operating in the region in the guise of being smugglers that it is  no longer going to be business as usual as he had promised to maintain a 24 hours patrol and surveillance of the S waterways . That may have gladdened the heart of Comptroller Wushishi, his Counterpart in the Oil and Gas  Free Zone Authority ,  Command, Onne, Rivers state.

Recall that he had started the working  visit of the Niger Delta states, where there are  Oil Terminals to see things himself and have a one on one interaction with the operators , his Customs officers and other security agencies personnel  at the Terminals to keep a close tab o the loading and movement of vessels out of the terminals to their various destinations outside the country.

He may have been guided on the working Tours of the region  with the killing of nine officers of the Command   who were doing  their legitimate duties  by the  dare-devil waterways smugglers some years ago. The Eastern Marine Command Customs Comptroller has every reason to believe that he would have an upper hand in dealing with the smugglers operating in  the waterways  under Eastern Marine Command because he has one of the best anti-smuggling vessels ,named  Group of Nine, being the number the killed officers by the smuggers during the attack..  The vessel which  had  already  been Commissioned and deployed to the Command by Ali, the Customs Comptroller General had been in use since 2018, to checkmate the waterways smugglers by  past Comptrollers of the Command.

The Customs Comptroller visit to the areas under the Eastern Marine Maritime Command was said to have taken him to Cross River state, where he had the opportunity of meeting, David Adeniran, a Rear Admiral and Commander, Eastern Naval Command as well as  the  Commissioner of Police, Eastern Marine Command .

He  was  said to  held a closed  door meeting with each one of them,  in their respective offices at Calabar. They were said to have  agreed on areas of Collaboration on  how to tackle the waterways smugglers operating in the  region  to give a breather  to the ocean –going vessels and their Crew members.

The tour was said to have also taken him and his entourage to Bayelsa state where he was said to have used the  opportunity to visit the Nigerian Agip Oil Company , popular, NAOC, oil  Terminal at Brass and the Brass Liquefied Natural Gas, BLNG, project . He was said to have also used the opportunity to talk to the officers  and men of the Command deployed to the Brassoil Terminal, urging them to be  of good behavior as they must not give room for Compromise.Rece. he had Earlier visited the Bony Liquefied Natural Gas , NLNG, plant in Bonny ,Rivers state, where he had discussion with the Stakeholders including his men on the field..

The Customs Comptroller  was said to have continued the working  Tour  with   a visit to Delta state on Monday, March  24, 2020. The visit was said to have  given him an opportunity of visiting NNS Delta and  the  Nigerian Police Force, Marine Command, Warri.  He was said to have held a closed door meeting  with Ibrahim Dewu, a Rear Admiral and the  Commanding Officer, NNS, Delta and the Commissioner of Police,  Delta state Marine Police Command.

The good news was that Dewu, the NNS Delta, Commander,  and the Marine Command, Police Commissioner in the state had individually agreed to support the Customs Comptroller in his anti-smuggling war in the state. That may have given Comptroller Ndani  hope that  other security agencies  personnel were solidly  behind him in the anti-smuggling in the Niger Delta region.

But he has to  watch it and not put all his hopes on the Naval or Marine police personnel to help him out in the anti-smuggling war. this is because most of the big time, waterways smugglers,  have strong link with these other security agencies personnel who, many believe give out information to them,  According to a source,. ”They operate as a syndicate’’.

The Bauchi/Gombe Customs Comptroller  was said to have also embarked   on a working Tour of the areas under the control of the Command.  The familisation Tour , according to an insider had  taken him to the Gombe outstation on Monday, March 24, 2020.

Addressing the officers,  he was said to have  declared  that he would not ‘”condone  any form of misconduct: aiding or abetting smugglers’’. by officers. He was said to have warned that officers found Compromising their position would be shown the way out from the service. This is a bad news for those who had been aiding and abetting smugglers to flood the Nigerian  markets  with foreign par boiled rice over the years..

With the mandate given to him by the Comptroller General  to rid the states of Bauchi and Gombe, of the dare devil smugglers, Jibo may have known that he cannot do it alone as he needed  the support and Cooperation of the officers and men of the Command  to succeed. He may have realised early enough that talking tough to them all the time like Muhammed, his former boss, always do while addressing officers, may not solve the problem that he had calmed himself.

He was said to have resorted to advising the officers and men of the Command to maintain a high level of awareness and preservation in view of the concerns  towards COVID 19 pandemic ravaging the  global Community in the discharge of  their duties..

He knew  that he will not fight the anti-smuggling battle alone and that he needed to carry the officers along . Moreso, he knew that he will the support of the state government as well to fight the antismuggling war in the state.. It was not surprising why he was said to have paid a Courtesy call on Manessa Daniel Jatau, the state Deputy  governor, who may have stood in for the governor.

Comptroller Jibohad solicited the support of the state governor in the anti-smuggling war, promising to be fair to all.. Jatau may have spoken the mind of Inuwa Yahaya, the state governor, when he promised that the state  government  would not hesitate to give him all the necessary support to succeed.

He was said to have also  assured him that the government would maintain the good working relationship that had existed with the Command the .  Comptroller Jibo may have left  the Gombe state deputy governor’s office  a  fulfilled person  that he has the support of the Gombe state  government in prosecution of the anti-smuggling war..

COVID 19:Buhari Demands Approval Of A N500 billion Intervention Fund From the National Assembly As The IMF Makes Available $50 billion to Contain The Disease In 80 Countries