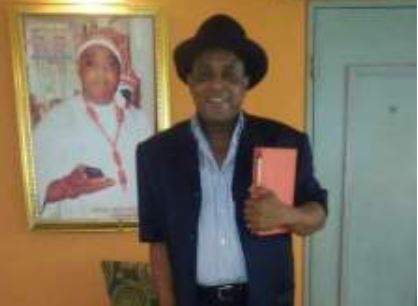 The of maritime journalists was a mourning numbed with the shock of the death of one own, Chief Ubon Jimmy Akpan, who passed away last week a brief illness. The death of Ubon was a rude shock to the operators who had come to erudition of veteran journalist.

In a glowing tribute paid to the departed icon journalism, Elder Asu Beks, who is also a veteran and close associate of late Ubon, as he was fondly called, reminiscent on the glorious career of Ubon in journalism.

“He had a distinguished career as a practicing journalist with over 33 years experience in major media organisations, including The Punch and Champion newspapers. “Although he covered many beats and served as state correspondent in a number of states, it was in the maritime industry that he excelled and found fulfillment as he transcended the reportage of the maritime beat to become an entrepreneur in the shipping industry.

“In 1999, he teamed up with some close friends – Asu Beks, Emeka Okoroanyanwu, Alban Opara and Pius Mordi – to co-found Maritime Publications Limited which pioneered the publication journal through Maritime Quarterly magazine.

“Reputed for his boundless energy, , Ubon Akpan was also a former president of the Maritime Reporters Association of Nigeria (MARAN) and a founding member of the League of Maritime Editors.

“He carved a niche for himself as an outspoken and forthright commentator, analyst and stakeholder in the maritime industry. “In his commentaries and interventions, Akpan in pushing his conviction that the potential in the can drive Nigeria’s economy with the right policy mix.

“Akpan was also devoted to his community and for the uplifting of his people. He was a one-time the Ibiono Ibom Welfare and Development Association (IWADA) in various capacities. He also served in the executive council Akwa Ibom  State Community (), Lagos branch.

“His early education began at the famous Hope Waddell Training Institute, Calabar from where he proceeded to The Polytechnic, Calabar where he obtained a Higher National Diploma (HND) in Mass Communication. He went to of Ibadan where he completed a program in Masters in Communication Arts (MCA).

“Witty, boisterous and outspoken, Ubon as he was called by his friends and colleagues longed for a better Nigeria welcoming to entrepreneurship, a factor that made him shun paid employment to his dream of being a genuine stakeholder in Nigeria’s shipping industry”

Ubon, who was survived children, wife siblings, would be buried according to the arrangement that would soon be announced by his family. The deceased was 56 years of age.