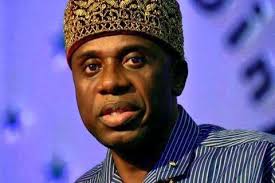 Those who think that President Muhammadu of the ruling All Progressive Congress  is not conscious of his populist policies that are designed  to win the heart of the poor  to vote him in this forthcoming election would be  disappointed . This is because he is getting feedback from his foot soldiers about the response of Nigerians to some of these people-oriented policies. One of these policies, which has generated much controversy , in the recent time is the trader Moni .

Indeed, wherever two or three  traders are gathered , in the market what they would be talking about is the ”Trader Moni”, which has earned Yemi Osinbajo, the Vice President, the title” friend of the market women”, in government circles.  Barely one month to the Presidential and National Assembly elections, Buhari was said to have come up with another populist policy. This time, it is a three months free train services ostensibly to touch the life of the poor people  who patronise railway services.

Rotimi Amaechi, a former of governor of Rivers state and minister of Transportation , at the  party Presidential rally in Lagos on Saturday, February 9, 2019, announced the new policy to the  admiration of the people.

The pronouncement may  have gladdened the heart of  the people who had trooped out to catch a glimpse of the APC Presidential Candidate who has come to Campaign for support in the state. The joy in the face of the  people, who are mostly from the north, knew no bounds. Most of these passengers ,who are mostly  Kano,  shuttle between Iddo, Lagos-Jebba-Lafia and back.  Amaechi who had dressed casual to the Campaign rally, as if he was going for the popular ”Shaku  Shaku” dance may have  looked ordinary but he has the ear of the Katsina state born Nigerian President.

Prior to the announcement, The Value News learnt officials of the NRC, had already started implementing the decision which had been communicated to them earlier by the minister . The implementation of the directive may have become necessary to ensure that people troop out enmase to welcome the APC Presidential Candidate to Lagos for the Campaign rally last Saturday .

The introduction of Asiwaju Bola Tinubu,  a former governor of Lagos state and Chairman, APC, Presidential Campaign Council to the podium may have changed the tempo of the Campaign as he brought back  the mind of the people  to listen to the party political sermon which was put in  the form of a question: Will you vote for PDP? . To which the people chorused no. Tinubu, popular Jagaban , said Buhari was not in the state to make” empty promises”, stating whatever promise that had been made to the people would surely be fulfilled . He was alluding to the three months free train ride between Lagos, Kano, Jebba and Lafia.

The question on the lips of many was: how can a minister who had repeatedly cried out  that for each locomotive  the government spends about N56 million monthly   but gets only N16 million in return from the charge of a paltry sum of N600.00  fare per passenger, between Kaduna and Abuja,  be initiating such a populist policy that is uneconomical . He has said that the government was dashing out N40 million to Nigerians who utilise train services per month, thus forcing him to approve an increase in fare between Kaduna- Abuja route as demanded by the Corporation management.

Given reasons for the increase, he said  the actual intent of the Katsina state born  which is to allow  the agency use its train  to move poor people from Kaduna to Abuja have been defeated as rich people pack their cars  and use the railway services, thus chasing away the poor people.  The minister justified  the increase in fare by say saying that ,”since it is the rich people  that now use the train services, we have no  option but to jerk up the prices”, describing it as ”appropriate pricing”.

The former Rivers state governor remarks that  the pricing was according to its pocket noting  that it will not affect government subsidy on the railway services as it would continue to do it sounds  amusing. He maintained that his expectation  is not for the Kaduna- Abuja route  rail services, which started operation 2016, to make profit but to break even.

Fidet Okhiria, the Corporation , Managing Director had said that they carry about one million passengers daily  since it increased its locomotives from four to 14, noting that its profit are measured by service delivery.  Perhaps, to ensure that  passengers could get train services in every train terminus every 30 minutes, the NRC Authority was said to have  for more coaches  and locomotives  which would arrive the country soon. An elated Amaechi had said that just as the Kaduna-Abuja  railway is up and running, the Itakpe-Warri line is being test -run  before going commercial.

Political analysts believe that the three months free train services for a government agency that needed money to remain afloat was a ploy by the APC to buy votes in the forthcoming general elections  and to rubbish Atiku Abubakar, a former Vice President and People’s Democratic Party Presidential Candidate, PDP,  in the election.

Unconfirmed report said the minister has asked the NRC, management to calculate the cost of running the locomotive engines for the three months and the loses that may be incurred  for not collecting fares from passengers and pass  it to the ministry for refund.