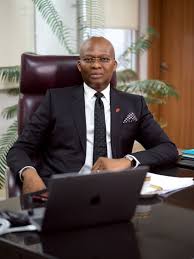 More facts have emerged why the United Bank For Africa, UBA, plc, a pan African  Bank, under the close watch of Kingsley Uzoka, had been  ranked  as one of the most technologically advanced bank in the African Continent. This is because the bank had embarked in cutting   edge technology of automating  processes, training  and  rewarding excellence .

. The  bank may have have embarked on the cutting edge technology  to  ensure that millions of Customers both within and outside the country enjoy ‘’seamless and world -class banking services’’ .  Given its innovation upgrading of its technology,  which had put it as one of  the three  leading  banks in the country that is very active in the Social Media, going by  report by Alder  Consulting, that ‘’it is to ensure  that Customers’  expectations are met and surpassed ‘’.

The Money Deposit Bank, MDB,  according to insider sources   had invested  millions of naira over the years  in building  a robust and secure  e-banking  Platform that had supported its banking Operations,  both within and outside the country in strategic partnerships with some International Organisations in order to keep going higher.

There is no gain saying the fact  that  the Pan African bank besides   being active  on twitter, Facebook, Youtube, Instagram, Goggle plus and also running a Corporate Blog,  was said to have developed   strategies  aimed at  making  seamless and effortless for the millions of its existing  and potential  customers while also ensuring the safety of their transactions.

It is instructive to note that  the bank had also developed  a mobile App , that is capable  of transforming  the way banking  operations is carried  out across Africa. This may have informed why the bank in the recent time  had introduced  some unique features  on  the mobile App and other digital  Platforms that had set it far and  above other  competitors and thus, allow  the customers to carry out  their banking tractions seamless across all channels.

Last August, Sampson Aneke Group Head, Digital banking,  had said that the bank  had taken steps  ahead of its major Competitors to navigate alternate banking  channels in a bid to serve  its Customers  much better, amid the Wuhan town in the Hebei Province of the Asian country of China emerged Coronavirus, popular , COVID 19 and beyond.

.Alex Alozie, the Bank’s Head of Operations,  who could not hide his feelings  about the automation of its processes and upgrading of its technology   said the bank had always  put the Customer first. Given an insider information on the milestones that had been achieved  in its digital technology journey over the last one year  that it had  embarked  on intensive  drive to transform its services across all service touch points  including  but  not limited  to banking halls, channels, internet, mobile, and USSD in Nigeria and the 19 African countries including the North American country of the United States , United Kingdom and Europe, where it had established its presence.

Alozie had said that the bank  focused on the intensive  drive to transform its services  to ensure that Customers   enjoy  self- service  ,where they can  carry out their transactions  seamlessly on their smart phones without visiting the banking hall. The Value News could authoritatively confirm that this is true  in making payments  to suppliers and other creditors  including transferring money to friends and family members  between March23, 2020 and much of September during the  pandemic lock down.

An elated Alozie, disclosed that the transformation drive  had further boosted  the Customers’ confidence  on the bank operations as  the services   are provided  ease. He disclosed that the pandemic brought out the best in the bank operations in Nigeria and other parts of the world. He cited the newly  improved   products like the UBA connect which is one of the services that was said to have been introduced by the bank  where Customers could easily carry  out their transactions  from anywhere in  the world . This is in addition  to its recently improved  mobile App. This may have informed  why  the bank operations had also recorded remarkable improvement in the recent time, particular, at  the branches across the country.The banker had said that Customers have no cause’’ to worry about failed transactions as ‘’the bank has taken relevant corrective  and preventive measures for service improvement’’.

Michelle Nwoga,  the UBA’s Head of Marketing and Customer Experience, had said that ‘’ bank is focused  on being  more intentional in the quality  of is service-delivery  to Customers. She stressed that the bank strategic initiatives which is  geared towards improved operations had been implemented . According to her, the essence of implementing the strategic initiatives is ‘’to deliver  a differentiated  experience  to Customers  across all service touchpoints’’.

She was said to have  assured those  that cares to listen that  the Pan African bank  is keen  on meeting  the demands  of today’s  diversified Customer base   by consistently focusing on innovation, process re-engineering, experience, optimization and technology upgrade, to confirm its leadership position in the nation’s banking industry.

She opined that , ‘’that it would go a long way  to improve its service delivery , improve  Customers’ satisfaction, and deepen its market share’’. Besides, the innovation, process re-engineering and the bank technology upgrade, the bank was said to have  also  embarked  on equipping the staff in order to deliver exceptional service to Customers, while leveraging  on its data for insight to guide business decision making.

She may have gladdened the heart of Customers when she said  that ‘’the bank is no longer  a one-size fits –all organization, as it could  personalise  services based on individual  specific demands’’, noting that  it was adopted  because the Customer is the one that matters. This may have  informed  why  the bank had tailoured  its activities  in line with Customers’ expectations.Nwoga, may have taken advantage of the Customer  service week, which is  held annually  to speak out.