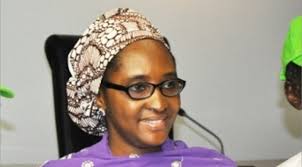 Those who think that President Muhammadu closure of the Borders across the country which had affected the free movement of goods and services between  the West African countries of Nigeria, Republic of Benin and Niger, particular , will be permanent , may have to do a  do a rethink.

Hajia Zainab  Ahmed , minister of Finance, Budget and National Planning  has made it clear to  those that cares  to listen that it is a temporary measure basically to force the two neighbouring countries to comply with the the the International Law on transit cargoes  and the Economic , Community of West African States, ECOWAS,  Trade Liberalisation Scheme, ECOWAS ETLs.

Hajia Ahmed is optimistic that the issues raised by the government with the neigbouring countries  would  soon be resolved to facilitate the reopening of the Borders.  She disclosed that  discussions  with the  countries on the Border closure have reached advanced stage , noting that the  government  is expecting  every party  to respect  the  Transit Cargo Codes and the ECOWAS  ETLS Protocols, which   all the  countries are committed to.

Already,  Issoufou Mohammad, President of Niger, with the backing of the country’s National Assembly , was said to have banned  the re-exportation of rice , in any form to Nigeria.  This is just one  area of the  government Complaints as it want the country to go further  than that  by ensuring total  blockage of its borders  to forestall  smugglers  from using it  to further sabotage Nigeria’s economy.

Recall that Lai Mohammed , the minister of Information  and Culture, had said on Monday, November 25, 2019, at Seme/Krake , a Joint Border Community between Nigeria and Republic of Benin that the Borders across the country were closed because the neighbouring countries were opening their ports to far flung countries to use and dump their manufactured and Agricultural goods, which were smuggled into the Nigeria market through the country porous borders, thus  turning the country into third party goods. The minister may have alluded to the Asian countries of China, India, Thailand  and Malaysia  including the European country of France.

The minister lamented that goods on the government prohibition list such as second hand clothing, foreign par boiled rice, and processed Vegetable oil had always found their way into the  country through  unapproved routes from these countries.

The minister who could no longer bear the pressure  within and outside the African  Continent  to give reasons for the Border Closure, was said to have been asked to use her position  in the Buhari Administration to influence the reopening of the Borders across the country to the ease the suffering of the people.

She  was said said to have told those that cares to listen that  the  government has taken the step at this early stage to close the Borders with the neighbouring countries cross the country to ensure that when it starts the implementation of  the African Continental Free Trade Agreement , AfCFTA there will not be any reason to worry about abuse by the trading partners.

Indeed , this had been the major worry of the Katsina state born Nigerian President  when he signed the AfCTA  deal with Patrick talon, his counterpart at Benin at the extra-ordinary meeting of the African Heads of States and Government , in Niamey , Niger , last July.

Many believe that this  may  have  been what had delayed the president from appending his signature  to AfCFTA   working document when several other African countries had signed it including Ghana and South Africa. Note the only country for now, that had not  signed the AfCFTA, document, is the Southern African country of Eriterea.

As a prelude to reopening the  closed Borders, the parties  ongoing discussions  at Abuja, the Federal Capital Territory, FCT, Nigeria, which started   on  Sunday, November 24, 2019 were said to have  ended last Wednesday, November 27, 2019.

Security watchers believe that the neighbouring countries of Benin and Niger, according Business analysts, may have learnt their  lesson from the Border closure because of the adverse effects on their economies  in the last three months.

Hajia  Ahmed, the minister of Finance, Budget and National Planning , said that much , ‘’I hope our neighbours  will respect the outcomes of  those discussions  and agreement  that we are all committed  to  and then the  Borders  will be  reopened  for normal movement of  goods and services between the  neighbouring countries without hindrance to resume.

Note that the Republic of Benin and Niger, may not be alone in feeling the pinch of the Border closure. Even Nigeria was not left out  despite   efforts by Godwin Emefiele, the governor of Central Bank of Nigeria, CBN,  to discredit the National Bureau of Statistics, NBS, report about the astronomical rise of the Inflation rate in the   country’s economy.

The minister, who is deeply involved in running the nation’s economy  and an insider of the Buhari Administration  appears to have agreed with the NBS report, when she said that  the ‘’increase  in  the prices of  food  items that had been  witnessed in the country since September and now   was propelled by the Border closure.

In a related development,  the United Nations  High Commission  For Refuges, UNHCR,  had said that  that there  are about 218,00 Nigeria refuges  in the West African countries of Niger and Tchad including the Central  African country of Camerron. These waas said to have been confirmed  by the UNHCR country Representative , Anthonio Canhandula, urging the government to created the enabling environment that  would  facilitate the return of the refuges  to the country .

Politcal analysts believe that the refuge  situation in these countries  may have been made oworse both for the Border closure. Note that the Border Drills Operatives, alone ,  had arrested over 260 illegal immigrants in the country in the last three months

. Prior to the Border Drills,  Nigeria was said to have been accommodating  over 46,000 refuges, from Cameroon alone,  which  according Canhandula, the UNHCR,  country Representative  were spread  across  Benue, Cross River and Taraba states.