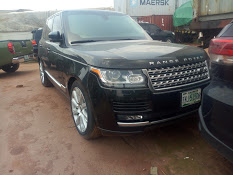 Smugglers have never had it so bad in the , particular along the Lagos -Benin, road in the recent. This is because of the tight security that had been mounted in the area by the Command anti-smuggling patrol teams Coordinated by Ahmad Shuaibu, at the instance of by  Olusemire  Kayode, Comptroller, Federal Operations Unit, FOU, Zone C, Owerri, Imo state. From Benin, Owerri,  Abakiliki to Calabar, the story was the same: tight security. This is evident going by the wide of Contrabands seized by the Command which are scattered all over the government warehouses, GWH, in Benin, Owerri, Enugu Calabar. range from exotic foreign parboiled rice, vegetable used clothing to fairly used clothing.

When The Value News visited the GWH, Benin,  on Friday, March 29, 2019, the seized exotic vehicles found on ground was very surprising . Among them was  A bullet proof, Range Rover, Super Charged, 2013, model,  Rose Royce, Mercedes model, G. Wagon 450, 2016 model. The vehicles, according to Kayode, the Customs Area Comptroller, were seized  between February and March,  during the conduct of the general election by the Independent National Electoral Commission, INEC.  The smugglers may have taken advantage that  Customs personnel may  not be effective on the road because of the general elections  to put  the exotic vehicles on the road to deliver to their importers in the south east

Unknown to them FOU, Zone C, officers had mounted tight security at the Benin toll gate that it would be difficult for flies to pass unnoticed. It was therefore not very surprising why the vehicles  were intercepted and transferred to the GWH in Benin, the Edo state Capital. An elated Customs Comptroller described his officers as very ”diligent, Committed and dogged ” in their anti-smuggling operations.

An angry Customs Comptroller lamented, ”  we have people who travel abroad to buy these exotic are worth millions of naira who prefer not to pay duty but the engage the services of cross Border go through unapproved routes to bring it into the country.

Appealing to smugglers to turn a new leaf  as there is no hiding place for them in the southeast  or any part of the Niger Delta, to carry out their nefarious activities , he maintained  that  they are equal to the task to scuttle  any new strategy or strategies  adopted  by them  to smuggle Contrabands  into the country.

Perhaps, to  make the smugglers understand  about the dangers of smuggling to the economy, the Customs Comptroller was said to have drawn a programme to sensitise the people about the dangers of smuggling in the Command areas of jurisdiction which covers  Delta, Edo, Rivers, Bayelsa, Akwa Ibom and cross River, the six states in the south-south geo-political region, as  well as Imo, Enugu, Eboyi, Anambra and Abia, State five states in the south east, to the economy.

One seizure by the Command which may have shocked many that something was wrong with the nation’s ports of Apapa, Tin-can Island, Kirikiri Lighter terminal, KLT, phases 1 and 2, was the interception of a suspected ”40” Container, allegedly  declared  as carrying spared parts but on examination found to be  stocked with used fridges and other Contrabands heading to the east.

Efforts to get the name of the port where the Container was released did not materialise but a source  disclosed that the  FOU, Zone C, Customs boss , who had written to the Comptroller of the Command linked with the release of the Consignment to get to the root of the matter.

The Command was also said to have seized about 2, 900  ”50” Kg bags of foreign parboiled rice.  Giving insider information, Kayode, the Command Customs Comptroller disclosed the rice Contraband were seized at different times in concealed in trucks carrying cement or Laccasera drinks, particular, Dangote trucks.  Worried by the activities of these Corporate smugglers. Comptrollers have appealed to Companies using heavy duty trucks to carry their manufactured goods from one location to another to take a closer look on their drivers who are using their trucks for illegal activities to avoid playing into Custom’s hands on the road. Most of the trucks, which had been intercepted by the FOU, Zone patrol teams on the road, were said to have carried between 120 and 200  ”50” Kg bags of foreign rice each.

Recall, that last January alone,  the Command , had made  22 seizures of Contrabands with a Duty  Paid Value of about N591 million. Six suspects were said to have to arrested  in connection with the seized items  and are currently being prosecuted in Court by the Command legal Department. He assured genuine importers that they have no reason to worry as the Service  has a mandate to ensure trade facilitation  to boost the economy.

Note that President Muhammadu Buhari had banned the importation of vehicles and foreign parboiled rice through the land border in 2017, to encourage patronage of Island, which has Roro facilities that could handle car imports. The facilities, manned by Five Stars Terminal, the Concessionaire are currently being underutilized. The ban on the importation of foreign rice into the country, Audu Ogbe, the minister of Agriculture and Rural Development said was to protect local rice farmers and to make the country self-sufficient in rice production.

Maritime watchers believe  that seizure of the  frequent seizure of exotic vehicles and thousands of ’50 Kg bags of rice by the FOU, Zone C, on the road , between Benin Tollgate and O , the Imo state Capital, has exposed the in-effectiveness of Comptroller Mohammed Aliyu , of FOU, Zone A, Surveillance , in the , particular, the Ijebu-Ode Checkpoint. They noted that the only time  the anti-smuggling officers of the Command had made spectacular seizure  along the Lagos -Benin Express Way was when  Riks Lura, a Chief Superintendent of was in-charge of the before his elevation to Head the Command Operations and Lagos Roving, Team or if the Strike Force Team, headed by one Superintendent B. Ahmed, the Head of the Strike Force and his boys acting on information  take over  the road to dispossess a suspected smuggler of an exotic vehicle before it falls into FOU, Zone C ,  anti-smugglers  at Benin .