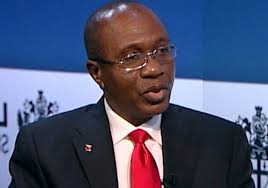 Going by the Banking Act ratified by the World Bank, the tenure of the Governor of Central Bank of Nigeria (CBN) Godwin Emefiele would end in June this year. The CBN governor confirmed this recently in a forum where he stated that his five year tenure would end in June contrary to the rumour peddled that his tenure has ended.

The CBN boss was appointed by former President Goodluck Jonathan as CBN governor in June 2014. The CBN boss assumed office at a period when Nigeria’s economy went into full blown recession which led to the near collapsed of the real sector of the economy.

Infact for the past five years of his tenure, Emefiele has been busy battling with a battered economy and has over the years been seeking several measures to at least stabilise the free fall of Nigeria against foreign currency but to no avail.

He also during his tenure superintended over the implementation of the rather apparently controversial Treasury Single Account, TSA which mandated government agencies to withdraw their accounts in  commercial banks deposit them in a syndicated single account in the apex bank. This rather unpopular policy of the federal government crippled the banks that had relied on the deposits of the agencies to boost their liquidity profile.

Over the years, he has also been joggling with different monetary policies to stem the tide of inflation in Nigeria economy.

He also stunned many economic analysts and manufacturers when he recently said that the inflation rate in Nigeria will continue to rise till the middle of this year.

However, four months into the end of his tenure, Emefiele has given what look a bitter parting give to textile players in Nigeria. The CBN boss recently announced imposition of foreign exchange restriction on importers of foreign exchange materials with immediate effect. He said this measure was aimed at protecting the industry and encouraging the development of the textile industry.

This new CBN  directive has generated mixed feelings among players in the industry. Whereas some players have applauded the initiative which they argue will boost local production, others disagree saying that the decision will be counter- productive because of the harsh economic climate and high cost of doing business in the country which is worsened not only by heavy multiple taxation but epileptic electricity supply.

But the CBN governor has promised to provide finacial succour for cotton producers at single-digit interest rates to ameliorate their high cost of production.

As the CBN governor leaves office, MTN and the banks that were fined for aiding the repatration of the funds of the mobile telecommunication giant to oversee country thereby denying Nigeria of the funds. While many will see him as leaving the economy in a bad shape.

Before his appointment he was the Group Managing Director and Chief Executive Officer of Zenith International Bank.