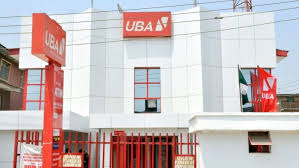 Last Monday, officials of the  United Bank For Africa,  UBA, Foundation, a Foundation established by the Bank, regarded as one of the biggest  and viable  in the  country  to execute it Corporate Social Responsibility both within and outside country has remained focused to its objectives: Education, Empowerment and Environment .

Many believe that there is no much difference between the Foundation objectives and that of the Tony Elumelu Foundation, as it as it has touched the lives of millions of since it took off several years ago.

Only recently, officials of  UBA  and the Foundation an rolled out the drum to join other Corporate Organisations and countries,  in different  parts of the world  to celebrate the International day of the African Child  by carrying the message  of the reading culture to schools.  The one day celebration was capped with a  mentoring session for the students  who were gathered together at the Tony Elumelu Foundation, TEF, Amphitheatre, located  at the Bank Marina Head office Complex.

The International Day of the African Child which  is  a yearly event to celebrate June 16, a day declared by  the United Nations, UN  to honour African students for  their courage to fight for their right to better education in the black township of Soweto, South Africa during the Apartheid era.

Among the schools that were said to have sent  representatives to the UBA Foundation  one day Celebration of the International Day of the African child include  Akande Dahunsi  Memorial High School, Lagos, Government Senior College, Maroko, Aunty Ayo International School Ikoyi and Wahab Folawiyo Senior High School, Ikoyi.

Patrick Aderibigbe, the Bank’s Group Head,  Human Resources, who had  welcomed the students, to the TEF  Ampitheatre  in his address  had outlined the three key pillars of the Foundation: Education, Empowerment and Environment.

He further explained that ”As a pan-African institution, we believe that the future of Africa lies in her youth”. For this reason. The UBA Foundation top Executive may have gladdened the heart of the students when she disclosed that the”  Foundation  is actively involved in facilitating educational projects and bridging the literacy-wide gap on a pan-African scale”.

Given a further insight about, he stressed that  it is currently ”helping to rekindle the dwindling reading and literacy culture amongst African students as they pursue their education.  Note that over the years, the Foundation  had  worked with various schools and educational institutions across the African Continent as part of its Corporate social Responsibility of contributing positively to the development of African child, especially in the area of education , insisting that  its plan in this year’s celebration of the International Day of the African Child is to make ” substantial improvements in the lives of the needy and under-privileged in every part of the African Continent by supporting entrepreneurship programmes, such as social entrepreneurship schemes which is expected to benefit the society at large.

Franklin Erebor, the UBA, Chief Credit officer, may have touched the mindset of the students when he spoke on financial literacy and the need to plan for the futureby stressing the importance for them to” manage their funds and finances”.

“You are not too young to start to plan for the future, as what you do now when you are young will impact greatly on you later in ”, she had said. She urged the students to to have an account in the Bank which should be well monitored to ensure that it fulfills the purpose of operating it.

He also charged the students to be financially literate, as this will help to open to the opportunities inherent help them to make wise decisions to benefit from the investments.

. Ramon Olarewaju Nasir, General Manager, External and Public Relations, who was said to have used his wealth of experience to organise the students together with his team of dedicated have endeared himself to the students who saw  him as a role model and an epitome of humility.

Note that UBA, described as a pan African Bank, by Financial analysts has been in the forefront of promoting Africa and African values, especially in the areas of economic development for the continent.

The UN International Day of the African child celebration which was organised by UBA in Lagos, was said to have been rounded up with the” Bank’s annul Conversations event for commemorating the Africa Day,” where African icons contributed to discussions around changing the African narrative and growing the continent”.