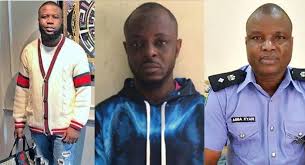 More Troubles for Kyari As DCP Disu Takes His Position

In spite of the fact that Abba Kyari, a Deputy Commissioner of Police, DCP, and Head of the Force Intelligence  Response Team, IRT, described as’’ a Super Cop’’, in security agencies   circles, had said that nobody demanded any  money from Ramon Olorunwa Abass, popular, Hushpuppi,  an International fraudster, to  facilitate the arrest  and detention of  Chibuzor Kelly Vincent,  his former close friend and  cybercrime ally, the  North American county of the United States, US, Federal Bureau of Investigations, FBI,   appears to faulted him.

A  document  that was said to have been issued  by the US District Court for the Central District Court  of California,  on February  12, 21, alleged  that Hushpuppi, had   engaged the services of the DCP. Kyari, for the  sum of $20,600  or N8 million, to arrest Vincent for threatening   to expose  an alleged $1.1 million  fraud committed  against a Qatari business man.

The FBI,  Document , may have shocked many when  it gave out an insider information to show that Kyari who has been claiming innocent of not receiving a dine from the International fraudster actually provided   the  information  of  the  Zenith Bank account in Nigeria, in the name of  a, undisclosed person, age 59 other  than, Kyari himself,  as shown in the item 45, of the document where the money was  paid into .  Andrew John Innocenti, the US, FBI, agent, who was said to have made the allegation in the Criminal Complaint  by Telephone  and other Electronic Means filed  before the   US, District Court for the Central District of California Court.

Giving an insider information of the circumstances that was said to have to have led to the $20,600 payment to  Kyari, the document   had stated that in January   16, 2020,  Hushpuppi, sent a message   to the Borno state born senior Police officer  on Whasapp, and also placed five calls   to another phone  number +234 806073388 that was listed as Abba Kyari.  The call records showed that the last three of the calls were answered and that one of the calls lasted two minutes.

The Document noted that shortly after the Conversation between the duo, Kyari sent a message to Hushpuppi which was said to have been   received, and to reconfirm their plan to pick up Vincent on the agreed date or the next day.  In response, the embattled DCP,was  sad to have promised to ‘’to take care of the Team also after they had   picked up  his estranged friend’’.  Kyari was said to have answered in the affirmative as published by the Punch Newspapers, of Monday, August 2, 2021, based on the FBI, Document: Yes ooo .

The document  had averred that based on the discussion between  the duo on phone,  the later as described in  paragraphs  143  to 145 of the Document  had planned ‘’ to pay the  Nigerian Police officers who had  participated  in arresting Vincent,  his Co-conspirator for their service.

The US District Court  Document, had alleged that this  is not the only time that  Hushpuppi,  has arranged  payments for his Team  with Kyari. On May 20, 2020, he was said to have sent  Kyari  receipts   for two transactions  from accounts at   Guarantee Trust Bank, Popular, GTB and Zenith of a person   that he knew  in the United Arab Emirate, UAE. The person in question was said to have been arrested   with him   in his Apartment at  UAE, by the Dubai police on June 9, 2020- to the accounts  of another person in Nigeria.

The amount  in the two transaction receipts , the Document shows totalled  N8 million, equivalent of $20,600, based on public available exchange rate  Information . The FBI, Document, may have given further insight on Hushpuppi and Kyari, in the plot to arrest Vincent that may have nailed the later.

It noted that  in‘’attempting to reason  with Hushpuppi In January 18, 2020, Vincent who had fallen out with him, had  recounted  the assistance he  had provided  in’’ the scheme to vicimise  the victim businessperson, including creating the power of Attorney  and facilitating creation   of  telephone Banking  number and fake  Wells  Fargo website’’.

The FBI Document had revealed that  on January 20, 2020, , the Nigerian  DCP had  sent to Hushpuppi, a Biographical , identifying information of Vincent , along with his photograph when he was arrested. This may have gladdened the heart of Hushpuppi, who was said to have confirmed in their Conversation immediately: ‘’that is him, Sir’’.   Kyari was said have boasted,‘’We have arrested the guy.  He is in my Cell now’’.  The embattled DCP, was said to have sent   the  Vincent Biographical information   and photograph  to Huspuppi, using  two different whatsapp numbers, the second of which , Kyari was said to be his private number.

The  FBI Document,  revealed that from that moment Hushpuppi got wind that his closest rival, Vincent has been arrested by Kyari’s Team members,,   the duo were said to have  discussed his arrest and detention  through whasapp in Kyari’s private number  on a daily basis.

Hushpuppi,  may have wanted Kyari to see him as’’  a big boy’’,  in the class of Atiku Abubakar, a former Nigerian Vice President and Presidential Candidate  of the Opposition People’s Democratic Party, PDP, in the 2019, general elections  Bukola Saraki, a former governor of Kwara state and one time Nigeria Senate President and Dino Melaye, a  Senator of Federal Republic   and who have  posed in photographs with him  and other Celebrities like Davido, aNigerian Musician.

Hushpuppi, may have shown his hatred for Vincent, when he gave a matching order to DCP Kyari to thoroughly give him the beating of his life for daring him but he was said to have laughed over it but Hushpuppi, insits that he must be seriously beaten to teach him a bitter lesson.

He may have suspected something fishy as he was said to have demanded to know the actual offence committed by Vincent that should warrant  beating him while in their Custody. He was said to have sent him   the details of what he did in an audio to listen and decide on what to do.

Here him:  I have a job  that should have fetched me $575, 000,lamenting in the audio message that Vincent  went ahead  to expose i   because  ‘’I told him    to help   and take  one of the documents to the person that will  give the job to me’’.  I gave him the details of the job, he said.

His anger may have been informed by the fact  that  Vincent gave out the information on the job  at his back   to divert the money. It is not surprising why  he told Kyari that he will spend  money to send  Vincent to  jail for a long time. He was said to have repeatedly said it to the hearing of the Nigerian DCP, during their discussion, ‘’Please sir, I want to spend money  to send this  boy to jail  , let him go for a very long time’’.

He was said to have promised  Hushpuppi, that  he will discuss the matter with his Team members who had arrested him. An elated  Hushpuppi, was said to have asked Kyari, how he can send money to them. ‘’I will send their accounts details to you, he was said to have promised. True to his words. six minutes later, according to FBI, Document,  he sent the Team members who had  arrested Vincent account details  in Zenith Bank to him, in  the name of a front, other than him to transfer the money. The FBI, Document confirmed that Hushpuppi transfered the money to the Zenith Bank given to him by the suspended DCP Kyari but that was how far it could go.

Usman Alkali Baba, the Inspector General of Police, IGP, may have sent a message To suspended Kyari, to stop dreaming of coming back to the service to Head the IRT, as he was said to have    replaced him with DCP Tunji Disu, a former Commander  of the Rapid Response Squad in Lagos state. This may have proved to him that he is not indispensable and that  all that talks that his records in the last two decades in the service  in fighting crime will speak for him will not count when it comes to  enforcing disciplinary action in the Force.  He is expected to injected fresh hands into the Team to give a bite in order to put behind it the bad experience of the Kyari era  which had made the Nigeria Police Force, NPF, a laughing stock in the  Internationa l Community because  of the pecuniary interest of Kyari, the suspended former Head of the IRT.