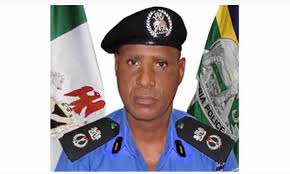 Between Saturday, April 4, 2019 and Wednesday April 10, 2019,, Zubairu Mua’azu, Lagos state Commissioner of Police , and his anti- Kidnapping officers have been on the trail of the kidnappers  who abducted Rasaki  Musibau, Director , Lagos state, Fire Service, LSFS,  the and six other  people  in the Ejeirin  area of Ikosi -Ejirin  Local Council Development Area of the state.

Musibau and the other victims were abducted  on Saturday, April 4, 2019 at Ketu-Ereyun, Ikorodu. The  abduction of  the Director of the LSFS,  and the six others , threw  a big challenge to Mu’azu , the Police Commissioner,  anti-kidnapping strategies, the state  to rescue the victms  without loss of life .   Going by the information making the rounds that  the feeling  abductors  might not have gone outside the state, the tough talking  Lagos state Police Commissioner was said to have deployed  the Command  Tactical teams: Special anti-robbery Squad, SARS,  Anti-Kidnapping and Anti-Cultism personnel   to the Creeks and forest in the area to comb for the  kidnappers and rescue the victims. Others were said to have mounted roadblocks in major Expressway across the state.

The kidnappers may have  thought  that they would make good money from the  kidnapped persons, particular Musibau, the Director, LSFS.  They were said to have demanded  for a n3 million  ransomed from his  family to facilitate his release.  The police were said to have played along  while they closed in on them.

The Lagos Police boss may have sent a signal to the Musibau  and the other six Lagosians abductors,  that he would use their operation  as a test case to show that Kidnappers have no place  in Lagos.  True to his words ,two  members of the kidnap gang    were arrested  , according to Bala Elkana, a Deputy Superintendent  of Police and the Spokes Person of the Lagos state Police Command , ” following a sustained and Coordinated operations at  Ibafun along Ikorodu- Ijebu-Ode  Expressway, a boundary   Community   between Lagos and Ogun state as they were  heading to their alleged  hideout  outside the  state,  on Wednesday, April 10, 2019.

The suspects   may have fallen into the waiting hands of the  Command’s  Anti-Kidnapping team led  by Superintendent  Bulus  .R. Musa and his team members  , who were  said to have   mounted major  road block along the  Ikorodu-Ijebu Expressway.  The anti-kidnapping team may have mounted the road block in the area based on the  credible information that the  kidnappers have no other route of escapee from the sate other than  the major  road, which is a link between the two states.

Given an insider information, Elkana, said the arrested suspects,  Blessing Bayo, 23 and  Smart Alfred, 32, years  were indigenes of Arogbo, Ondo state, an indication that they may be  heading  to their locality to hide their victims , and start negotiation with their family members.

The duo who were caught with  two single   barrel guns    were said to have confessed to the Police  during interrogation   of committing the crime. An elated Mua’zu, the Lagos state Police boss ,  is optimistic that the other fleeing members of the kidnap gang would be arrested. His optimism is based on the  fact that   the two arrested suspects are already helping the police in their investigation to arrest the other members of the kidnap gang on the run.

Indeed, the arrest of the two members of the Ondo  ate born Kidnappers , was a clear indication that Mu’azu and his officers  are out to burst  high profile crimes, such as kidnapping in Lagos state.  The Lagos state police boss, according to securiyt experts , said  has set a record which Commissioners of Police in other states of the Federation may have to beat: Rescuing seven Kidnapped persons in  within  an interval of six days, without  exchange of bullet with the kidnappers.  This is where Mohammed Abubakar Adamu, acting Inspector General of Police, may have  compensate the officers involved in the rescue operation to encourage  other officers to do more  in fight against crimes in the society.