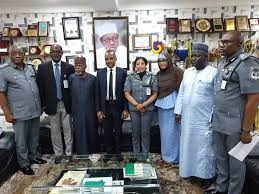 Recall that on assumption of duties on March 10, 2020, Jamoh, the NIMASA, DirectGeneral, had taken the first few months in office to reach out to the Counterparts in the NCS, Nigerian Police Force, NPF, Nigerian Immigration Service, Nigerian Navy, and Nigerian National Petroleum Corporation,NNPC, as a way to enhance their Collaboration and protect Nigerian maritime domain.

Jamoh, the NIMASA, Chief executive Officer, CEO, may have taken advantage of the close working relationship between him and the Customs Comptroller General, to ensure that the remaining $195 million security assets that that had delivered by the HLS Systems and Technologies Limited, an Israeli security firm, which are still at the Lagos ports and portHarcourt Area II, Onne, Rivers state, are cleared with ease, without ant Customs bottlenecks.

Perhaps, to ensure the Customs Area Comptrollers at the seaports where securitime security assets had landed did not do anything to frustrate the agents contracted to clear the Consignments, may have informed why the Leadership of two government agencies had agreed on ‘‘the modalities for the seamless and timely delivery of the Deep Blue Project assets currently trapped at the seaports. The agreement was said to have been reached by the duo at a meeting in Abuja, the Federal Capital Territory, FCT, on Thursday,(today) October7, 2021.

An elated Ali, the CG of Customs, had said that “because of the peculiarities of the urgent need of the Deep Blue Project assets, ‘‘there is a need to find a common ground that would assist in the full deployment of these assets”.

Jamoh, the NIMASA, boss, may have known that he needed the support of his Counterpart in the NCS, to facilitate the clearing process of the remaining maritime assets at the Nigerian ports for deployment into Nigerian waters and the Gulf of Guinea,  unhindered.

There are fears in both official and unofficial circles, that both not for the duo reaching a deal, at their Thursday, October 7, 2021, meeting, there are chances, that the Area Comptrollers at the seaports, where maritime assets had Landed belong to another government agency to slam outrageous duty on it  which might delay the delivery process at the port.

Ali, the Customs boss, who could not hide his feelings at the Thursday meeting had said that it was necessary ’’to find a common ground that would assist in the full deployment of the maritime security assets into Nigerian waters and the Gulf of Guinea.

While appreciating the Customs Comptroller General for the efforts to clear the Deep Blue Project assets still at the ports, Jamoh urged the Customs Authorities ‘’to share information and capacity with the Agency to ensure successful implementation of the D Project’’.

He was said to have also raised the issue of the N50 billion Modular Floating Dock, which he had described as a public asset to be managed by the Infrastructure Concession and Regulatory Commission, ICRC.

Given an insider information on the ICRC, involvement, in the management of the Floating dockyard, he revealed that the agency is involved in the process to select a management partner for the Modular Floating Dockyard.  This may have informed why he has urged the Customs Authorities, ‘‘to see and treat the asset as a national asset that should enjoy some concession in terms of duties.”

He is optimistic that when the Floating dock fully become operational ‘‘hundreds of direct jobs will be created and thousands of indirect employment will also be created’’ as the nation generates N1 billion monthly or N12 billion annually by the time it would start operations.