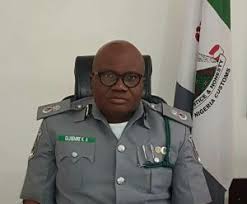 It was not unexpected that Kayode Olusemire, Comptroller, Federal Operations Unit, FOU, Zone C, and his Patrol Team Leaders  had  taken advantage of the outbreak of the Wuhan Town in Hebei Province of the Asian country of China emerged Coronavirus  to fill all the government Warehouses in the south –south and south east geo-political regions with Contraband worth millions of naira.

This is also the situations at the seaports, particular, Tin can Island Command, where  Musa Baba Abdullahi, popular, MBA, popular, MBA, was said to have initiated bold  policy measures that had dramatically improved the revenue generation of the Command  in the month of March that had become  the talks in Maritime circles.

The situation at FOU, Zone C, Owerri, appears very surprising as all the Government Warehouse premises in Benin, Edo state Capital, Enugu, Owerri to Calabar, were said to have been occupied with intercepted vehicles, trucks and Containers while the main  warehouse buildings  are filled up with impounded food items, particular, the Asian country of Thailand  parboiled rice, Vegetable  Oil and other  items worth millions of naira,  despite the social distancing of officers in dealing with smugglers as directed by the World Health Organisation, WHO, a health agency of the United Nations, UN.

Bonnface Anniebonam, founder, National Association of Government Approved Freight Forwarders, at one of his interactive sessions with Maritime Journalists  at NAGAFF village in Lagos, had made reference to the Contraband seizures that dotted the nooks and corners of  the Government Warehouse at Benin, an indication that Olusemire and his boys are doing their work.

Insider told  the Value  News shows that the FOU, Zone C, Customs Comptroller, had restrategised on  how to deal decisively with the unrepentant smugglers   when  the Customs   Authorities released circular  from the World Customs Organisation, WCO, Headquarters, at Brussels, Belgium, about the outbreak of the COVID 19,  and the need to maintain social distancing  in dealing with port users and smugglers.

The Customs Area comptroller was said to have begaun with a sensitisation Campaigns to acquaint the officers and men of the Command  about  the deadly disease and the need to maintain the social distancing policy regulation of the WHO in the discharge of their duties. He was said to have also visited  the outstation officers from his Owerri base and  also addressed the officers at their various  checkpoints in the states as a way of encouraging them to be  alive to their duties. This  may have forced the officers to intensify their anti-smuggling Operations in the two regions to ensure that nothing enters or leaves  th country.

Indeed, the tightened up security mounted by the officers at the various checkpoints at the areas within the Command’s jurisdiction in Edo, Delta, Rivers, Cross River and the south eastern states of Enugu, Abia , Imo and Eboyi and the activities of the Patrol Teams were said to have frustrated  the smugglers who had never expected the FOU, Zone C, anti-smuggling officers  of being on the road or   maintaining a presence at the Checkpoints to lose their cargoes .

. This may have informed why  smugglers who had escaped the eagle eyes of Usman Yahaya, acting Comptroller, FOU, Zone A,  Adba Kakudi, Coordinator, Comptroller General of Customs, CGC, Strike Force, and the Border  Drill sector 1, Lagos Zonal office, patrol Teams officers, had fallen into the waiting hands  of the FOU, Zone C Patrol Team officers or those at the checkpoints .

A reliable source  told The Magazine  that there had been an intense  Competition between the Checking point officers and patrol Teams along the  Benin-Ondo axis, Benin – warri, Benin – Asaba  link road , Ikom and Bakasi  axisis in Cross River state to make Contraband seizures. An elated  Olusemire  was said to have told a close associate: we have  many Contraband seizures ranging from vehicles, Foreign rice, vegetable oil to second Handing clothing among others.

Some other intercepted vehicles from various locations in the regions  were said to have been   smuggled into the country from Benin Republic. Many believe that FOU Zone C, under the close watch of Olusemire could  achieve that much  since the first index case of the sickness in the country last February  because he had put a Crack Team of  anti-smuggling officers at the various Checkpoints across the  two southern Nigerian regions.

This is evident going by the random scrutiny of vehicle approaching  the  Benin Toll gate  on a daily basis.  Vehicle  Importers with their agents  agents   who were ssaid to have   abandoned the Lagos –Benin Express way  road of going to the south east  but opt to go through the Ondo, Benue – Eboyi axis, were said to have fallen  into the waiting hands of Olusemire  anti-smuggling Patrol Team. It is not surprising  why Maritime analysts had described the south –south and south east geo-political regions  as a no go area for smugglers because of the tight security  mounted by Olusemire and his Patrol Team officers.

While FOU Zone C, AArea Comptroller, appears to be happy with the millions of naira of Contraband seizures that had been made by the Command in the last one month, his counterpart at Tin Can Island  Command, Abdullahi,  who Maritime  analysts, initially, feared, could not make any appreciable impact in his monthly revenue collections because of the drop in the volume of cargoes coming  into the Tin can island port, owing to the pandemic may have proved pundits wrong.

.From the onset, the Tin can Island Customs Comptroller, was said to  have  told those that cares to listen that the COVID 19, would not have any adverse  effect  on the revenue collection of the Command, notwithstanding the fact that not much  cargo are  coming into the port either from China or any other part of the  world because of the disease.

He has his reason.Note that Between December 31, 2019, when the novel disease  was first reported to the WHO, by the Chinese Authorities, many international Shipping Lines, including Maersk line, had abandoned  going to  China  to lift cargoes to any part of the world including Nigeria  for fear of their Crew members contacting the deadly   disease.

The Tin Can Island Area Comptroller was said to have created a road map for  actualisation of the Command revenue target of N540 billion   for 2020  based on a  monthly target  of N47.4 billion which it had set for itself. The original target set for  the command by the Headquarters was N504 billion for this fiscal year.

Recall that President Muhammadu Buhari, based on the performance  of the service last year in its revenue collection had set a N2 trillion target  for the  revenue generating agency this year. The Katsina state born Nigerian President may  have  set the target  without taking into Consideration the outbreak of the COVID 19, in Wuhan China, last December.

Take for instance, Tin can Island, Command, which Uche Ejieseme, a   Superintendent of Customs and the Command Spokesperson  had said   generated about  N32 billion in March , 2020. Within the same period last year, the Command had paid into the Federation Account about N26 billion.

The  Command  may  have collected that much  in the month of March because  of  the strategy adopted by the Areea a Comptroller and his Management Team: mobilization of critical stakeholders through series of roundtables and Consultations.

Until his redeployment to Onne seaport, Mamood Ibrahim, a Deputy Comptroller and the Command Head of Compliance Unit had set up a structure that had made the importers with their agents to be Compliant  in their import declaration s before making their e-payments which reduces contact with the officers.

Those who were said to have  defaulted in making the correct import duties were said to have been issued Demand Notice, DN, which most  importers had described as outrageous but had no option but to pay it.  Abdullahi, the Command Area Comptroller, was said to have  ensured  that the DC Ibrahim’s Legacy was sustained  to maintain the high revenue profile of the Command irrespective of the COVID 19.

Joseph Attah, a Deputy Comptroller, and the   Customs Spokesperson, may have spoken the mind of the Customs Comptroller General when he responded to a question posed to him by the Magazine about the hopes of meeting the N2 trillion  target set for it by the government this year: We are not talking about revenue now. You know the major issue on ground: COVID 19, which is what the Management is much  concerned  about to ensure that officers are saved from it.

UBA: Experts Advocate Collaborations between Government And the Private Sector To Develop The African Continent

Why NDDC Is An Agency OfBogus And Abandoned Projects

Chinese Medical Experts: CECC Clears The Air On Their Invitation To Nigeria

Maritime: Amaechi Inaugurates NIMASA And NPA Board Members With A Mandate To Start Work Immediately