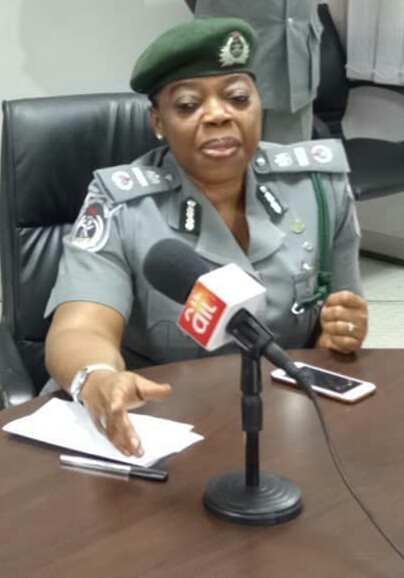 Boniface Aniebonan, a retired  senior Customs  officer and  founder, National Association of Government Approved Freight NAGAFF to have found a way  of dragging   top Customs officials to the Association Secretariat, NAGAFF Village at Apapa, Lagos,  to shed light on government fiscal policies and matters  that border on ease of doing business in the country.  Last three years, Hameed Ali, a retired Army Colonel and Comptroller General, Nigerian Customs Service, NCS, was at the NAGAFF, when imports having difficulty in opening Form,  and the Pre-Arrival Assessment  Report, PAAR. It was some importers to seven months to open Form alone. The problem was said to have been brought to the of the Customs Comptroller General who quickly to simplify the process for importers.

The latest to visit the NAGAFF Village was KC. Ekekezie, an Assistant Comptroller General ,ACG, and Coordinator, Nigerian Customs Service, NCS, Zone A, Lagos on Thursday, June 14, 2019. Accompanied by top Customs  officials from the Zonal Headquarters including Mohammed Aliyu, Comptroller, Federal Operations Unit, FOU, Zone A, who she calls  ”double-double”, , because of his  aggressive anti-smuggling drive  in the south-west geo-political region.

The meeting ample opportunity, for the agents to speak out their problems encountered at delivery of their cargoes, at the seaports, particular, Tin-can Island ort. Mercy Ebere Ojeogwu, Chief Executive Officer, CEO,  Ebby Integrated Logistics Services Limited and  Mercy From Above Nigeria limited, may have opened the other agents to follow in her fot she lambasted  Abdullahi Musa, Comptroller Tin-can Island Command, multiple the same Commodity at the port.

Ojeogwu, had exposed to the hearing of the Zonal Coordinator, that there were  multiple alerts at the port on suspected Containers. At the last count, she had named nine of such multiple alerts coming from the Command alone. Given an insider information, Ebby Integrated Logistics Services and Mercy From Above,CEO, had cited the CAC and Compliant Unit alert, Enforcement Alert,   Admin  Alert, Valuation alert , to name but a few. This is in addition to the Headquarters alert, which the renowned freight  forwarder said  has not really helped trade facilitation  in the country.

Musa, the Tin-can Island  Area Comptroller  who, was not at the meeting to defend his Command on the multiple alerts  being complained about the agents,  as he was away  to Abuja , on  official engagement. Aba Kura, his counterpart wh also faced the agents sharp tongue  was not at the  meeting.

In apparent reaction to the multiple alerts, Aliyu,  the FOU, Zone A, Area, Comptroller, who could not find it funny, described it s unnecessary, noting that one alert was  enough for all the Units  where such  alerts  emanate  to take the opportunity to carry out   100 percent examination on the Consignment  at the same time instead of issuing different alerts  still on the same Consignment.

The Tin-can Island Deputy Comptroller  may have been forced to speak out when he disclosed  that most of the frauds that had been traced to some agencies had been committed by their Staff who use their passwords. He urged  CEO, of Freight Forwarding Companies,  to  ensure that they  change the  password given to them while collecting their license or renewing their operating license at the Customs Headquarters  to ensure that their  passwords were not faked to do bad jobs. More worrisome, was the  accusation , that most of the Freight Forwarders  who were issued  operating license  to clear imports have commercialised  it to third parties  who uses it to do bad jobs.

An elated  Ekekezie,  who could not hide his feelings described the  NAGAFF forum as a ”veritable platform  for NCS and members of the Association  to come together  to rub minds , share ideas and learn from one another  with the aim of achieving a better business environment for the overall growth and development  of the Freight Forwarding business and the Nigerian economy in general”.

She noted that  ”it is the pivotal role  played by freight Forwarders  in the  importation of  and release of  goods that   has made it a ”key Organisation to consider  when matters  that border  on the ease of doing business  at Nigerian  seaports, airports and land Borders  are being discussed”.

According to her, ”as an economy, all business of Freight seamless  ahead in place by the government. she said,  was the fact that the ” processes and procedures of doing business in the country , particular Apapa,  being pilot project port has been streamlined”. This is evident going  by the reduction in  number of security agencies at the ports.

There is no gain saying the fact that  during  the  third  Regulatory Conversion (RC3.0), of the Presidential Business Environment Council,  PEBEC, launched  on March 14, 2019, the government  has made it clear that  its intention is to ensure  that ”all entry and exit points for goods and services are user friendly”. This may have led to the improved revenue generations at the ports and land Borders in the recent time.

She attributed it to the fact  that many  Customs Brokers have aligned  with the  reform policies  of the  present management   through  ” honest declarations”, which maritime analysts believe was  fuelled  by the full automation  of all Customs processes .   She also confirmed   that there have  been a continued  rise  of the daily revenue generations of the service .

Recall that  Ali, the Comptroller General, had t  service now  N5 billion which is a generated from the seaports, airports and land Border stations.  Ekekezie, also  re-echoed   during the  NAGAFF organised interactive session at its Secretariat in  Lagos that Customs daily has risen to about N6 She opined that the not looked ”it hit its first  December 31, 2017,  as it has tempo.

She is optimistic that  with importers and their agents  ”due Compliance to import and export regulations, processes and procedures, proper documentation  and correct description of  items imported  and exported for Customs purposes, the  service daily  revenue generation will  further  go up.

Appealing to Freight Forwarders and the public not to  see Customs  personnel  as enemies,  the ACG, disclosed that   the Enforcement   Units at the Commands   are now  well equipped  to protect lives and properties and ensure compliance but frowned at a situation where  Abubakar Adamu, the Inspector General of Policemen, IGP, on the road  are gradually taking over  Customs job.

Critics saw it as an opportunity to drag  Customs to the people’s Court by alleging  that the victim was shot  because  he refused to part with N5,000.00 demanded by the Customs officers at the checking point.   Aliyu , the FOU, Zone A, Area Comptroller, whose patrol team, were linked to the killing of the Camp boy  has a word of advice to the public: that the Customs officers  do not just  stop vehicles on the road without information.

He cited the bus that was flagged down at Shagamu which led to the accidental discharge, noting that one of the in the bus which was searched contained sachets of tramadol. He urged the Public to Cooperate with the Customs personnel on legal duty on the road instead of stop when flagged down  to avoid confrontation and subsequent accidental discharge of bullet that might lead to loss of life.