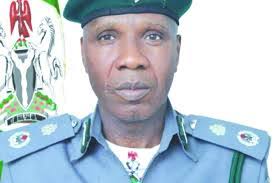 He was said to have sought the approval of Hajia Zainab Ahmed ,the minister of Finance, Budget and National Panning and Chairman , NCS Board, who gave him the nod to fill the vacuums, pending when the board would meet to confirm their e appointment.

The two Assistant Comptroller Generals that were said to have been elevated to  the  DCG, rank, were Abdullahi Babani and Mohammed Boyi.  Babani , was appointed as the Deputy Comptroller  in-charge of the service  Human Resources Development, HRD,  while Boyi, was appointed the  Head  , NCS, TRADC.

The five Comptrollers, who wer eelevated ACGs , though in acting Capacity were Saidu Galadima,  who was put in-charge of the service  Information, Communication, and Technology,ICT  and Modernisation,  SM. Modibbo , For Zone B, Customs Headquarters,  Hamza Gummi, Trade & Tariff,, Usman Dankigari, Doctrine and Dvelopment and  Muhammed Uba Garba, a former Zonal Coordinator, Border drill sector 3, who was  appointed ACG, Enforcement, Inspection and Investigation, E.I/I .Some officers who spoke to The Value News had described the new appoints  in to the Management as skewed in favour of the north.

But one appoint which had continued to draw applaud  from the Ali, the Comptroller  General was the appointment of Muhammed, as the  ACG, EII, described in Customs circles  as a well-deserved  because of his sterling performance at the  Federal Operations Unit , FOU, Zone C, Owerri, Imo state, Zone A, Ikeja , Lagos, Seme Command  and Border Drills sector 3.  At all the Commands, he was said to have headed, he was said to have  disintinguished himself as an Enforcement guru, who knows the job.

Take for instance, at the  FOUC, Zone A, he was said to have exposed the rot  at the  Lagos seaports, by making massive seizures of  exotic vehicles along the Lagos – Benin City road  and other major roads in the south east and south- south geo-political regions which were aid to have been   grossly undervalued

. Some of the intercepted Executive  vehicles were said to have attracted additional duty payment of about N10 million each after  the valuation officers had revalued  it by getting the actual  ex-factory price.  The Command was said to have made millions from such  exotic vehicles.

Between 2015 and 2017, he was said to have  made life uncomfortable for the fraudulent  importers with their agents  and  Foreign rice smugglers within its areas of Jurisdiction in the south east.

His arrow head in the anti-smuggling operations at the FOU, Zone C,   Riks Lura, was said to have never  had a moment of rest  with his Team , as they  went after the fraudulent importers with their agents and the Foreign rice smugglers  making incredible seizures of banned Pharmarceutical drugs like Codeine and other fake drugs.

The seizure of 55 sacks of  Pangolin shell, weighing about 200Kg worth  about N408.32 million in 2018  speaks volume. The Riks led Patrol Team were said to have also boosted the anti-smuggling efforts of the Command with the seizure of 18 pieces of Elephant Tusks worth about N85.16 million. The Items were said to have been evacuated in a residential  building  at the Opebi axis of Ikeja occupied by Chinese.

The seized Elephant Tusks were said to have been  prepared for export by the Chinese buyers until the information leaked out. The FOU, Zone A, which was   under the close watch of Muhammed, now an ACG, EII, was said to have also seized Pangolin scales worth about N2.01 billion based on credible Intelligence. The seizure of the Pangoline Shells, Scales and Elephant Tusks , was said to have attracted Jubrin, a one time minister of state, ministry of Environment to the Command in 2018.

Perhaps, what may have  raised the profile of the Customs ACG, when he was a Comptroller at FOU, Zone A,  was the frequent interception of Executive vehicles including bullet proof.   Some of the intercepted Executive Vehicles which fell into the waiting hands of the  Muhammed’s  boys  were said to have been  smuggled into the country  or released from the Lagos ports of Tin Can Island and PTML, without appropriate duty  payment.  The Market value of one of the intercepted and detained vehicles, G .agon was put at about N100 million.

Foreign par boiled rice smugglers in the south west , according to insider sources , never had a breathing  space during the Customs Comptroller tenure  tenure at FOU, Zone A.  The Ikeja Government warehouse, are always filled up to the brim , with intercepted  thousands  bags of ‘’50’’  Foreign par boiled rice. With the support of the Cthen FOU, Zine A, Comptroller, now ACG, Riks and his  Team members were said to have laid an ambush  in a warehouse at Sango Ottah, were thousands of smuggled Foreign par boiled rice were stored were evacuated.  With Credible Intelligence, the  Team were also said to have  raided a whare House  at Abeokuta, Capaital of Ogun state, and evacuated about  4,000 bags of’’50’’ each to the Ikeja Government Whare House.

The FOU, Zone A , which was under the close watch of the then Customs Comptroller, was said to have extended its anti-smuggling to the Oyo axis where in one operations at Ogbomosho, it was said to have made some trucks seizure of rice amidst hostility of the people.  Riks , who was said to have led the operations may have prepared for it as he refused to be frustrated by the hoodlums who were armed with dangerous weapons  and mounted road blocks and not ready to leav the scenee.  But Riks and his boys , were said to have succeeded in dispersing the angry youths  to find their way to the Command premises with the seized bags of rice.

This is  one operation in the Command that was said to have rattled  the then Customs Comptroller of the FOU, Zone A, as he was shuttling between his office and the road to know when the officers that went for the operation would return. His mind may have come to rest  when  he received  a call from, Riks, the Team Leader not to  worry that the situation is under control. He was said to have left the office  at about 11 pm, given the assurance from the Team.

His redeployment to  Seme Command may have brought  Tears to the fraudulent importers with their Agents and their Customs Collaborators. Attempts by the Agents, particular, to penetrate him were said to have  proved him proved abortive as he insists that the right thing must be done.

The Cross –border importers with their Agents were getting frustrated until the government closed the border  with the neighbouring countries of Benin Republic, Niger and the Central African country of Benin Republic.

The Border closure was said to have trapped hundreds of trucks ladden goods at both sides of the Seme, a border Community  between Nigeria and Benin. While at Seme, Muhammed  was said to have beamed his search light at the filling stations within the Border axisis , that it became difficult  for the dealers  to engage in Premium Motor Spirit, PMS, popular, Petrol bunkering and  smuggling through the Creeks. He was said to have closed down scores of filling stations along the Owode  axisis for contravening the government fiscal policy.

The Customs Comptroller and his boys were also said to have equally  made life very miserable for the Foreign rice and vehicle smugglers at the Border Area. It was not surprising why the Government Ware House at the Seme Border Community are always filled up with  Contraband  including  rice as intercepted and detained vehicles litter the premises.

The Customs Comptroller general  may have known that he needed  a tough Comptroller , with experience in anti-smuggling operations, to be deployed to the Border Drills sector 3, Ilorin, Kwara state,  overseeing the Border states of Kwara, Niger, Kogi and Benue, when , the position  became vacant following  the removal of the Coordinator, ACG Dahiru, now dismissed from the  Service.

Muhammed , appearance in the Ilorin , the operational base of the Border Drill sector 3, may have sent a signal to the petrol and Foreign rice smugglers in the region that it was no longer  going to be business  as usual.

Between May and June, 2020, alone, for instance,  the Border Drilsl sector 3 which was  under the close watch of Muhammed , was said to have recorded  massive seizures of Contraband, with a Duty Paid Value, DPV, of about N 1 billion

. The Contraband that were said   to have been intercepted by the Joint Border Drilsl included 17,216 bags of 50 Kg each , bags of rice, 294 kegs of vegetable oil, 944 drums of Automotive Oil, popular, diesel, 2,321  Jerrycans of petrol,350 bundles of textile materials, 28 bags of Foreign Fertilizer, 66 cartons of Foreign beer, 50 units of vehicles,  75 motorcycles, and 15  sacks of used shoes.

The  thentough acting Coordinator of the Joint Border Drillssector 3, were said to have made 64 arrests of suspects, an indication that he was working  in tandem  with the vision  of Ali, the Customs Comptroller General ‘’to curb illicit trade in all its ramifications’’ in the country.

Giving his warnings  to smugglers sabotaging the eeconomy  as Area Comptroller and acting Border Drills Coordinator, sector 3,  many believe that the smugglers would suffer more loses, as he  will leave no stone unturned  as ACG EII,  in ensuring that the anti-smuggling Commands and ad-hoc Teams,  make more seizures of Contraband across the country and arresting the smugglers who would be made to face the  wrath of the Law.

Note that Muhammed  has a believe  that the local industries  and the entire economy must be protected from the economic saboteurs. It is  not surprising why he has not given a breather to the Fraudulent importers  with their agents and smugglers operating within the Jurisdiction  in all the Command he had headed in the last five years as Area Comptroller in the Border Drill sector 3.