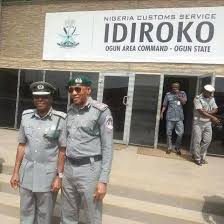 Comptroller Dera Nnadi, a former, Deputy Comptroller of Ogun I, and now the Command Area Controller, in the former President Olusegun Obasanjo, home state, has a big  task at hand: how to prevent smuggling activities and attack on officers, at Ilaro, Obafemi Owode, Ipokia, Ayetoro and other border Communities, in the Idiroko  axis.

Although, the coast may appear clear for him to operate having served under the immediate past Management team  led by Comptroller Peter Kolo, who was said to have proceeded on his three months pre-retirement Leave but he still has much to do to make the hoodlums understand that it is no longer going to be  business as usual.

Many believe that the smugglers operating in the idiroko axis may not have had cause to worry that Nnadi who had not been been involved in the day to day planning and execution of the anti-smuggling operations of the command that  covered the over 140 approved and illegal border routes in the state has taken over instead of Adebayo, the then Deputy Comptroller Enforcement who was promoted  to the enviable rank of Comptroller, which concided with his retirement age.

Oba Kehinde Adewole, the Olu of Ilaro, may have presented a gory image of the situation in Ogun state when he told Kehinde Hussain Ejibunu, acting Comptroller, FOU, Zone A, who was said to have accompanied him by Peter Kolo, the former Ogun I, Comptroller, to the border Communities, in the south west state, last August, on a familiarization visit to the Monarchs and Chiefs in the state.

The Yewaland  monarch had told the Customs Comptrollers, who had waged unrelentless anti-smuggling war against the smugglers in the state that ‘‘there is no established borders between Nigeria and Benin Republic in  the state’’, noting that’’ the borders between the two countries are porous’’.  This confirms what Michael Agbara, a one-time Comptroller of the Ogun I, Command had said that there are too many illegal border routes, in the state which officials of the Nigerian Immigration Service, NIS, had put at over a hundred in the state.

It is not surprising that despite the v effort the various Patrol teams of the Federal Operations Unit, Unit, FOU, Zone1, Ikeja ,Lagos, Border Drills, Zone I, and Headquarters, Strike Force, Team A,  under past and present Cordinator, Ahmadu Shuaibu, a Deputy Comptroller, to Compliment the Command anti-smuggling operations of the Command to forestall  the smugglers from carrying out their nefarious activities not much appear to have been achieved over the years, as the service have continued to be at the loosing end.

There is no gain saying the fact that the die- hard smugglers, operating between the two West African countries Benin and Nigeria,, have continued to smuggle foreign par boiled rice and other Contraband, including vehicles shipped to the Autonomous portof Benin, Cotonou and Bollore port, the two major ports in the country into the Nigerian markets.

The Statement  by Oba Adewole, the Olu of Ilaro, that Hameed Ali, a retired  Army Colonel and Comptroller General, Nigeria Customs Service, NCS, should not expect a hundred percent  Compliance  by residents of the border Communities in the state ‘’to stop smuggling  , when the country’s porous borders where the officers are stationed   are working under strenuous conditions’’ , bear eloquent testimony  o the fact that smuggling would never  cease in the state.

The Ogun state First Class Traditional Ruler Statement should strengthen Comptroller Nnadi, the Ogun I, to rejig the Command Patrol  teams and make  other necessary changes  that would bring fear to the smugglers  that they would  find it difficult to approach any of the new team leaders for any deal but follow strictly his instructions to ensure that no Contraband  enters or leaves the country.

He may have known that the challenges  before him are enormous and that he has to fulfill mandate given to him by Ali, the Customs Comptroller General that he has ‘’asked all the Command  Patrol team Leaders and soldiers attached to the Land border station ‘’to be   loyal and Cooperate with him’’.

He cannot afford to disappoint the Cabal at the Customs Headquarters who had made a case for him to replace Comptroller Kolo, who had started his three months pre-retirement Leave.  His outstanding performance as a one-time Deputy Comptroller, in-charge of  Tin-can Island Command, under the close watch of Comptroller Musa Abdullahi, Enforcement Seat, may have contributed to his appointment to head the Ogun I, Land border station.

. As the Officer  in-charge of the Tin can Island port, Customs Command Enforcement Seat, he had presided over he interception and seizure of three ‘’20’’ Containers, at differenttimes,  shipped into the port  from the European country of Turkey  in 2017, Concealed with large quantities of sophisticated  Pump Action rifles , manufactured from the North American country of the United States,US.

The first ‘’20’’ Container seizures at the Command concealed with arms was with the active participation of the Nnadi’s men. The Container had contained 1,100, pieces of imported Pump Action rifles which had attracted the attention of the Customs Comptroller General to the Command, to show case the  arms seizure to the public.  The second interception of another ‘’20’’ Container, had 475 pieces of pump action rifles, Concealed in it which was said to have belonged to the same importer after detailed profiling.

Many believe that Nnadi, the then Deputy Comptroller overseeing the Tin can Island, Command, Enforcement Seat could make all that appreciable impact at the Command because he had the backing of  Musa Abdullahi Baba, popular, MBA, the Area Comptroller,  who was always  there to order for a detailed profiling of suspicious Containers discharged at the port, particular, Containers loaded with goods  coming from Turkey, home country of the notorious  FETULAH, terrorist Organisation, working closely with other deadly  Groups such as  KKK, PYD, DASH, operating in the Middle East Countries of Iran and Iraq that Recep Tayyip Erdogan, the country’s President had consistently criticized as exporting terrorism to other countries.

Described as ‘’a square peg in a round  hole’’, by Comptroller Kolo, his predecessor, who had appreciated his Cooperation and  support during his tenure, is optimistic  that Compt. Nnadi has all it takes to succeed. Maritime analysts would want him to work closely with the Ejibunu, acting Comptroller, FOU, Zone A, particular,to sustain the tempo of the Command anti-smuggling war and improve on the monthly revenue generation of the Command despite the Idiroko border closure.

Note that the previous Management had made a significant impact in the Command. Take for instance  in the month of August alone, it had generated N72.6 million and made 95 seizures comprising of  4,138 bags of Foreign par boiled rice of ‘’50Kg’’ each, 830 cartons of Poultry products,  15 units of fairly used vehicles and six sacks of Ghana grown  Cannabis Sativa and other illicit drugs, among others.

The Command under Comptroller Kolo, was  said to have  to have also repeated the same  feat in the month of September and the early part of October 2021, before proceeding on his three months pre-retirement  leave.