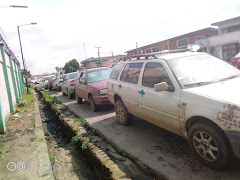 Barely one month after the rugged Jack okpabi, an Assistant Comptroller of Customs and Head of the Federal Operations Unit, FOU, Zone A, Operations and Lagos Roving Team, led a Special Team to Oyo and Osun axis and and  intercepted 36 fairly used vehicles at the Ido Eruwa road in Ibadan, the Oyo state Capital, worth about N10 billion, the team had made another seizure of eight vehicles loaded with 320 bags of ‘50’ of the Asian country of Thailand par boiled rice. The value News Magazine, had  cited  some of the vehicles close to the Government Ware House, Ikeja.

As a prelude to the seizure  of the Contraband vehicles loaded with  Foreign rice, Jack and his Team members  were said to have been working on the smugglers acting on intelligence information gathering over the last two weeks by trailing them to their route  disguised.

Maritime  analysts  believe that the Team may have returned to Ibadan, the Oyo state  Capital  for another Operation to seal the mouth of the state police and Oyo/Osun Customs Commands personnel once and for all.  This is because of the Controversy that had trailed  the  seizure of  the 36 vehicles including Heads of Truck made s by the Team last August.

The Oyo state Police Command, under the close watch of Nwachukwu  Enwonnwu, it was said to have given Hameed Ali, a retired Army Colonel and Comptroller General, Nigerian Customs Service, NCS, the impression that  the Collaboration between  the Police and Customs Patrol Teams in the state facilitated the seizure of the vehicles  and the Trucks Head by the FOU , Zone A, Team.

The Customs boss, was said to have  sent a letter of Appreciation to the Oyo state Police Command  for the Collaboration with his  Officers in the anti-smuggling war in the state.  It was gathered that there may not have been a mention to the Comptroller General  that  the 36 vehicles were intercepted by Usman Yahaya,  boys , after a spectacular operation in Ibadam amidst sabotage by the  security agencies personnel  incuding Customs personnel in the state.

The only mention showing  that the  Command  made the vehicle  seizures was the  message that was said to have been   sent to the Customs Comptroller General  by  Yahaya, the Command acting Comptroller. But that was how  far he could go.

Many believe that Enwonwu, the Oyo state Commissioner of Police  may have taken it upon himself to protect the interest of Helen Ngozi, the Comptroller of Oyo/Osun Command and his officers as doing a good job in the state.

There are people  who were said to have appealed to  Enwonwu, the Oyo  state Commissioner of Police and Mrs. Ngozi, the Customs Area Comptroller, not see Yahaya, the FOU, Zone A, acting Comptroller , who has beamed his search  light in the two  south west states of Oyo and Osun, as coming to expose the rot in the states, but to Compliment their anti-smuggling effort.

They had cited the arrests of 63 suspects by the Oyo/Osun Customs Command  last May at various locations within its Areas of Jurisdiction. The suspects were  said to have been caught with smuggled  vehicles , including   bags of Foreign rice of ‘50’’ each  and other prohibited items in the state. It may have been easy to smuggle Foreign rice, and vehicles, into the country through the state, because Benin Fiscal policy its importation through  its ports as against Nigeria, which had  had banned Foreign rice importation into the country e through the seaport and the land border.The Foreign rice  dealers may not have been importing it  for sale at the Benin domestic market but to push it into Nigeria , which has the market, showing that that the Command had not relented in their anti-smuggling drive.    Indeed, the Command was said to have intercepted 3,465 bags of ‘50’   of  Foreign rice and other items between January and May, 2020.

Recall that President Muhammadu Buhari, had banned the importation of Foreign rice and vehicles into the country through the land borders across the country on January 1, 2017. The Presidency had attributed the policy measure as part of efforts to protect the country local rice farmers in order to make the country self-sufficient in  food  production.

While the ban  on  the importation of vehicles  through the border was said to have been taken to increase patronage of Nigerian ports. The ban  on the importations of these items through the land border  was said to have been quickly quickly followed up with the closure of the borders with the neighbouring West African countries of Benin Republic , Niger and the Central African  country of Cameroon. The border closure, , going by The Magazine findings shows that many of the importers using the Benin seaports and other ports in the West African Sub-region  And the  Central African Country of Cameroon  port of Doula to take delivery of their cargoes to relocate  to Nigeria ports, and thus  an increase in Customs revenue generation because of the increase in the volume of cargo traffic to the nation’s  ports.

At different times, the Magazine had come into contact with some  of the Seme border  based agents whose importers had relocated to Nigeria ports, at the FOU, Zone A, Ikeja, premises  and the Comptroller General of Customs, CGC, Strike Force, premises at the  Wharehouse road, Apapa, processing their clients’  documents to facilitate taking delivery of their cargoes. Going by the Nigerian Immigration Service, NIS, Official map, showing the country’s land  borders,    there are  84 approved land borders control post  and over 1, 400 illegal borders across the country.

In taking the decision to close the  country’s borders with the neighbouring countries, the Katsina born Nigerian President  had given a matching order to Ali to ensure that nothing enters into the country from these countries,  which had been turned into dumping ground  for Foreign manufactured products and Agricultural  goods like poultry items and rice  or leaves the country to these neighbouring countries.

The Customs Comptroller General, in turn, was said to have read the riot Act to the Area Comptrollers at the FOUs and the  Land Border Commands , across the country to tighten up  security at the borders  to forestall the smugglers from carrying out their nefarious activities.   This may have given the acting Comptroller Yahaya of the FOU, Zone A,, the opportunity to raise Special Teams to  raid the the south west states of Ogun and Oyo , particular,   which share  borders with the Benin Republic,  to Compliment the effort of the Resident Officers in the two states.

The recent seizure of eight vehicles loaded with Foreign rice within Ibadan axis by the FOU, Zone A, led yt Assistant Comptroller Jack  , speaks volume. It clearly shows  that security agencies personnel in Oyo state were part of the syndicate smuggling vehicles and Foreign rice into the country. This is because of the  ease at which the smugglers  smuggle rice and vehicles into the state without fear of floosing it to Customs Patrol Teams on the road.

The intervention of the FOUs personnel in the  various states of the Federation and the large quantity  of Foreign rice and the  number of fairly used vehicles that had been  intercepted from the smugglers  at the land borders  road clearly shows that the FOU Patrol Teams across the country, would continue to be busy  in their anti-smuggling Operations  as the smugglers  who are out a  script  with the Collaboration of their security agencies, including Customs personnel are not ready to stop.

The Magazine learnt that the smugglers  have  tried to penetrate the ranks of the FOU, Zone A, Operations and Lagos Roving Team personnel, using the services of soldiers , but had found Jack, a hard nut to crack as he was said to have refused to be Compromised, insisting that the right thing must be done.

In a related development, what may have proved  to be very  difficult for the Command to do over the years  by ensuring that trucks laden Containers intercepted along the Oshodi-Apapa, Express, are not parked  on the street leading to the Customs Training College appears to have been achieved, no thanks to Ahmadu Shuaibu, a Deputy Comptroller and the Command, Head of Administration, described as an Administrator.

Past Area Comptrollers  of the Command were said to have  had a running battle with the Lagos state Transport Authority, LSTMA, over the parking of Trucks laden Containers on the busy street leading to Customs Training College. The agency was said to have written a   several memos to the Command, pleading with it to create  space in the Government Warehouse to keep the Trucks  to facilitate  the  movement of goods and services.

The one Comptroller   who said to have  come close to meeting the demand  of the LSTMA, officials  was Muhammed Uba Garba, now Zonal Coordinator, Border Drill, sector, 3, Ilorin, Kwara state.

Shuaibu, the Command  Head off Administration, according to insider sources, was said to have forced it down the throat of the Head  of the Government Ware House , to create space at the Ware House and the Mechanical workshop to keep the Trucks and vehicles intercepted from smugglers. He was said to have given the officer and his boys a time limited to clear the road  or be ready for the Consequence, insisting that Customs must not been s Law breakers. The Officers may not have wanted to play into the hands of the  no nonsense Administrator, who knows his onions as they did  not hesitate  in doing what he had directed them to do  to  avoid being queried.

When the Magazine passed through the  street last Thursday, there  were no Truck  laden Containers on the street.  An official of the  Command  who spoke to The Magazine  disclosed  that enough  space have been created at the Government  War House  and the Mechanical Workshop  that can accommodate many trucks at the same time.The Mechanical Workshop, had been littered with seized vehicles  overgrown by weeds over the years.

Given the new order,officers attached to the Command Operations and Lagos Roving, stationed at the Oshodi Apapa  Express way, who are involved in intercepting the Containers  which had Contravened the government  Fiscal policies and transferred to the Command are now channeled either  to available space in  the Ware House or the Mechanical Workshop where it is re-examined and Demand Notice , DN issued to the importer through the Agent.