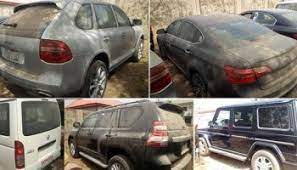 Efforts by VIP, smugglers, mostly Politicians , in Katsina state to penetrate the ranks of the Nigerian Customs Service, NCS, Katsina, Command, which incidentally is the  home state of President Muhammadu Buhari,  a retired Army General , to enable , particular, vehicles from the West African country of Benin and Niger, into Nigeria appears to have  failed them.

This is because, Chedi Wada, a Deputy Comptroller, overseeing the Katsina Customs Command  and who often disguise him self to visit the border Communities where they smuggle under the cover of darkness , vehicles , foreign parboiled rice,  Vegetable oil and secondhand  clothing in the state. Informed sources told The Value News that the smugglers operate mostly on the routes around the Jibiya and Kongolam borders.

Until his deployment to the state, smugglers had a field day because most of the Customs personnel and other security agencies personnel  in most routes that they could easily Compromise them. Acting Comptroller Wada may have made things difficult for the VIP smugglers to know the officers in a particular route because of the constant tinkering of the operational duty roaster. It is not surprising why the Patrol Team Leaders struggle and their  members struggle make seizures on a weekly basis in order to win the ear of the Area Comptroller.

A close source told The Magazine that the Customs acting Comptroller is not ready to take any excuse for an answer, for any Team, which week to week could not deliver on its mandate to make Contraband seizures  given the numerous border routes between , alone and Niger.

The Katsina sate born Nigerian President may have been emboldened to block all the access routes used by smugglers operating between Nigerian and Benin, when he said a told Namadi  Sambo, a former President who had monitored  the Nigerien Presidential election last  year that only God can effectively Patrol  the various border routes between Nigeria and Niger,, believing that the Hameed Ali, a retired Army Colonel and Comptroller General, Nigerian Customs Service, NCS,  officers in the state  have failed to contain the activities of the smugglers who gaining more ground on a daily basis.

But he story appears to be different now as the smugglers are now the one crying out for help as they continue to lose their smuggle goods to  Katsina Command  personnel at the border areas and those on Patrol  on the road.  Between July 8, 2021 and August 3, 2021, which is   less than one month, the Command was said to have seized 13 vehicles and other Merchandise goods in different locations in the state.

Most of the intercepted vehicles had been smuggled into the country in disguise in the past as personal    and later registered with the Federal Road Safety Commission, FRSC, in order to put it on the road for use.

An eyewitness account in one of the border areas in the state told The Value News online Magazine that the Patrol Team officers  and those at the border areas  who have refused to be Compromised for fear of playing into the hands of Wada, the Area Comptroller, ensures that all suspected vehicles are scrutinized to make assurance doubly sure that the vehicle particulars were not forged. The randon scrutiny of suspected vehicles found on most of the roads around the border Communities were said  to have exposed most the vehicles stopped for routine checks as having been smuggled into the country from Benin Republic  through Niger and subsequently registered with the Federal Road Safety Commission , FRSC, and the state Motor Licensing Authority to obtain the necessary documents The suspected smugglers were said to have also forged the NCS, documents , to show that that it was imported through the Lagos port of Tin can Island or PortMulti-services Terminal Limited, PTML.

This may have informed why the officers were able to intercept the large number of vehicle smuggled into the country. Given a breakdown of the number of intercepted vehicles that had aleady been Registered by the FRSC,  an elated Deputy Comproller, said they included a  Toyota High Lander Jeep, 2011 model with Registration No, KBT634LV. and a Duty Paid Value of about N7,16 million, Lexus Saloon, HS250H, 2011 model.  The vehicle which Registration No. KAD 219 CA, has  a DPV ,of N3.648  million and  Mercedes Benz, C230, 2006 model  with  a DPV, of  about  N2.362 million.

Toyota Motorolla and Merdez BEZ, 180, on the list of the seized vehicles, may have been intercepted from the smugglers while attempting to bring it into  the  country  from Niger in order to Register it with the FRSC as a newly purchased car from local car dear with the FRC, in order to obtain the necessary documents that would give them permission to put it on the road. An elated Wada had put the value of the 13 seized vehicles at about N42.104 million.

There were other goods that were said to have been intercepted  and seized by the Katsina Command   which included  314 bags of Foreign bags of rice of 50Kg each, valued at about  N7.6 million, based on the available price in the Nigeria market,  21 bags of Foreign fertilizer, with a DPV, OF N154,350.00 and 14 kegs of 25kg each, of Premium Motor Spirit, PMS, popular,  Petrol,   valued at about, N61,6000, based on the retail price at a Nigerian filling station.

Ther wee other products that were said to have been seized by the Command with the strict supervision of the Patrol Teams and officers at the various border checkpoints in the Nigerian President home state which includesd  Motorcycles, a major means of conveying  smuggled foreign rice into the state from Niger,  Animal Feeds,  Soya Beans,  Foreign Spaghetti,      Vegetable oil,   and Dates Nuts.

The no- nonsense Comptroller of Katsina Command  had had put the value of the seized goods at about N18.072 million, thus  bringing  the  total value of  the various Contraband goods and vehicles seized in the state within the month the one month review to  about N60. 12 million.

Most of the VIP smugglers in the state may have  gone underground for fear that DC Wada and his officers would not spare them if found with any smuggled vehicle on the ground, thus leaving the coast for  the low flying smugglers who are paying the price on a daly basis  by losing their smuggled goods and vehicles to  theCommand Patrol Team officers on the road and those at the border checkpoints.

The Katsina Command anti-smuggling officers may not  have been going for the interception and seizure of Contraband alone but also  for the smugglers   in order to be tied  Court for economic saboatege .  The Patrol Team officers was said to have arrested three smugglers in the discharge of their duties  without   any exchange of bullet This may have informed why DC Wada, could beat his chest, ‘’ I will continue to thwart the antics of the smugglers to smuggle Contraband into the country from Benin Republic or  and Niger.

Many believe that smuggling in the Katsina state, in the recent have reduced significantly because of the renewed strategies  that had  been put  in place by the Command  and the regular engagement with the stakeholders at the border Communities to compare notes.

Appealing to smugglers’’ to get involved in genuine business to avoid running into trouble with his officers on the road, who will always strike at the smugglers at  any time they have credible information to do so to further frustrate them.

He may have given the people a soft landing when he said ‘’my doors are open for advice  on any genuine business venture that would help  any one ready to turn a  new leaf  instead of engaging in smuggling that would never help him or her on the long run   because of its ‘’high  consequences of  losing the goods to government’’.