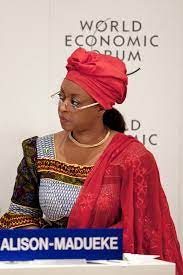 Barely six years of leaving office as    minister of  Petroleum Resources during Goodluck Jonathan Presidency, Diezani Allinson –Madueke, a one-time Executive Director, Shell Petroleum Development Compmany, SPDC, has never known peace. This is because past and present Leadership of the Economic and Financial Crimes Commission EFCC, have been after her over alleged cases of financial misappropriation while office.

Unknown to the former Petroleum minister the EFCC ,had beamed its searchlight on  her while in office. It was  a matter of time for the alleged financial Crimes Committed by her and others in office to be exposeed. The opportunity came cam in 2015, when the then President Jonathan lost the general elections to Muhammadu Buhari, a retired Army General and Candidate of the All Progressive Congress, APC.  The  former Petroleum  minister may have known that the bubble has burst with Jonathan losing the Presidential to the Opposition APC Candidate, who was bent on ruling the cost at  all cost  to implement his anti-Corruption policy. She was forced to relocate to the United Kingdom, UK, to escape the Commission arrest.

Escaping to the UK, may not have stopped the anti-graft agency officials from carrying out their investigations on her.  Abdulrasheed Bawa, a trained detective, who incidentally is the current Chairman of the Commission  was said to have led the investigations on her, making new discoveries on her ill-gotten wealth running into millions of dollars, in both property and cash , which were recovered for the government through Court Condemnation between 2017 and 2019.

Diezani may have had at the back of her mind that with removal of Ibrahim Magu, a Commissioner of Police and former  acting Chairman of the Commission in 2020, by the Katsina state born Nigerian President,  the agency will give her a breather. She got it wrong. This is because the Kebbi state born 41year –old Chairman of the agency, had been involved in investigating her since 2015 and would see to its conclusion.

This may have informed why he could  speak  authoritatively on  Dizani’s loot  in office. The  agency investigations had exposed the 61 year-old Bayelsa state  politician , described as one of the most powerful ministers  in the then Jonatha Administration because of  their closeness. Based on the report  of the investigators on her,  the Commission was said to have   secured   the final Court judgment in 2019,  for the former Petroleum minister to forfeit 80 houses  owned in major cities in the country, particular, Lagos, Abuja, PortHarcourt and Yenagoa, the Bayelsa state Capital.

Appearing before  the House of Representatives,  ad’hoc Committee  investigating the assessment and the status of recovered  loot from past  political leaders and appointees, between 2002 and 2020, who had been found wanting by the Commission on Friday, May 29, 2021, Bawa,  the EFCC Chairman  had put the value of the forfeited houses by Diezani to the government at  about $80 million. He said the houses are still in the agency custody and have not been sold.

He may have shocked the Lawmakers when  he said  the the Commission took a decision this year   to hand over one of the former Petroleum Resources forfeited  properties to  the Lagos state  government  for use as an Isolation Centre for the Asian country of China emerged coronavirus Pandemic, popular, COVID 19. He disclosed that the six flats  of three bedrooms  and boys quarter each owned by the former minister  was  forfeited  to the government   in 2017,  following an order  of a Federal High Court in Lagos Condemnation of it.

Dizani , who is on self- asylum in UK,  may have known that she will be one of the major targets of the Buhari Administration  to be probe by the EFCC, that  she had  invested much of her loot on expensive Jewelries.  The  revelation by  the EFCC, boss when he appeared  before the House  ad’hoc Committee on the basement and the status of recovered assets from looters on  speaks volume.

He had said that the Jewelry  forfeited  by the former minister of Petroleum Resources to the  government was about N14.4 billion. He disclosed  that the Jewelleries had been valued  government agencies and the estimated value was n14.4billion. According to him, the Jewelries included wristwatches, necklaces, bracelets, bangles, earrings, a customized  gold phone and more of such expensive  jewelries  that were said to have been acquired  with  proceeds  of unlawful activities.

Apart from  acquisition of Choice properties in different parts of the country,  She was said to  have also dipped hand into the till  to collect $115 million alleged  used in  bribing  the Independent National Electoral Commission, INEC, officials , both at the state and Federal levels  to ensure that former President Jonathan win  his 2015, re-election bid.  Bawa, the EFCC, helmsman , said that that much  in an interview  published in the April  EFCC  Alert, which is an  in-house Magazine.

Another celebrated EFCC investigated case that has become the talk of many  Nigerians  in the recent time was the James Onanefe Ibori,  a former governor of Delta state loot. There have been news making the rounds that the #4.2 million looted from the state treasury have been recovered to the UK, government and returned to the Niger Delta state which was prompty denied by  Ifeanyi Okowa, a Senator of Federal Republic of Nigeria and now governor of the state.

Iwas also alleged that Abubakar Malami, a Senior Advocate of Nigeria, SAN, an Attorney General of the Federation and minisetr of Justice’s office shared part of the Ibori’s loot. The  rumour became so pronounced that the minister  to speak out, denying the allegations. A Statement issued by  Umar Jibrilu Gwandu,  Special Assistant  on Media and Public Relations , of the office of the Federal Attorney General and the minister of Justice  speaks volume.

Given an insider information  on the recovered loots, Gwandu, the minister Special Assistant on Media, had said that ‘’prior  to the repatriation  of all recovered  assets, Nigeria and all the relevant nations including the UK, had signed  a memorandum of understanding, MOU, as to that the monies  will be  put to  use ‘’, noting that ‘’ the government has been working  in Compliance  with all the provisions of the multi-national agreements reached’’.

Gwandu who may have issued a Statement on the recovered loots may have spoken the mind of the mind of the minister when he said that  the Central Bank of Nigeria, CBN, under the close watch of Godwin Emefiele, have a designated Bank  for all recovered looted funds’’, stating that   Malami, as a person,  or in his capacity as the Attorney General and minister of Justice   have not received  any funds from the recovered assetss. A House of Representatives member had said that the CBN , had paid N2 billion  to Malami, the minister of Justice from  the recovered Ibori loot.

The Lawmaker was said to have cited  a letter from the apex bank which had directed the release  of the recovered looted funds  following  a request  from the office of the Federal  Attorney General and minister of Justice ‘’ to prosecute terror suspects’’.

The Lawmaker  may not have gotten his facts right to justify his allegations against Malami, the Federal  Attorney General and minister of Justice, as Ahmed Idris,  the Accountant General of the Federation  had said on Wednesday , May 27, 2021, that the #4,2 million looted by Ibori, the former Delta state governor has not been received from the UK, government, let alone being returned to the Delta state government.

The  office of Accountant Geneal of the Federation, OAGOF,  may have put to rest the Controversy surrounding the Ibori #4.2 million  loot  when he said that’’ the funds  have not been returned to the country as being speculated’’.  Henshaw Oguibike,  Director of Information, Press and Public Relations  in the OAGF, who had issued a Statement at the instance of the Federal Accountant General,  had said that ‘’the money  is still being awaited’’, noting that’’ no money  has been returned to Delta state’’, a alleged.