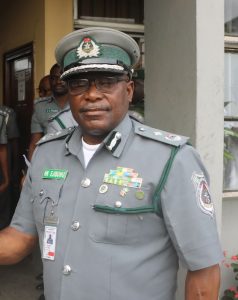 Aware of the big shoes, he is wearing as the acting Comptroleller, of the Federal Operations Unit, FOU, Zone A, Ikeja, Lagos, south west Nigeria, with the retirement of Usman Yahaya, a former acting Comptroller of the Command, described as a very aggressive Enforcement Officer, Hussein Kehinde Ejibunu, a former Commander of Headquarters Strike Force, Abuja, the Federal Capital Territory, knew he has a big task at hand.

The retirement of Deputy Comptroller, Yahaya, who was a nightmare to many of the Ogun, home state of former President Olsegun Obasanjo, state smugglers may have forced them to emerge from their hideouts in their various locations to resume smuggling of the Asian country of Thailand and the North American country of Vietnam par boiled rice and the Indian Agricultural rice into the country.

The smuggled Foregn rice, were said to have been imported through the neighbouring West African country of Benin two seaports: the Autonomous port of Benin, Cotonou and the Bollore port. Ironically, all the millions of tons of Foreign par boiled and Indian Agric. rice imported through Benin are never consumed in the country but  pushed into the Nigerian market through inappropriate routes.

Barely 48 hours of assumption of office, on Friday, September 10, 2021, a Patrol Team of the Command which had gone out   operational vehicle, had broken down on the road while pursuing the smugglers around the Yewa axis.The driver was left alone to fix the vehicle at the mercy of the smugglers. The smugglers may have taken advantage that the absence of the Enforcement officers in the scene to attack and kill the driver to force Deputy Ejibunu and his anti-smuggling officers to soft pedal.

Again, on Saturday, 18, 2021, another Patrol Team of the Command officers  who were escorting  intercepted  and seized sores of bags of par boiled  rice of 50Kg each, and their means of conveyance   to their Ikeja premises  were ambushed and shot somewhere  around Owode, described  as a hotbed of smuggling in the state.

Two of the officers were said to have been hit by the smugglers bullet in the process. The two officers were said to have been quickly rushed to the Hospital, where they are receiving treatment. This may have forced the FOU, Zone A, acting Comptroller, to reach out to the Paramount ruler of the Owode border Community to plead with to call on the Youths who are aiding and the abetting the smugglers in their nefarious business to stop to avoid forcing he officers resort to’’ the Rule of Engagement in War’’,if their life is under threat to defend themselves. The Owode Community Traditional Ruler may have gotten the  message  that he was said to have promised to take up the matter with the people to avoid a breakdown of Law and order in the Community.

There are indications that the FOU Zone A, acting Customs Comptroller, also plans to visit the Traditional Rulers and Chief of other Border Comunities in the state to sensitize them on the dangers of smuggling  and its adverse effects to the  economy.

He was said to have also made plans to visit other security agencies Chiefs in Lagos and other south west states  to solicit their support and Cooperation in order  to  sustain the tempo of the anti-smuggling war in the region because of its destructive effect s on the economy.

An aggrieved Deputy  Comptrolle Ejibunu, may have sent a message to the smugglers operating in the  entire south west geo-political region, particular, Ogun and Oyo states  that  he will not  ‘’allow any of his offices  to be matcheedt to death like goats,’’, stressing that ‘’there are Legitimate   businesses  which the smugglers could easily switch to and earn a living’’.

He noted that the smugglers have no reason to vent their anger on Customs personnel who are not responsible for banning the importation of Foreign par0boiled rice and vehicles, through the Land borders into  the  country.

This is may have informed  why the FOU, Zone A, Customs acting Comptroller, who  may look Calm, in his actions,  had said that’’the service does not make Laws  but responsible  for the implementation  of the government Fiscal policies and Laws’’, noting that ‘’the NCS, draws its powers from the Customs and Excise Management Act, CEMA, Cap, C45. LFN 2004, as amended’’.

Ejibunu, may have sent a message a message to the patrol Team Leaders and their officers, that they must go out and make seizures instead of hobnobbing with the smugglers who are enemies of the country.  The number of vehicles and motor-cycles, which are the major means of smuggling par boiled rice and poultry products in the south west geo-political region,  appears to have exposed the anti-smuggling officers that thy may have turned  their eyes for some of the smugglers to pass unnoticed in their various illegal routes.

An elated Ejibunu , had confirmed that the Commmand intercepted and seized 33 vehicles, loaded with different items, ranging from Foreign par boiled rice, used tyres, second hand clohing to poultry products.  In one of the seized vehicles, bags of gas, were used to Conceal tens of 50 Kg each bags of rice while another in another seized vehicle, cartons of biscuit , were used to Conceal the  bags of Foreign rice of  50Kg each.

The more worrisome was the use of Aliko Dangote, a business mogul, Cement trucks, to smuggle Foreign rice into the country.  As at the time of writing this report, three of such Dangote , trucks, intercepted with Foreign rice, are parked in the Government Warehous, Ikeja, awaiting for further instructions, whether it would be seized or released to the Dangote Cement Company.

The Customs Comptroller had said that most of the seized vehicles and mototor cycles, were abandoned in the bush   by the cross  border smugglers  , on sighting the Command anti-smuggling officers coming to avoid arrest.   Most of the vehicles and motor Cycles, used as a means of Conveyance of the seized items , wee  were said to have been intercepted around the Ilaaro and Ojodun , Abeokuta, axis of Ogunstate.  Note that there  a rove 100  illegal routes that could be used by smugglers to carry out their nefarious trade I the state, compared to Seme axis, that has only one route: Lagos Seme route but several Creeks that  dotted the Badagry and Owode axis.

Deputy Comptroller, Ejibunu, who is out to convince his  critics, that had  said he is not the best anti-smuggling officer, to be sent to FOU, Zone A, because of the enormous demand, notwithstanding having being the Commander of the Headquarters Strike Force, has demonstrated that he would deliver on the mandate given to him by Ali, the Customs Comptroller General.

The Customs Comptroller had confirmed that some of the seized rice and gallons of Vegetable oil, made by the Command between September 10, 2021, and September 21, 2021, were evacuated from wares, on information. In one of the Whar houses raided by the Command, 600 gallons, of 25 litres each was evacuated to the Government Warehouse, Ikeja. The good news was that the Warehouse which was used in Concealing the gallons of Prohited Vegetable oil have been sealed and will be reopened on the orders of the Customs Authorities.

There was also a 2015, Merceds Benz, model that was intercepted by a Team and transferred to the Command premises, which have two chasis Numbers, showing how desperate the smugglers have become in the recent time as they are losing out in the smuggling business. The Magazine enquired from the FOU, Zone A, acting Comptroller, if any person, has come to claim the vehicle but responded no. He had said that whoever   shows up to claim the Mercedes Benz Car, would be arrested, detained and prosecuted

At present five arrested suspects in their hideouts in Lagos and Ogun states, allegedly involved in conducting series of covert operations are in their custody, awaiting to be dragged to Court.

.The Cumulative  values of the seized Command, within the 11 days, that Deputy Comptroller Ejibunu , has direted the Affairs of the FOU, Zone A, is put at  about  N115.6 million. While conducting Journalists round to see the intercepted and seized goods, more seizures were being turned in including a Dangote , Truck, Concealed with Foreign rice but yet to be examined to ascertain the quantities.

Many believe that that the Command could achieve all that much in eleven days, because Ejibunu, the Customs Comptroller, has given a level playing field to all the Command Patrol Team Leaders and their officers to deliver on their mandate or be withdrawn to the office.

Ejibunu , may have proved his critics , wrong as he showcased his performance  between , September 10, 2021 and Septer 21, 2021, aninterval of 11 days, which was very revealing. According to him, the Command, under his Leadership,  had made 3, 253 bags of Foreign rice of 25 Kg each, 383 Kegs of 25 litres each of Premium Motor Spirit, PMS, popular, Petrol,  383 cartons of Chemicalised Foreign poultry products,  50 bases of second hand clothing,  246 pieces of used tyres, 642 kgs  of25 litres each of Vegetable oil and two used vehicles. This is in addition to 16 sacks of 288 pairs of used shoes and 13 units of used motorcycles.

Under Deputy Comptroller Yahaya, the FOU, Zone A, former  boss, the  Command Operations and Lagos Roving Team, headed by Jack Okpabi, an Assistant Comptroller, had dominated the anti-smuggling operations, making major seizures, of trucks load of rice in Ogun and Oyo states, that had attracted the Condemnation of the Senate Committee on Customs.

One of the raids in a popular market in Ibadan, Capital of Oyo state in which over 2000 bags of 50 Kg each was seized  had resulted in the invitation of the Customs Comptroller general to appear before the Senate Committee on Customs over the continued harassment of the people doing Legitimate business by his men.  Deputy Comptroller, should expect to get the rough side of the Senate Committee on Customs as he intensifies his anti-smuggling in the south west geo-political region.