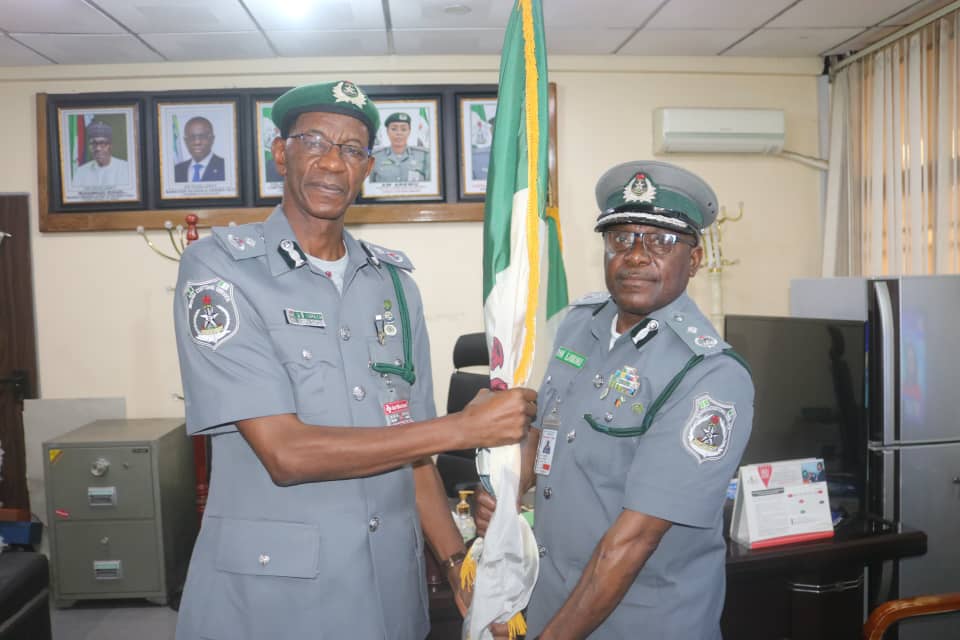 Barely 48 hours after Husein Kehinde Ejibunu,  the Kogi state born Deputy Comptroller of Customs and former Commander, Headquarters Strike Force, Team Abuja, the Federal Capital Territory, FCT,  assumed office as the  Area Comptroller of the Federal Operations Unit, FOU, Zone A, with the retirement of Usman Yahaya, On Friday, September 10, 2021, he got  his first baptism of fire from the smugglers in  Ogun, home state of Former President Olusegun Obasanjo.

The south west geo-political region smugglers, over the last one year, have had a running battle with the Command Operations and Lagos Roving Team officers in Ogun and Oyo states, particular. At different times the smugglers had dared the retired former acting Comptroller, Patrols Team officers, as the smugglers had laid ambush on them, raining bullets on their Patrol vehicles.

It was not surprising why  there have been Celebrations in the  smugglers camp, in Ogun and Oyo states when information filtered out that the former FOU Zone A, Customs boss, described as the best Enforcement officer , the Customs has ever produced was pulling out from the service, having  reached the mandatory 35 years. These may have forced them to go back to the drawing board on how to deal with DC. Ejibunu, his successor.

The Ogun state  based smugglers, operating in the Yewa and the neighbouring West African country of Republic of Benin Axis,  may have succeeded in sending a signal to the new FOU, Zone A, Area Comptroller,  that he is not going to have it easy with them.

The aggrieved Ogun smugglers who had suffered in the hands of the retired FOU, Zone A, Customs boss and Jack Okpabi, an Assistant Comptroller and Head of the Command Operations and Lagos Roving Team,  were  said to have killed the driver attached  to the Command Patrol Team  at the Yewa South Local  government of the state. They may have succeeded in killing the officer because the Customs Patrol vehicle under his care had developed technical fault   which he had tried to fix.

.The smugglers may have taken advantage of the broken down vehicle and the absence of the armed officers who had gone after the smugglers after dispossessing them scores of bags of 50 Kg each, of the Asian country of Thailand produced par boiled rice and their means Conveyance, which had been prepared to be transferred to the Command premises for proper documentation.

An eyewitness account had said that the smugglers killer gang, who came in their large numbers to  attack the Customs driver , were armed with dangerous weapons ranging from guns, cutlasses, bottles , stones, cutlass and charms and amulets.

Note that Retired Deputy Comptroller Yahaya, may have read the hand writing on the wall that the smugglers may want to fight back in order to put fear on his successor to force him to soft pedal in the Command anti-smuggling war  that he had pleaded with Jack, the command fearless Enforcement officer  to consider it necessary to leave his once in a while to lead tough Operations  instead of sending out  Patrol Teams and be Coordinating the Operations from the office. He may have got the message.

The recent  Killing of the FOU, Zone A Customs driver, may have forced  the Customs acting Comptroller and his Management Team, to go back to the drawing board, and restrategise on how to deal with the smugglers , who may have become emboldened to resume operations in full force   with the exit of Yahaya from the service.   An aggrieved Ejibunu, has vowed ‘’to put the smugglers where they belong’’.

He may have sent a message to the smugglers  that seizure  of smuggled Contraband  and vehicles at the land border and inappropriate routes, would continue,  insisting that suspected smugglers who indulge in  attacking  Customs officers who are  carrying out  their Legitimate  duties would continue to be hunted  down until they are arrested  and prosecuted.

Many had expected that Ade Fandahunsi, a retired Assistant Comptroller General, ACG, of the Nigerian Customs Service, NCS, and a Senator Of the Federal Republic of Nigerian, who incidentally is the Vice Chairman of the Senate Committee on Customs, and who has been criticizing Hameed Ali, a retired army Colonel and the Customs Comptroller General in the recent time to condemn the attack and the killing of the officer.

They  had said  that if the Customs anti-smuggling Team had been involved in killing a smuggler in any of the Communities, in the Border states, they would have been taken to the cleaners by the Lawmakers  and the Customs boss invited to appear before the Committee to answer questions over such killings.

Theophilous Duniya,  a Deputy Superintendent of Customs, and the Command , spokesperson, may have reportedly  spoken the mind of the Customs Area Comptroller, when he said that the attack on the Command personnel and the  killing of  a driver would  not ‘’deter them  from  doing their job  in the interest  of the economy and security of the nation’’.

The smugglers may have known that there is trouble ahead with the killing of the Customs driver as many of them  were said  have been  forced to go underground for fear of being killed by  the FOU, Zone A, anti-smuggling officers, who were said to be boiling with rage.

The frequent killing of Customs anti-smuggling officers carrying out their Legitimate duties may have informed why Ali, the Customs Comptroller General, had advised the officers to ensure that  ‘’if  smugglers kill any officer, they should be able to kill, at least two or three of them’’.

Between last year and  the last day of Yahaya, in FOU, Zone A, the Command anti-smuggling Patrol Teams , were said  have been ambushed several times  and bullet pumped into their branded vehicles  and officers bodies, including military personnel that had  accompanied them  in such operations.

Recall that in November, 2020, an  army Lieutenant and two Customs officers were said to have been killed in in  Igbo-Ora own, described as home of smugglers in Oyo state.  The attack on the Command Operations and Lagos Roving team was so bad that that the Border Drill Patrol, Team A, had to deploy their officers to support the FOU, Zone A Team.

In Dec, 2020  hoodlums working with smugglers around the Ayetoro  Area of Ogun state  armed with  Charms and amulets  including other dangerous weapons  had attacked the Command Operations and Lagos Roving Team officers by the smugglers , in a bid to prevent them  from taking  away their smuggled goods which had had been intercepted from them was very fierce .

Although , they  had applied all the known  tricks about the smuggling business to frustrate the AC. Okpabi’s boys in taking away their smuggled goods  but got it wrong.   They were said to have brought the seized hundreds of bags of 50Kg, of smuggled foreign par boiled rice to the Command premises, to the Admiration of  Yahaya, the then Area Comptroller.

Perhaps, the worst clash that the FOU, Zone A, anti-smuggling officers and the smugglers have had with the smugglers in the recent time was at Ibarapa North, Local Government Area of the Seyi Makinde , home state.

Acting on information about how trucks load of rice are coming into Nigeria, from Republic of Benin, through the Border Communities , in the Local  Government, may have  encouraged retired acting Comptroller Yahaya to deploy his men to the Area, in order to dispossess the VIP, smugglers of the trucks load of rice last July.

The smugglers may have prepared for the Customs Team, as they were said to have pumped bullets on their branded vehicles and the body of the six officers on the Team. One of the soldiers in the Team, was said to have lost his rifle in the Igangan attack.

Given that Amotokum, members were involved in attacking the Customs personnel who were carrying out their Legitimate duties, may have informed why the Aotekum Commander in the Ibarapa Local government was killed and one of their guns seized, which the Magazine had sighted in the Command premises last.