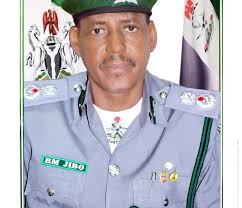 This is not the best of times for  importers , who may have engaged the services of  third party agents or smugglers to bring into Nigeria their Contraband transit cargoes, mostly the Asian country of Thailand par boiled rice, vehicles, Vegetable oil amongst others, imported  through the  Autonomous port of Benin, Bollore port and other ports in the West Afrcian sub-region.

TBello Mohammed, the Area Comptroller,  Seme Command and his Enforcement and Operation officers  may  have fully prepared for the desperate  smugglers,  who may have taken advantage   of Patrice Talon, President of the  Republic of Benin approval for the Nigerian bound trucks laden with cargoes from  Coted’Ivoire,  Ghana and Togo passing through its corridors to pay  CFA9 million , equivalent of N6.5 million was said to have trapped 3,700 of such transit trucks at ILakoji, a border Community between Benin and Togo are no longer finding it funny.

The Nigerian transit cargo importers who are insisting that the Beninois government must revert to the original transit cargo fee of N1.8 million for a ‘’40’’ Container and N1.4 million for a ‘’20’’ Container may have resorted to   exploit other  illegal sources to bring in their Contraband goods into the country . This may have informed  whyMohammed, the Seme Command Comptroller,has reorganised the Enforcement and Operations Units , in order to deal decisively with the smugglers on Land, sea and the Creeks within its areas of Jurisdiction.

Talon, the Beninois President  may have  expected President Mohammadu Buhari, a retired army General to come to Contou  the country’s Capitals for talks as he did  by visiting Abuja, the Federal Capital Territory, FCT, to hold talks  with the Katsina  state born Nigerian President  over the closure of the Land borders across the country with Benin, Niger and the Central African country of Cameroon.

Indeed, the Nigerian President may have sent a message to his Beninois Counterpart that that he may not come to  Benin for such talks for the reopening of the Illakoji border, to enable the Nigerian-bound transit trucks laddn with cargoes to enter into the country. This is evident as he has mandated Geofrey Onyeama, the minister of Foreign Affairs  to take up the matter  with the neighbouring West African country Authorities  and ensure that the trapped Nigerian-bound transit trucks trapped at Illakoji border were  released .

.  Note that the Customs Interventionist Units, Federal Operations Unit, FOU, Zone A, under the retired Deputy Comptroller Usman Yahaya, and his successor, Hussein Kehinde Ejibuno, Border Drills, Lagos. lAgos Zonal Office  Headquarters trike Force , Team  A, and the Seme Command, particular,  have tightened up security around the land border,  to ensure that no Contraband  enters into the country from Benin Republic.

Between July and Tuesday, September 14, 2021, the Seme Command Enforcement and Operation officers, who were said to have effectively taken over full control of the Creeks and other inappropriate routes within the Seme Jurisdiction had made the situation very worrisome to the smugglers that they are losng  both money and  goods, which may have inflicted pain on them.  This is because much of the funds used in funding  such illegal trades may have been borrowed from the banks,  and which must  refunded.

Mohammed, the Seme Comptroller, may have taken opportunity of the large quantities of Contraband intercepted and seized, ranging from   the Asian country of Tailand parboiled rice, Tomato paste, NPK, Foreign fertilizer, Vegetable Oil, Rolls of Cigarette,  used and Bales of clothing, and  used tyres including vehicles, to throw the Government Warehouse at Seme open for Journalists , both electronic, online and print to see things for themselves.

Also, shown to the Journalists who were busy taking the pictures of the seized items at the Government warehouse, was  the West African country of Ghana  grown Cannabis Sativa, popular,   Indian Hemp  and other general merchandise goods and vehicles seized from the smugglers at different locations.

Given an insider information of its anti-smuggling efforts over the last three months, an elated Comptroller Mohammed, who could not hide his feelings, had said that the Command intercepted and seized  244, of various  smuggled goods  with a Duty Paid Value, DPV, of N886 million.

The intercepted and seized items included 10,206 bags of foreign rice of 50Kg each, 44 bags of NPK, Foreign fertilizer, 784 rolls of Foreign Cigarettes, 843 cartons tomato paste, 153 sachets of herbicides and 419 packets of different types of drug and other general merchandise.

This is in addition to 3, 186 parcels of the Indian Hemp, worth about N100 million, which was said to have been handed over to the Nigerian Drug Law Enforcement Agency, NDLEA. The Ghanaian grown intercepted and seized Indian Hemp was said to have been Concealed in sharp sand along the Badagry and Seme road. Recall that last March, the Command had handed over 130 parcels the Ghana grown Indian Hemp to the sister agency, which was received by Udotong Essien, the Commander.

The Command was sad to have also seized from the unrepentant smugglers, 12 sacks of used shoes, 17 sacks of used and seven bales of clothing, 109 units of various brand of vehicles. At present 37 of the cases involving the smuggled vehicles are already in Federal High Court, awaiting Condemnation.  It is instructive to note that in March, 2021, the Command had seized 79 units of smuggled vehicles.

Many believe that the Command could make that much seizure of Contraband from smugglers within the period under review because of the good working relationship between various security agencies at the Land border and the host Coomunities. Some of the indigenes, who were said to have been aiding and abetting the smugglers in the past by volunteering information to them movement of the Command Patrol Teams may have turned a new to support and Cooperate with the Customs personnel which was said to  have  reduced the frequent clash between smugglers  and Customs personnel at the border Communities.

. Take for instance , the Command, had built two  toilet   and four bathroom facilities, including a providing a borehole  for the people and the travelling public at J5, which was said to have been handed over to the  Badagry West Local government and which is currently in use.

The Command, as part of its Corporate Social Responsibility was said to have also registered a Football Club, with the Corporate Affairs Commission, CAC, for the Youths, as a way to keep their mind away from aiding and abetting smuggling activities in the African busiest border Communities.

Perhaps, one major seizure that may have proved bookmakers right was that of Petroleum Products,  Premium Motor Spirit, PMS , popular, petrol, around the Badagry and Seme axis.  The Magazine, had confronted recently the Command Deputy Comptroller, in-charge of Enforcement, over the alleged smuggling of petrol, from Nigeria to Benin Republic but he had denied it, stating that his Enforcement officers are always on the road, making Petrol seizures, which were quickly disposed-off because of its inflammable nature.

The Seme Command Customs Area Comptroller may have shocked Nigerians on Tuesday, when he confirmed that the Command had made a seizure 309 Jerry cans   of 25 litres each and some sachets of petrol of  about 33,000, equivalent of about eight Tankers load  being smuggled out of the country into Benin Republic.  There is no gain saying the fact that as the petrol smugglers have devised  new  methods of taking the illicit product across the border, Comptroller, Jibo, has vowed to pursue  them to their hideout until they turn a new leaf.

They may have discovered that they could easily fall into the hands of the Seme Command anti-smuggling officers using Jerry ans of 25 litres each to load the product and conceal in vehicles or smuggle through the Creeks that they have resorted to the use of sachets to load the PMS, which is easy to carry in trycycles, without proper Customs search on the road.  The trick may have failed them as the Seme Customs boss and his Operation officers have swooped on them.

Note that the Seme Command   is yet to start receiving imports from thirty part countries, from Benin Republic. This may not be unconnected to the unresolved disputes over clearance procedure  between importers, agents from Nigeria and the Republic of Benin shipping Companies, which may have been worsened by the Beninois government economic policies which had forced importers to abandon  3,7000 trucks laden goods at Illakoji Border Community, and several other trucks at the  at Benin two seaports.   However,the Command  collected  and paid into the Federation account about  N718.33 million    from 0.5% ETLS, and1%  NESSS, Baggage assessment between January and August, 2021. That much was confirmed by Jibo, the Seme Customs Comptroller.

The good news was that despite The Beninios government economic policies which have had adverse effect on Nigerian transit  cargo importers,  the country exporters , were still able to exit  635,149,.23 metric tons of locally Manufactured  goods to Ghana, and other countries in the West sub-region.

-on the Economic Community of West African States,  Trade Liberalisation Scheme, ETLS, approved list, with the Free On Board, FOB,  value of about N15. 564 million and the NESS value of N78.204 million.

Under the ETLS, , the Command was said to  have processed and exited 1,314 trucks , from Nigerian, to other West African countries. Aliko Dangote , President Dangote Group of Cmpanies, cement Company was said to have dominated  the ETL market with its cement. Even when other ETLS, Companies are finding it difficult to take their goods to Ghana, Niger, Togo and Coted’Ivoire, because of the Beniniois economic policies, Dangote trucks laden with cement are exited from the land border on a daily basis without any restriction from the Beninois Customs Authorities or other the Gendarmes.