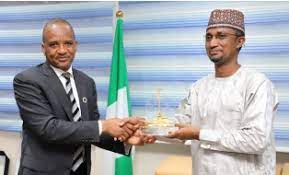 The close working relationship between Bashir Jamoh led Nigerian Maritime Administration and Safety Agency, NIMASA, and the Nigerian Meteorological Agency, NIMET,  appears to have been cemented by the International Maritime Organisation, IMO, a maritime agency of the United Nations, UN.

This is because the two government agencies have initiated a joint effort to close ranks that had been identified by the global maritime Organisation during its last mandatory audit of the nation’s maritime industry which was very revealing.

That much was  was confirmed by Bako Matazu, a Professor and Director General, NIMET, who had paid a Courtesy call on Bashir Jamoh, the NIMASA, Director General, at the agency’s headquarters  recently. Given an insider information on the IMO Audit report, the NIMET, Chief Executive Officer, CEO, had noted that the IMO Auditors had in 2016, conducted a mandatory audit of the Nigerian maritime industry ”to ascertain the Compliance  level with the agency’s maritime security  and efficiency protocols on the country’s maritime domain”.

The NIMET, CEO, visit to his NIMASA Counterpart, may have afforded both agencies the opportunity to agree to immediately set up  a working Committee ‘’to develop an action plan  and implement a Memorandum of Understanding, MoU,  on  the provision  of the things  that had been recognized as missing  from the nation’s maritime  industry.

The Professor had said that that the agency’s target is to ensure that ‘’it provide the meteorological services  to aid  the movement  of ocean going vessels in Nigerian waters. He averred that ‘’that with the Climate change and its increasing intensity, other is no o other time for the Collaboration between the two government agencies than now.  There is no gain saying the fact that NIMET weather forecasts over the years had been 95% in accuracy.

An elated Jamoh, the NIMASA, Director General, had said the Collaboration between the two agencies ‘’is a necessity but not for Convenience’’. He Corroborated Professor Matazu’s views that  that the IMO, during the Audit  of the nation’s maritime industry  some years ago  had identified  some missing gaps , which he had said  can be cloased with effective  Collaboration  among the critical stakeholders. He may have alluded to his own agency, NIMASA and the sister agency, NIMET.

He asserted that that the ‘’Cooperation between the two agencies ‘’is vital for documentation and filling of the missing gaps’’. He may have gladdened the heart of his August visitor, when he revealed that the agency have established a Platform for action and devised other strategies for the achievement of the goals.

The IMO Member State Audit Scheme, IMSAS, was said to have Commenced in 2006, and became a Treaty Obligation in January 2016, ostensibly ‘’to promote   the consistent and effective implementation of the applicable  IMO instruments and to assist member States to improve their capabilities, while contributing  to the advancement  of the global and individual  States  overall performance in Compliance  the instruments to which it is a party’’.

Many believe that as NIMASA and NIMET, have closed ranks, Pirates operating in Nigerian waters and the Gulf of Guinea, troubles have just begun. This is because with the aid of NIMET, forecasts, the Maritime Regulatory agency would be able to deploy its $195 million, Deep Blue Project, maritime assets into Nigerian waters and the  Gulf of Guinea, described as the most dangerous in the world for operations, without missing their targets.

The maritime security assets which was supplied by  HLS International Systems and Technologies Limited included  16 armoured vessels for coastal Patrol,  17 Interceptor boats,  two Special Mission Aircrafts, for Surveillance of Nigerian Exclusive Maritime Zone, EEZ, two Special Mission vessels, three Special Mission helicopters  for Search and Rescue  operations and four unmanned  Aerial vehicles. The good news is that with the Cooperation with the two strategic government agencies, Pirates operating in Nigerian waters or the Gulf of Guinea, may no longer have the opportunity to attack ocean going vessels , let alone kidnap Crew members for ransom without being caught in the act.

It is not surprising why industry stakeholders have hailed the Collaboration between the two sister agencies , describing  it as’’ a step in the right direction’’.