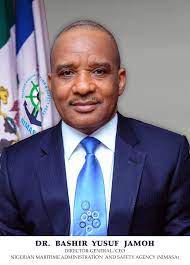 Barely forty eight hours after information filtered out that armed gunmen suspected to be Pirates have kidnapped eight Maritime Workers Union of Nigeria, MWUN, members who were said to be travelling to   Port Harcourt, Capital of Rivers state along   the Kula-Abonnema waterway    in Akuku –Toru Local Government Area of the state appears to have forced  Bashir Jamoh , Director General , Nigerian Maritime Administration and Safety  Agency, NIMASA into action.

,  The NIMASA Director General who was not perturbed by the news of the abduction of the abduction of the eight MWUN, members, believes  that the armed gun have no hiding place as they would surely be fished out.  He was said to have deployed, the agency  Deep Blue Project  Assets, which include  the Command,Control. Communication, Computer and Intelligence Centre, the C4I, which was said to be equipped with alert capabilities, Coastal identification system AIS and SAT AIS signals all over the world.

The Command Cenre, which  serves also as a liaison  with some international  security networks  for access  to database  for vessel movement , ability to monitor vessels  movement  six years backwards, according to informed sources was geared towards  the realization  of a safe  and secured maritime domain in Nigeria.

The NIMASA boss may have known that the armed gun who had kidnapped the eight MWUN members, would not be able to escape to their hideout to ask for ransom because the agency has the trained personnel to man the Control centre, drawn from the military, and other security agencies including the Maritime Regulatory agency. His happiness was that the control centre will bring to an end the nefarious activities of those perpetuating crimes in the nation’s water ways and the coastal areas through monitoring and intelligence gathering.

Note that in the last couple of years, the armed gunmen, suspected to Pirates and sea thieves had concentrated their attacks to ocean going vessels and kidnap of Crew members who were used as bait to Negotiate for ransom which runs into millions of dollars.

With the support of President Muhammadu Buhari, a retired Army General, and the Federal Executive Council, FEC, which had approved $195 million for procurement of maritime assets, the agency had acquired two Special Mission Vessels, and 17 interception Boats. This is in addition to two Special Mission aircrafts for Surveillance of the country’s Exclusive Economic Zone, EEZ, three Special Mission Helicopters for Search and Rescue operations and four unmanned aerial vehicles.

This may have given the NIMASA helmsman was optimistic that if the armed gun who had kidnapped the eight MWUN, in Rivers state have tried o escaped they would haven fallen into the waiting hands of the Deep Blue Project personnel deployed into  the Nigerian waters and the Gulf of Guinea since February 2021.

He had alluded  to the tremendous gains  in the nation’s  maritime security sphere in the recent time , which  are being recognized world- wide , that  even Kitact Lim, the Secretary General of the International Maritime Organsisation, IMO, had commended the progress  being  made  by the current Management  in area of maintaining security in Nigerian waters.

The no nonsense Jamoh, described as a workaholic in maritime circles may have alluded to fact that the arms gunmen operating in Nigerian waters and the Gulf of Guinea, are now running away from‘’the intense  heat  in the nation’s  territorial waters, to operate in the coastal areas to continue their criminal enterprise  as the agency has begun the enforcement  of the Deep Blue Project’’.

THere is no gain saying the fact, NIMASA Deep Blue Project , personnel,  have stepped up its Patrol the nation’s coastal areas in the recent time ‘’to nip in the bud the Pirates who harass passengers and oil workers in the coastal area. The recent kidnap of eight MWUN, members, along the Kula- Abonnema water ways in Rivers state speaks volume.

The NIMASA Director General who expressed had sadness over the incident ahad mobilised his Deep Blue Project personnel to free the Union members. This is because of his promise to secure Nigerian maritime waters on assumption of duties in March 10, 2021.  They were said to have succeeded in their effort to ensure that the eight abducted MWUN, members regain their freedom with payment of any ransom.

An elated Jamoh was said to have broken the cheery news of   the release of the eight kidnapped  maritime workers   by armed gunmen suspected to be Pirates,  to Adewale Adeyaju,  the Union President-General, who was Completely in the dark and helpless in a ‘’tTelephone conversation on Saturday, July 24, 2021.  The cheery news  was said to have given joy  over the  weekend that he dine and wine with his close associates, expressing his Appreciation to Jamoh, the NIMASA boss  who had  mobilized his agency maritime assets to save  the eight kidnapped members. His happiness is that NIMASA,now has a Chief Executive Officer, CEO, who is working assiduously, day and night to secure Nigerian  waters  and to ensure safety of Nigerians and Foreigners using Nigerian  maritime domain and the Gulf of Guinea.

The good news was that the armed gunmen did not have the opportunity to molest the eight abducted eight MWUN, members,  as they were said in to be in ‘’good physical condition when they regained their freedom’’. Meanwhile, Adeyaju, the MWUN, President -General has promised the  NIMASA helmsman ,  that he will provide  him  with the detailed report  on  the incidents surrounding  the abduction of the eight members of the Union  next week.  The report will g o a long way to assist the agency in the patrol of the coastal to prevent a future occurrence.

The armed gun who may have seen that there is no hope of making money from the eight abducted MWUN, members, who were said to be oil workers, may have escaped to avoid arrest and subsequently tried  under the Suppression  of Piracy and other Maritime  Related Offences, SPOMO Act which was signed into Law by the Katsina born  Nigerian President in June 2019.

Only recently  the Jamoh led agency  had dragged  one Frank  AAbaka and nine other members of  his Piracy gang who had attacked  and allegedly  hijacked a Chinese fishing vessel , FFV Hai  Lu Feng 11, in the coast of the West African country of West African country of CoteD’Ivore  in May, 2021 , to a  Federal High Court in Lagos. Osagie  Edward an Assistant  Director, in the agency Public Relations  Department of the agency had said that  culprits were armed with weapons

The Landmark judgment may have emboldened the  NIMASA helmsman  to reassure Industry stakeholders  that he and his Management Team, will not rest on their oars  to fish out all  the Pirates  and sea thieves operating in the Nigerian Maritime domain  and prosecuted under the tested  legal instrument  of the SOMO Act, described as a major  tool  in Nigerian’s  quest  to the Piracy activities in  the Gulf of Guinea.