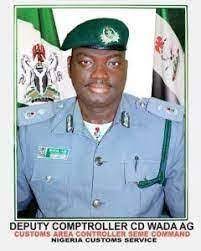 Barely one month after one of the Patrol Teams of comptroller Aliyu Mohammed, led Border Drill, zone 3, Kaduna,  Capital of kaduna state, and who is due to retire in November, 2021, chasing smugglers  in Jibia, a border Community between Nigeria an d Niger,  conveying  Contraband goods   and in the process  crushed seven people to death , another of such incidents  appears to have  occurred in Maidua Border Community, in Daura,  in Daura local government   described as one of  the major routes used  by smugglers  to bring  in Contraband imported through Republic of Benin into Nigeria.

The Kastina state Command, under the close watch of Chedi Wada, a Deputy Comptroller, Patrol Team, which was said to have been involved in the attack may not have been chasing smugglers but had suspected a convoy of vehicles that had entered the Daura -Maidua Highway, to be that of smugglers and subsequently shot at it to force the vehicles to stop. They may got it wrong.

Unknown to the Customs Patrol Team, the Convoy was that of Umar Yau Gwajo- Gwajo, the state Commissioner for Local government and Chieftaincy Affairs, and who incidentally is from Maidua Community.   Informed sources told The Value sources that the Daura –Maidua highway has been identified in the state as one of the major routes used by smugglers to bring in Contraband from Niger into the Nigerian market imported as transit cargoes from Benin epublic.

The Customs anti-smuggling have every reason to suspect the Katsina state Commissioner’s  convoy because of the Statement  by Fatuhu Muhammmed representing Daura/Maidua/Sandamu, , Federal Constituency in theHouse of Representatives  during  plenary session  that massive smuggling of goods  takes place  in Daura, President Muhammadu Buhari , a retired army General, home town.

The Katsina state born Nigerian President may have given an insight why smuggling thrives in the state. He had said that the country has more than a 1,400 Km border routes with the eighbouring West African country, insisting that ‘only God can effectively supervise Nigeria’s borders with Niger.

. This may have informed why the interventionist units in the state Patrol Teams, are very suspicious of covoy of vehicles found around the border Communities and are determined to stop such before it enters into the Nigerian market. Note that the Katsina Command, Customs Comptroller, has the mandate of Hameed Ali, a retired army Colonel and Comptroller General, Nigerian Customs Service, NCS, to ensure that smuggled goods from Niger, imported through Benin Republic, did not enter into the Nigerian market.

Between May 2021, and now, the Patrol Teams, acting on the instructions of the Comptroller, have been very cautious in handling their weapons while chasing smugglers in the around the border Comunities in the state. It was therefore not very surprising why he was shocked that a Patrol Team, shot at a convoy.

Perhaps to get to the root of what happened that may have forced the Team to shoot at a convoy, which was said to have been discovered to be that of the Katsina state Commissioner of Local government and Chieftaincy Affairs Wada, may have encouraged the Customs boss, who was said to have sent an incidents report to Ali, the Customs Comptroller General and the actions taken so far to bring the situation under control.

Addressing Journalists on Wednesday, September 8, 2021, Wada, the Katsina Command, Controller, who could not hide his feelings, had said that  a Committee has been set  up to find out the immediate and remote causes why the Patrol Team shot at the  convoy  believed to that of the Commissioner for Local government and Chieftaincy Affairs.

Describing the incident as ’’unfortunate the incident that had occured’’, he has promised to get to the root of the matter because of his warning to officers to avoid reckless use of guns. In line with the Controller’s directive, the Committee members were said to have started working sitting immediately, with a promise to submit the report soon.

An eyewitness account told The Magazine that such shooting at a convoy of vehicles by Customs Patrol Teams in the state, particular, Jibia, Maidua and major smuggler’s routes in the state would never cease because of the involvement of the VIPS, in the illegitimate trade.

Between May 2021 and now, the Katsina Command Controller and his anti-smuggling officers have made life uncomfortable for the smugglers, particular, the VIP, smugglers, forcing many of them to go under ground, to avoid into the hands of Wada’s men on the road, thus, leaving, sponsored by the  big time smugglers.

Millions of naira worth of Contraband, particular, vehicles, and foreign parboiled rice, were said to have been intercepted and seized from the smugglers which had  inflicted pain and financial  on those  who have lost their goods to the Customs.

During his Wednesday, September 8, 2021, monthly Press briefing, Wada, who was beaming with smile, had said that the Command made the smugglers to suffer huge Financial losses. He noted that during the period under review, the Command intercepted and seized 12 vehicles, with a Duty Paid Value of over N55 million.

One of the vehicles that was said to have been intercepted and seized by the Katsina Customs Command was a MAN Diesel Truck Tipper, with Registration number, EKY684xu, with a DPV, of N8.1million.Another was a 2020 model, Toyota Hilux Jeep with a DPV, of N29.8 million. Another such exotic vehicle seized from smugglers by the Command as the Asian country of South Korea, assemble KIA  Sorrento with Chasis number5XYKKTDA61CG29285, valued at about N2.7million.

The Command was said to have also intercepted and seized  another MAN  Diesel Tipper Truck  with Registration No. JBY12XA worth about N8.1 million. Also seized by the Command  was a Mercedes Benz, CI80, which valuation experts had put at about N2million. Other vehicles that was said to have been intercepted by various Patrol Teams of the Command and finally seized , based on the Customs and Excise Management  Act, CEMA, which is currently , under review were GOLFIII, Volkswagon, Peugeot 504, Peugeot 307, and NISSAN Patrol4WD. Funny enough, most of the intercepted and seized vehicles that were seized by the Command had already entered in to the country and registered by the Federal Road Safety Commission, FRSC,  by the importer, before it fell into the waiting hands of Wada’s men on the road. The Command also made a seizure of about N9.23 million worth of other goods, ranging from foreign parboiled rice,  foreign Macaroni,  foreign couscous,  vegetable oil to  foreign fertilizer, Premium Motor Spirit, PMS, popular , petro and Gas Cylinders of different sizes.. This in addition to second hand clothing and Animal feeds.

An elated Katina Command Controller, had put the cumulative value of the vehicles and goods intercepted and seized by the Command during the two to three weeks under review at about N65.05million.’’We are doing our best to see that people desist from these illegal business and engage in Legitimate businesses’’, Wada had said. There is no gain saying the fact that there have been a drop in the level of smuggling activities in the state in the recent time in the state in the state because of the uncompromising stance of the officers who are working according to instruction of the Area Controller:   Go and make seizures of Contraband and not coming to the office to tell stories.