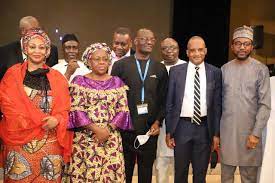 When Chibuike Rotimi Amaechi, a former governor of Rivers state, and minister of Transportation initiated, initiated the ministry of Transport, MOT, retreat last year to rub minds with the Heads of the Maritime agencies, Directors agencies and those in the ministry as a way to enhance  their operational efficiency  and set a new  agenda for the year, it was seen as a welcome development.

On Friday, August 7,  and Saturday, August 8, 2021, the second edition of the MOT, retreat was held in Lekki, Lagos, the nation’s Commercial nerve center.

Edward Osagie, an Assistant Director, in the Corporate Communications Department of the Nigerian Maritime Administration and Safety Agency, NIMASA, had confirmed that   Senator Gbemisola Saraki, minister of state,   Magdalene Ajani, the Permanent secretary and other Directors in the ministry were at the retreat.

In he opening remarks at the retreat, Senator Saraki, the minister of State,, who was said to have been represented Amaechi, the senior minister of TRansportation, had said  that the retreat   was organized  to assess  the performance of the agencies  under the MOT, in order  to enhance  their efficiency and service delivery to Nigerians. ‘’We are here  to assess the progress made so far  in the  nation’s maritime sector in order to enhance  efficiency  in our operation’’, she had said.

She may have gladdened the heart of the Heads of the ministry Maritime agencies when disclosed that this that the President Muhammadu Buhari, Administration over the last six years has achieved a lot in the aresa of rail transportation, maritime safety and security’’, noting that the goad of the Administration ‘’is to do more  to enhance productivity’’.

Jamoh, the NIMASA, Director General, may have used   opportunity of the retreat to speak of the efforts being made by the agency in the removal of the abandoned ship wrecks and derelicts in Nigerian water ways with the approval  granted by the Federal Executive Council, FEC, last April to do so.

`Recall that between 2017 and 2019, Dakuku Peterside, a former NIMASA, CEO, had boasted of plans to remove the over  3,000 ship wrecks  littering the  nation’s coast line but that was how far he could go. This is because he could not back  his words with action thus , giving room to the likes of  Hajia Hadiza Bala Usman, a former Managing Director,  of NPA, and  Maghalu,  her Counterpart in in NIWA, to also,  lay claim of their responsibility to remove the ship wrecks as contained in the ACT setting up their respective agencies.

Many believe that the removal of Peterside, in March 10, 2020, after completing his first term of four years, in office and the appointment ofJamoh,  the then, Executive Director, Finance and Administration , as a replacement  may have  given expedited action for the removal  of the ship wrecks from the Nigerian waters.

Jamoh, described as a strategist, in maritime circles  may have known that the issue of which agency has the responsibility to remove the ship wrecks in Nigerian waters has to be resolved between the contending ageencies: NIMASA, NPA and NIWA, before any  meaningful can be done.  There is no gain saying the fact that the functions of the three agencies on ship wrecks removal were’’ overlapping’’.

Take for instance, section 22  of the NIMASA Act gives  it the power  to remove ship wrecks from Nigerian waters. A further look at the ACT, sections 365 and 366   also made it’’ the responsibility   of the ship owner  to remove a wreck within a specified period., upon notification by the Receiver of the wrecks’’.

Moreso, it noted that  in the  event where the ship owner  was unable to remove the wrecks  within a specified period, or where  the Receiver of the wrecks  is of the view   that immediate action  is required  to secure Nigerian water ways , the Receiver may undertake the removal of the wrecks  in line with  the international standards. This may have informed why  NIMASA Act was said to have  made it clear that the ship owner  would  be held responsible  for reimbursing  the Receiver  of wrecks  for all expenses incurred  in the process   of the ship wreck removal.

The Value News online Magazine learnt that the issue of which agency have exclusive right to remove the ship wrecks in Nigerian waters was exhaustively discussed at one the monthly meeting of the Heads of Maritime Agencies, August, 2020.  At the end of the debate, both NPA and NIWA, were said to have been asked to struggling with NIMASA, on the removal of the ship wrecks in Nigerian waters.

It was not surprising why on August 28, 2020,  the Leadership of NPA and NWA,   agreed to  transfer their wrecks removal functions to NIMASA. The decision by  Hajia Usman, the  erstwhile Managing Director  of NPA and Moghalu,  the NIWA boss, to abide by the decision at  the Heads of the Maritime Agencies meeting   to abdicate  their responsibility of removing ship wrecks in Nigerian waters  to NIMASA, the  may have   may  been communicated  to Senator Saraki, the minister of  state, overseeing the Maritime agencies , who in turn was said to have taken it up with,  Amaechi, the senior minister in the  Federal ministry of Transportation.

Given the decision of the Heads of Maritime agencies as  regards to the approval  of the removal of the ship wrecks, which had been a major problem over the  years, and the ministerial  confirmation, the Federal Executive Council  on April 9, 2021,  gave approval to  NIMASA, to go ahead  with the removal the over 3,0000 ship wrecks that litter Nigerian coastal waters.

There is no saying the fact that for years,  abandoned shipwrecks in Nigerian water ways  had posed great threat  to maritime activities  in Nigeria over the years as they obstruct’’ the free  movement of vessels and  were said to have  in certain circumstances served as hideouts for sea thieves.

With the FEC, approval  , Jamoh, the NIMASA, Director General, who had looked forward for  such opportunity  to come   was said to have  flagged off  the ship wreck removal exercise  in Nigerian waters.

The Maritime Regulatory agency who could not hide his feelings had said had said that the agency had made ‘’arrangements  with the Nigerian Railway Corporation , NRC, which already has a foundary equipment  in Lagos  for the recycling of the ship wrecks’’, with the aim of creating   wealth from such wastes while providing jobs for Nigerians’’.

The ministerial etreat may have also given Jamoh, the NIMASA , boss, an opportunity  to speak on the automation drive  in the agency, which maritime anaallysts believe   had led  ‘’to the integrated use  of Technology  in the issuance of Certificate of  Competency, CoC and, Verification process  which has  drastically  reduced  in the manual verification practice.

This evident going by he report presented  the NIMASA  boss at the retreat which was said to have been reeived with applause.  According to him, in 2020, the number of manual verification  of CoC, dropped from  4,112, in 2019 to 2,750, representing a 33%  drop in manual verification exercise. Giving an insider information, he had said that  ‘’there was a  total online verification  of 9,723 in 2020, fiscal year, alone’’.

He was said to have also  spoken on the efforts being made for the disbursement of the long awaited Cabotage Finance Fund, CVFF,  by industry stakeholders. He had said that the agency was working with the ministry  ‘’to resolve all the grey areas to ensure  seamless distribution of the Fund’’    is in the Single treasury Account , stressing that ‘’there are guidelines, or the disbursement of the Fund.  Note that as at July, 2021, the CVFF, already have about N 132 billion, in the naira Account and $209 million, in the dollar Component, in the Single Treasury Account with the Central Bank of Nigeria, CBN. Informed sources told the Magazine that the Fund has continued to grow on a daily basis as the shipping companies continue to pany the mandatory payment.

The NIMASA ,  ceo, may have shocked Industry  stakeholders,  who  had expected that the agency  will disburse the CVFF , indiscriminately when he  said that one of the guidelines  for the disbursement of the Fund   is the use of   Primary Lending Institution, PLIs.

He had said that the agency   have already advertised for Expression of  Interest from  the interested PLIs, assuring that they are following the  due  process  to ensure  disbursement  according to the guidelines . At present eleven PLIs, were said to have been shortlisted, awaiting ministerial approval.

The ministerial retreat may have also provided opportunity for Jamoh, the NIMASA, Director General,to open up  on the  NSDP Programme.  He was said to have explained  that 446  people have benefitted from the programme from different parts of the country and are currently undergoing ‘’ sea-time Training  while 351  others have been assigned  to maritime Training Institutes and are in the process of boarding  for sea-time’’.

He was said to  have also  disclosed  to the admiration of the minister that   93 beneficiaries  of the NSDP  were alredy undergoing  CoC, while 360 have completed he mandatory sea-time Training and were awaiting the  issuance of the CoC. He may have gladdened the heart of the minister and other people at the retreat when he confirmed that 368 of the beneficiaries of the NSDP project were already gainfully  employed.

On the agency   Maritime  Distress and Safety system, MDSS, equipment  at Takwa Bay and Kirikiri, in Lagos, the nation’s Commercial nerve entre, he noted that  the facility have been fully installed  with the capacity  to cover nine countrieswith in the West and Central African sub-regions. The retreat, according to a close Observer, had exposed Jamoh, the NIMASA, Director General as a workaholic and Perforce because of the number of projects  that have been executed  and other activities  being carried out in the agency including the removal of the abandoned shipwrecks in Nigerian waters.