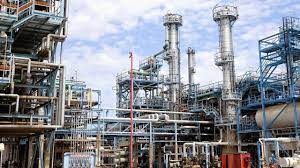 Security Alert, a Publication of the Economic and Financial Crimes Commission, EFCC, in in its latest edition had reported that  the nation’s three existing refineries suffered major loss of  more than N104.13 billion, over their inability  to refine  445,000, crude  oil, daily allocations between February , 2020 and February, 2021. The fallout was that much the Crude meant for the refineries were said to have been refined abroad to the gains of the offshore refineries.

Quoting from the latest report of the of the Nigerian National Petroleum Corporation, NNPC, which shows that from February 2020 to February 2021, the Plants have maintained monthly loses, meaning that the monthly operating costs   far outweigh all the revenue generated by the NNPC, three managed refineries, the Publication believes that something urgent needed to be done by the Authorities to restore the refineries back to life.

Given a breakdown of the loses that had been experienced by the Corporation three existing refineries, the EFCC, Security Alert had reported that in the month of February 2020, alone, the Corporation had lost  N9.36 billion , from the inactivity of the refineries March, N10.3 billion, April, N9.69 billion , May, N9.55billion, while it was said to have suffered N8.62 billion in  the month of June.

In the month of September 2021, the EFCC Security Alert, had reported that   the refineries lost NN7.04 billion, October, N5.49 billion, November, N5.99 billion and December and N8.62 billion. The loses were said to of continued this 2021, as the Corporation was said to have made a loss of NN5.37 billion, in January and N6.88 billion  in February , respectively. The Corporation had admitted that that th loses came about as ‘’the refineries were unable to refine Crude oil, within the thirteen months. It was said to have attributed the zero percent performance of the refineries largely due to the ongoing rehabilitation works in the Plants. Officials of NNPC, are optimistic that the Completion of the rehabilitation work by the Contractors handling it will go a long way to enhance ‘’to enhance the capacity utilization of the refineries’’.

It is on record that that the Corporation  had been  adopting a  Merchant  plant  refineries  model  since January 2017, which it had  said  too recognisance  of the products  worth  and Crude costs as it noted that  the combined  value  of the  of the three existing refineries   at import parity  price  for the month of February , 2021, amount to about N0.10 billion.

It had added in their  report’’there was no associated Crude plus fright cost from the refineries in February since three was no production. The worry of Nigerians was that in spite of the fact the refineries were out of  production between February  2020 and February 2021, Mele Kyari, Managing Director, still claimed that the Corporation  incurred an  operation expenses of  N6.98 billion on the Plants. According to him, ‘’this resulted to an operating deficit of N6.88 billion ‘’, he had said.

Kennie Obateru,  Group General Manager,  Group Public Affairs Department, may have gladdened the heart of Nigerians  when  he said that  the $1.5 billion that would be spent on the rehabilitation  of the 150,000 b/d , Port Harcourt refinery  was a  step in the right direction. Obateru had said that the Plant had already commenced full production  in part of the facility  but would start  delivering Premium Motor Spirit, PMS, popular, Petrol and Petroleum products in September, 2022.

He had said that the ongoing rehabilitation work of the multi-million dollar, PortHarcourt Refinery,   would be completed in 44 months as the Contractor had already mobilized on sit, reconfirming what what Temipre Sylva, a former governor of oil rich Bayelsa state and now minister of state, Petroleum resources, had said.

Sylva, the minister of state, Petroleum Resources,had said that  the Italian Engineering firm  handling the 1.5 billion contract for the rehabilitation of the PorHarcourt refinery   will be completed in phases. He had said tha twithin the first 18 months, the plant would be taken to 90% production level with the second and final phases completed within 24 months and 44 months respectively. President

Muhammadu Buhari, a etired Army General, had assured Nigerians that he would the refineries to save the country‘s scarce foreign exchange use in the importation of products in to the country. NNPC, may have started the process with the PortHarcourt Refinery  as Kyari, the Managing Director, has promised that  the  Corporation  will continue  the process  in order to deliver  on both  Warri and Kaduna  plants. The $1.5 billion   contract for the rehabilitation of the refinery was said to have been approved by the Federal Executive Council, FEC as the government owned  oil firm on April 6, 2021, officially signed the multi-millions dollar contract with  Tecnimont SPA of Italy.

Given the high freight charges  of importation of Petroleum products into the country, particular, petrol and kerosene,  oil marketers  were said to have urged  the Corporation  ‘’to pile up pressure on the Italian Company  that had won the $1.5 billion contract for the rehabilitation of the 150,000b/d PortHarcourt Refinery, I order to hasten the work  and deliver on schedule.

Gillis –Harry,  President, Petroleum Products Retail Markers Association of Nigeria, who could not hide his feelings had said that if the PortHarcourt  refinery could be rehabilitated and it works, ‘’it will be a welcme idea, insisting that ‘’it was high time  the country, which is a major oil producer  start reefing its Crude in order to create  employment  that would impact positively on the economy, which the World Bank had said was in a sorry state.